A RIDICULOUS SUBPRIME FAIRYTALE plus Tony C. Checks Out Cramer

Once upon a time, there was a great and powerful country called Freemerica. Its people were decent and hardworking and dreamed of one day owning their own home in this leader of all other nations. The people of Freemerica depended on its leaders, President Bungler and members of the House of Ineptitude to protect them from evil forces. Freemericans built roads and bridges, provided all the services, and worked hard every day to make sure their country remained great.

After working strenuously hard for many years, most families looked to realizing their dream of owning their own homes. One such family was the Gullibles. They had heard that there was this nice man, Mr. Glutton, who could help them get the money for their dream house. When the Gullibles told Glutton that they didn’t have enough money for a downpayment or even to make their monthly payments, this nice gentleman told them not to worry because their house was going to be worth so much more they could always get more money to pay for it. The Gullibles were so happy. What a great guy that Mr. Glutton was. He even told them that they could pay a very small amount at the beginning until their home was worth a fortune next year. The Gullibles were more than happy to pay Glutton his commission for all his hard and thoughtful work. Many other families from the Gullible’s community, Suckerville, went to Mr. Glutton for their homes as well.

Now, Glutton worked for the local Bank of Incompetence. This lending institution provided the money for the people of Suckerville and collected the monthly payments. One day the Bank President, Mr. Indulger, realized that there were too many homes and not enough people to fill them so the homes values went down. The Gullibles and the rest of the Suckers couldn’t pay the bills! What to do with all these bad loans? Indulger knew that there was a really rich group of people who worked on Small Street, the Greeds, who would take them off his hands. They were  smart and really wanted to help others. The Greeds had some of the most beautiful offices in the world. They even had lavish fish tanks filled with mostly Cell Fishes (take a moment to digest….now proceed).

Just like the fairytale where a woman spun straw into gold, so did the Greeds spin these bad loans into great investments for others to make a lot of money. In this way, they were so similiar to Mr. Glutton and the people from  the Bank of Incompetence. They smushed all these loans into a nice package, put a bow on it, and it really looked just right to put under their Christmas trees. It was so great that Freemerica had such nice people to help the Suckers because President Bungler and all the members of the House of Ineptitude could play golf and go on vacations since they didn’t have to worry about Freemericans.

The Greeds sold these golden packaged investments to Freemericans who had a lot of money; money they held for the hard-working people like the Gullibles. They sold them to banks from other smaller countries, to school boards, and others looking for safe investments. They even bought insurance to protect their investments. How lucky were the Suckers to have the Greeds! Rumor had it that they even did business in a far away country called the Cayman Islands…there, their money would be safe. All the people of Freemerica were more than happy to see the Greeds make so much money. After all, they were so nice and doing eveything for the hard working people of their country. They deserved every ten thousand dollar bill they earned.

One day a strange plague came over Freemerica. The skies got very dark. There was thunder and lightening and the Greeds went into hiding. The Gullibles and the Suckers stopped getting their money from the Greeds for their safe investments and wanted to know why. It was hard to find out because all the Greeds were on a yacht in a faraway place.

Who was to blame for this mess? Was it the hard-working Freemericans? They blamed Glutton. Glutton blamed Indulger. Indulger blamed the Greeds. The Greeds blamed Bungler and the House of Ineptitude.

It was time to call upon President Bungler and the members of the House of Ineptitude. The phone kept ringing until finally the President woke up. He said that he had the proper “strategery” to fix the problem. Many of the Ineptitudes didn’t agree with him so Bungler promised those who disagreed  a new set of golf clubs if they’d go along with his plan. They relented and immediately planned a big party.

So the people of Freemerica were afraid that they would lose their dream homes. They worked so hard but couldn’t buy enough food for their children or send them to college. Some of them couldn’t even get a job or put gas in their cars. The only ones still smiling were the Greeds, President Bungler, and the memebrs of the House of Ineptitude.

But two superheroes from another planet came down to tell the Freemericans that they can save the day. They claimed to know how to fix the problem. They were even hinting that some of the Greeds could be locked up in the Fortress of Voracians for a long, long time. One of these superheros would be the new President of Freemerica. But the Suckers were skeptical because one had a funny name and the other seemed angry.

Most fairytales end with: And they lived happily ever after. Let’s hope one of the two superheroes can lead all Freemericans to that fitting conclusion. So that ends this ridiculous fairytale that could never possibly happen (to be continued!!!!!).

CEO Ken Powell was on Cramer’s show on September 17th and attributed his company’s success to a focus on productivity that helped offset high food costs and allowed General Mills (GIS) to innovate and build out its brands.  Cramer quote, “This stock is Washington proof.”

The company is doing well overseas too, and there’s plenty of room still left for growth.  About eight years ago (GIS) received only 5% of its sales from outside the United States, now it’s 25%.
Let’s look at the fundamentals: (GIS)

Chart Technicals have broken down the last week as has most others: 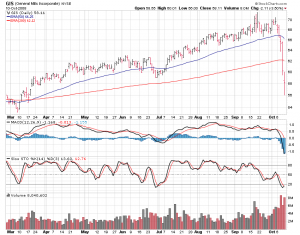 The short term ema is still above the long term ema but I would wait for the other technicals to recover before taking a position on this great equity.

If we owned this equity today, here is how we could make some Blue Collar Money:

Unlike many of the companies in danger of going under these days, General Mills balance sheet is “very solid”.  The company held three debt offerings in the past year and all three were subscribed.  (GIS) has outperformed the market indices for 10, 30 50 years… “any period you want to choose, the CEO said.

Good luck to all!

Last Week’s Economic News (do I really have to do this?):

In an emergency action in conjunction with the central banks in Canada and Europe, the Federal Reserve’s Open Market Committee (FOMC) cut its target Federal Funds rate by half a percent to 1.5%. Wall Street did not receive this news favorably! This was obviously an attempt to infuse liquidity through the world’s banking system and to bring confidence to the global financial system.

A sharp drop in consumer debt was mainly attributed to falling demand for autos thereby resulting in fewer new car loans.Also the trade deficit declined by 2%, a reflection of a worldwide economic slowdown (sorry folks, just reporting the news, not creating it).

Stocks whose Industry is Showing some Positive Signs:

This is the first time I can remember where virtually none of my watchlist equities are trading above their moving averages. This disaster will turn into incredible opportunity down the road. There are a few stocks whose Industry is drawing what little new institutional money is coming into the market. Whether you are actively trading at this time or waiting on the sidelines, it can only help to maintain a top-notch watchlist. Here are a few from my watchlist:

Only a few seats remain for this month’s webinar.

Posted on October 12, 2008 by Alan Ellman in Investment Basics

6 Responses to “A RIDICULOUS SUBPRIME FAIRYTALE plus Tony C. Checks Out Cramer”

Click here to cancel reply.
← Commingling of Asset Classes plus History Tells Us Not To Worry
MUTUAL FUNDS – The Answer in these Volatile Times? →