Never sell a covered call option or a cash-secured put for a stock with an upcoming earnings report. This is one of the most important rules in the BCI methodology. As a matter of fact, most other principles I refer to as guidelines because there is some leeway or flexibility to them. For example, the 20%/10% guidelines allow us to veer slightly from those specific numbers.

The most obvious reason for avoiding these quarterly publications is that a disappointing report can result in a dramatic decline or gap-down in share value wiping out the option credit and potentially much more. We must avoid this risk. The good news is that we know the date of the report and so we can maneuver around them in various ways and thus totally eliminate earnings report risk…problem solved. Earnings dates are highlighted in our Premium Member Stock Reports as shown in the screenshot below: 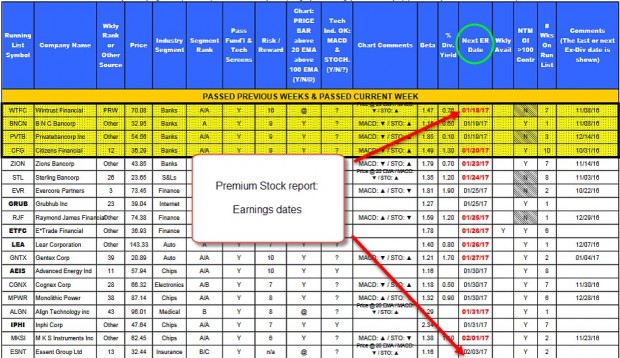 The red arrow points to the column with earnings dates and the gold rows highlight those stocks that report in the current contract month.

Just as reports can disappoint resulting in a gap-down, they can positively surprise culminating in a gap-up. On 8/11/2016, Acacia Communications Inc. (ACIA) reported earnings after the bell and the after-market price took off like a rocket ship from $70.00 per share to nearly $94.00 per share where it closed the next day. The chart below reflects the gap-up in the yellow field:

Gap-up of ACIA after a Positive Earnings Surprise

Most of the time we will not own shares until after earnings reports pass. There are times, however, when we have a lot of confidence in a stock and decide to keep it despite the report. As an example, MKSI had 16 consecutive quarters of “earnings beats” as of February, 2017. I used to own shares through earnings releases with CSCO and AAPL years ago when those companies always muted guidance resulting in positive earnings surprises. If we do take this approach, it still is in our best interest to avoid selling the options until the reports pass. In the case of ACIA, we could have benefitted by the $24.00 gap-up and then written the call after the report passed and price settled down.

Avoiding earnings reports when selling call or put options is a critical rule from two perspectives. By not owning the stock, we circumvent the risk of a gap-down resulting from a negative surprise. Secondly, if we do decide to own the shares through the report, we can benefit from a gap-up in price caused by a positive surprise.

***My thanks to Joan K. for inspiring this article.

Global stocks continued gains this week as reflationary hopes were rekindled by President Trump’s discussion of US tax cuts. Oil prices were steady with West Texas Intermediate crude holding at $54.10 per barrel. Volatility, as measured by the Chicago Board Options Exchange Volatility Index (VIX) fell to 10.85 from 11.15 last week. This week’s reports and international news of importance:

BCI: I am currently fully invested and have an equal number of in-the-money and out-of-the-money strikes.  I was encouraged with the positive earnings surprises that have dominated this earnings season.