Oh no, not another Bernie article! Sorry folks, I couldn’t resist. I have such an interest in this story on so many levels. Madoff was claiming to use a strategy related to covered call writing. The Madoff whistleblower, Harry Markopolos, was involved with a covered call strategy when Bernie was dumped on his lap. I have been focused in on watching the regulatory agencies since the Enron, Tyco and Worldcom debacles and especially as more and more retail investors have joined the BCI community. Finally, I wonder, how does a mind become so demented that one would hurt so many people, friends and relatives included, to generate money that you don’t need and will never, ever be able to spend?

Harry Markopolos was a derivatives expert, a quant as he calls himself, a specialist in quantitative analysis. He was working for Rampart Investment Management Company employing a covered call strategy when his superior asked him the following question: We’re losing too much business to this Madoff guy, why can’t you duplicate what he’s doing? This was more of an order than a request. Madoff claimed to be using a split strike conversion strategy where he would buy multiple baskets of 30-35 stocks correlated to the S&P 100 (not 500). He would then sell out-of-the-money calls and buy out-of-the-money puts on the index. The calls funded the puts. He claimed to adjust his bullish or bearish bias by adjusting the strikes of the options by overweighting or underweighting one or the other. In other words, he was market timing, something no one else can do successfully over the long haul. Bernie’s statements showed his investors that he always went into cash before the market turned down. He was a true miracle maker. 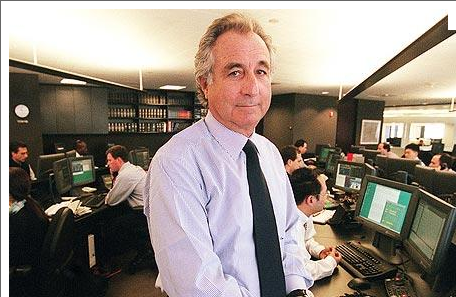 First Harry had to see Bernie’s results to know what he was to accomplish. Much to his shock and surprise Madoff was showing smooth annual returns of 15-16% per year with no monthly loss greater than 55 basis points. Plus, no volatility! If the market was down, Bernie wasn’t. If the market was up, so was Bernie. Ultimately Madoff showed small losses in only 4 of 139 consecutive months. Investors were begging him to take their money, no questions asked.

Harry the quant felt that if Bernie could do this so could he. The more he ran the numbers, the more he failed to achieve these results. Rampart considered him a failure; Harry took exception and was motivated to get to the bottom of this. He developed a team of experts that couldn’t be stopped because they knew that Bernie was a fraud…people lie, numbers do not.

There were a myriad of institutional investors who couldn’t understand these results as well. Bernie was secretive about his formula. He claimed a proprietary “black box” system that gives him trading signals which led to his uncanny success. That was good enough for the “big boys”. Keep generating those returns King Bernie! They had to know something was up but chose to look the other way. Harry and company did not.

Team Markopolos came to the conclusion that there were only two possible explanations:

1- Bernie was front-running or using his broker-dealer business to view large trade orders to then place trades first in his hedge fund operation. This is illegal and would hurt his broker-dealer clients and benefit his hedge fund members. Most of the institutional players thought that this was in fact what Bernie was up to but chose to look the other way as they became richer and richer on paper. Harry felt that this was possible but unlikely to accomplish as he estimated that Madoff was handling more than $7B at that time.

2- Bernie was running a Ponzi scheme. This is a fraudulent operation that pays returns to separate investors, not from any actual profit earned by the fund, but from their own money or money paid by subsequent investors. After tireless investigation Harry was convinced that he needed to notify the SEC that the revered Bernie Madoff was a liar, a cheat and the developer of the world’s largest and most dangerous Ponzi scheme. He feared for his life, for his family’s safety, for his job security as he wondered just how powerful was this Madoff guy and how could he be getting away with this fraud? There was no stopping Harry…go ahead, make my day.

Harry felt that when he brought proof to the SEC, Bernie’s goose would be cooked:

Here were some of the “red flags” he described to the SEC:

Harry’s submissions were ignored time and time again. The SEC failed to protect the investors it was directed to shelter. Another $50B + was lost because Harry was ignored. Incredible! Sad! _________you fill in the blank!

Why was he ignored time and time again? Harry hypothesized that it could be corruption, incompetence, ambivalence or failure to believe that the great BM could be involved in anything fraudulent. Since he never found any definitive signs of corruption, it was probably a combination of the other three with an emphasis on incompetence.

With the collapse of the financial and real estate markets in 2008, investors needed to access their money from Bernie but there was no money there. Ponzi schemes depend on the constant flow of new money and Bernie’s prayers for a miracle were not answered. The hopes and dreams of many good and innocent people were lost; charities could no longer do their good work, Bernie’s son committed suicide as did a French hedge fund manager and Madoff is spending what is left of his life in jail. Incredibly he feels sorry for himself and still is justifying his actions.

A lack of empathy towards others that is coupled with the display of abnormal moral conduct and inability to conform with the norms of the society.  Stealing, lying, lack of remorse for others and towards living beings, irresponsible behavior, impulsive behavior,  problems with the law, violating rights of others, aggressive behavior and much more. This is the definition of a sociopath.

The SEC is now working to become a functional and meaningful agency to protect the folks. Progress has been made in this area. Harry and his team are heroes. They are earning honest livings with their families intact and free to be assets to our society. Bernie has lost a son because of his actions. He has no friends. What’s left of his family has no contact with him as he spends the rest of his life in prison. All over money that he just didn’t need.

Some things in life I’ll never understand….this is one of them.

Economic reports continue to support the notion of a slowly improving economy:

BCI: Cautiously bullish selling an equal amount of I-T-M and O-T-M strikes. Recent volatility due to global issues is the main reason for the caution.

Posted on March 5, 2011 by Alan Ellman in Stock Investing

Click here to cancel reply.
← Short Selling: Positives and Negatives
What is Our Edge? Plus Stock Chart of the Week →