An accepted myth is that covered call writing and selling cash-secured puts are precisely the same strategy. The reason this statement is generally accepted by many investors is that they have the same risk-reward profiles or profit and loss graphs: 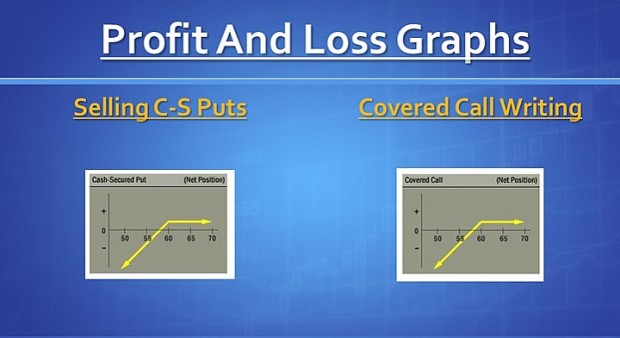 In this article, other similarities will be discussed as well as some distinct differences between the two strategies that will debunk the myth that they are precisely the same strategy.

The screening process and watch lists are the same

Both require the same skill set

Covered call writers (share owners) collect corporate dividends, put-sellers do not. However, due to put-call parity,  put-sellers tend to generate a higher premium when an ex-dividend date comes up prior to contract expiration.

Covered call writers buy the underlying security in 100 share increments. Put-sellers place an appropriate amount of cash into the brokerage account which then “secures” that put.

Use in Self-directed IRA accounts

Covered call writing is universally allowed in IRAs while put-selling is allowed only by certain brokers.

Most brokerages require a higher level of trading approval for put-selling because they feel that it is not as intuitive as is covered call writing.

This is not an issue for covered call writing (assuming no tax issues) because we know our cost basis. For a declining stock, early assignment of a short put may result in a greater loss since notification may not come until the next trading day.

Cost to close when price declines

It will be much less expensive to close a short call than a short put. This is because call value declines with a decrease in share price while put premium increases with a decline in stock price. This will require us to set aside a greater cash reserve to buy back a short put on a declining security.

In bear and volatile markets, put-selling can be used before buying a stock. Using out-of-the-money puts will allow us to buy a stock “at a discount” before writing an in-the-money call. This creates an additional layer of downside protection in challenging market conditions. In this same regard, put-selling can be used in lieu of setting limit orders when there is a desire to buy a stock but at a lower price than current market value.

Covered call writing and selling cash-secured puts have the same profit and loss graph profiles but also differ in many ways. By understanding the similarities and differences between these two option-selling strategies, each investor can make the most appropriate decisions as to when and how to implement these strategies.

Login here and use promo code holiday10 to get a 10% discount on our store items through December 15th for holiday delivery.

To hear a replay of my December 1st panel discussion event hosted by the the Options Industry Council:

They will ask you to register first…it’s free.

Presentation slides correspond to the audio

Hope you enjoy it.

Date and time to be announced

Global stocks boasted solid gains this week, as major US indices set new records and European stocks enjoyed their best week since February. The S&P 500 Index gained about 4.05% for the month, setting a new all-time high. Oil prices dipped slightly this week, with West Texas Intermediate crude falling 58 cents a barrel to $51.10. This week’s reports and international news of importance:

BCI: I am currently fully invested and have an equal number of in-the-money and out-of-the-money strikes. Despite the bullish nature of the market since the election, I would still like to see the economic and global policies of the incoming administration more precisely defined. As a result, I have rejected a more bullish approach for the December contracts and probably for the January contracts as well.