Covered call writers must factor in dividends into our investment strategies. More specifically, ex-dividend dates for these are the dates shareholders must own the shares to benefit from the dividend distribution. Call buyers must exercise the option prior to the ex-date to capture the forthcoming dividend. This makes our shares subject to early exercise (exercise prior to contract expiration). Relating to this topic, I recently came across an email I received a few years ago with a proposed covered call strategy involving dividends and market timing and thought this would be an interesting strategy to evaluate.

The strategy proposed in this email

This was presented by a well-known timing service and I am wondering if there is any merit to this strategy. Here’s how it works:

Any thoughts on this strategy?

I believe that a proposed strategy should be evaluated with an open mind. Whether we accept it or reject it, a fair appraisal will be a valuable learning tool. There also may be one or two ideas that we glean that can be integrated into our current strategy. The learning process never ends!

In my view, the best way to determine the value of an investment strategy is to fully educate yourself in all aspects and then paper trade for an appropriate time frame, usually several months. Here are my preliminary thoughts playing devil’s advocate:

Now based on these initial thoughts it would appear that I am skeptical and I am. But let me go back to my original premise that to really know the value of a strategy we must fully educate ourselves and then paper trade. I hope you find my thoughts useful in the educational aspect of evaluating this approach. These ideas should not eliminate this strategy from our consideration but rather strengthen the basis of our analysis. 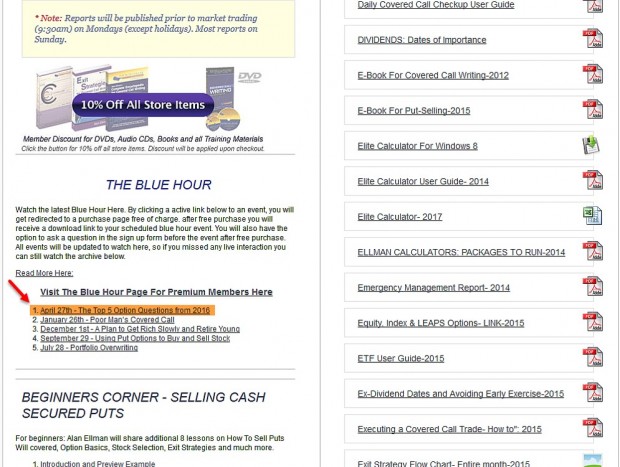 Global stocks edged up for the week as investors focused on positive US corporate earnings and overlooked increasing geopolitical tension and a likely delay in US tax reform. Oil prices declined, with West Texas Intermediate dropping to nearly $50 from last week’s close of $53.25. Volatility, as measured by the Chicago Board Options Exchange Volatility index, dropped to 14.63, down from 16 last week. This week’s reports and international news of importance:

BCI: I am currently favoring in-the-money strikes 2-to-1, a defensive posture, no change from last week

41 Responses to “Covered Calls and Dividends: A Proposed Strategy”

Leave a Reply to Justin P.

Click here to cancel reply.
← New Broker Rule: The Labor Department’s Fiduciary Rule for Retirement Accounts
Calculations When an Unexpected Earnings Report is about to be Released →