Determining the Delta of our Strikes Using the Airport Formula

“What is the best Delta to use when selling covered call options?” I get this question frequently from the educated core of members from our BCI community.  Delta is one of the five option Greeks which are mathematical means of quantifying the risk inherent in our option positions. Delta is one of, what I consider, the “big 3”, with Vega and Theta being the other two. When responding to this question, I realized that my response was similar to a strategy I use when deciding when I should leave my house to get to the airport, a determination I have been making quite frequently as I have been speaking about option-selling almost every month in different cities throughout the US. First, I will provide the three definitions of Delta and then present my airport strategy.

Many consider Delta the most significant of the option Greeks because option buyers depend on Delta to overcome the negative impact of Theta (time value erosion) in order to generate option profits.  This would relate to the first of the three definitions. The second definition is important for those who are measuring overall portfolio risk as many wealth managers seek to approximate “Delta-neutral” portfolios. We, however, are option sellers so we consider the third definition which will determine the chance of exercise…the higher the Delta, the greater the chance of exercise unless we implement one of our exit strategies.

We also know that high-Delta options have an intrinsic value component as these strikes, by definition, are in-the-money. Intrinsic value offers greater protection to the downside but will eliminate the opportunity for additional profits from share appreciation as opposed to low-Delta options (out-of-the-money). These last two paragraphs represent the information we need to know and understand before making option decisions based on Delta. By now, you’re probably wondering what all this has to do with an “airport strategy”

This is all about working backwards, the same way we would determine option Delta decisions. When Linda and I are heading to the airport for a seminar in another city, we decide the night before when we should set our alarm clock. We start with our ultimate goal…be on the plane for an 11 AM takeoff, for example. Start with our end goal and then work backwards. Let’s see now:

That’s 4 hours and 15 minutes which means we set the alarm clock at 6:45 AM for an 11 AM flight. That’s the best time to achieve our ultimate goal to be on the plane for an 11 AM takeoff. We worked backwards.

The key takeaway here is that our ultimate goal will vary based on several factors and so one particular Delta will not benefit us in all circumstances. Here are the factors to consider as they relate to Delta:

Once we have made these determinations we make a portfolio assessment ranging from bullish to neutral to bearish. The more bullish we are, the lower Deltas would prevail. The more bearish we are, the higher Deltas would be more appropriate. We do not start with a specific Delta, but rather work backwards to be sure we achieve our goal of getting on that plane on time or setting our portfolio up based on current information. Generally, we look to near-the-money strikes that meet our initial monthly goals (2-4% in my case) so Deltas would range from 40 – 60 as a guideline. If bullish, we would move the range lower and, if bearish, we would favor a higher range. The chart below highlights a graphic representation of Delta (not the airline!) as it relates to the moneyness of the strike: 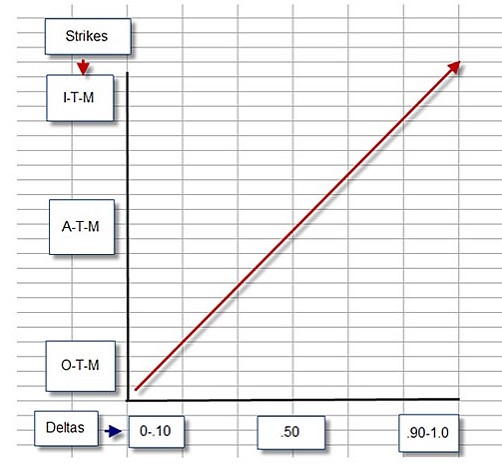 Delta and the Moneyness of Strikes

When deciding on which option Deltas to favor, we must work backwards. We must first determine how bullish or bearish we are for the upcoming contract month and that conclusion will guide us to our Delta decisions. Have a great flight!

Global stocks declined this week as tensions between North Korea and the United States intensified. Oil prices decreased modestly, as West Texas Intermediate crude declined to $48.20 a barrel from $49 a week ago. Volatility, as measured by the Chicago Board Options Exchange Volatility Index (VIX), rose to 15.51 from 9.90 last Friday. This week’s economic and international news of importance:

BCI: I am currently moving to a defensive posture as the September contracts approach, favoring in-the-money strikes 2-to-1. This position may change depending on the geo-political events that surface in the upcoming week.