After executing our covered call writing trades, we immediately prepare for position management opportunities…exit strategies. One of these strategies in our arsenal is the Mid Contract Unwind exit strategy. This is used when share value appreciates dramatically resulting in a time value cost-to-close of near zero. In other words, the option originally sold will be trading near parity (intrinsic value only). Having maxed the original trade, closing at a cost of near zero will allow us to use the cash from the sale of the stock to generate a second income stream in the same contract month with a covered call position using a different underlying security. The better our timing with these exit strategies the greater our level of success.

With the stock now trading at $54.25, the $45.00 call option was deep in-the-money and trading near parity. The cost to close at this time was $9.50 which consisted of $9.25 of intrinsic value and $0.25 of time value. The practical cost-to-close is $25.00 per contract plus small trading commissions. We get to this $25.00 figure by deducting the increase in share value buying back the option produces. Prior to closing the short option position, our shares can be worth no more than $45.00 per share, our contract obligation. After buying back the option our shares are now worth market value or $54.25. It we can then take the cash generated by selling the stock to generate a second income stream in the same month with the same cash we have made greater than a maximum profit for the month.

Why act immediately when the opportunity arises?

There are two reasons why we should react reasonably quickly when these opportunities arise:

1- Share price can decline resulting in a higher cost-to-close.

2- Theta is reducing the time values of the second option positions as expiration approaches.

HOG experienced some negative news about the buyout resulting in several analyst downgrades causing share value to decline from $54.00 to $47.66. With the $45.00 not nearly as deep in the money at this point in time, the time value cost to close moved up to $0.89 ($3.55 – $2.66), more than triple the amount had we acted sooner: 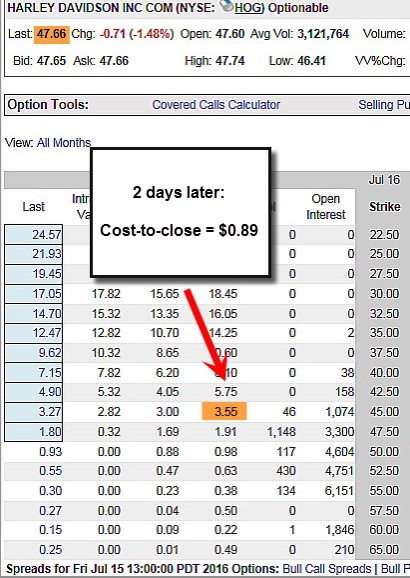 The time value cost-to-close is now $0.89 ($3.55 – $2.66) about 3 1/2 times more than it was two days prior to the price decline. We also find ourselves with two days less time value to generate with our second income-generating position as Theta is eroding option premiums.

There is more to position management than executing these exit strategies. The timing of the management trades plays a vital role in our success as well as the time value of our option premiums can change as a result of Delta (change in share price) and Theta (passing of calendar days) as demonstrated in this real-life example.

1- The recording of Blue Hour webinar #3 discussing long-term investing is now available to all active premium members on the member site (left side, scroll down under 10% discount link). The first 2 Blue Hour webinars are also available in that same area.

2- Blue Hour webinar #4 is one you don’t want to miss. I will discuss the “Poor Man’s Covered Call”, a topic many of you have been inquiring about. The strategy uses LEAPS options instead of actual stocks as the underlying security. There will be a lot of new information presented found nowhere else. Look for the event date to be in late January or early February. 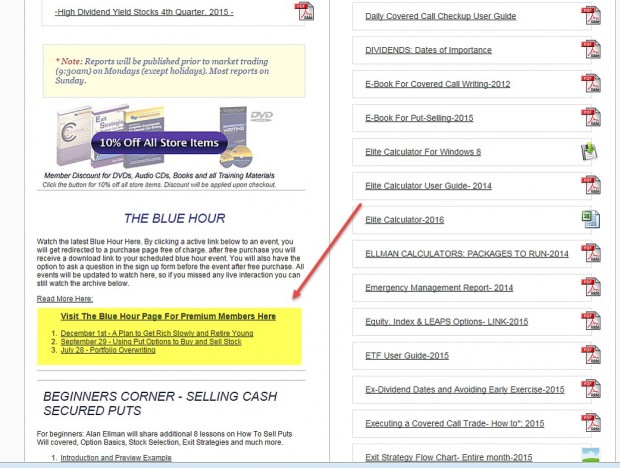 Global stocks edged up slightly after the Federal Open Market Committee’s decision this week to raise the key federal funds target rate by 25 basis points to a range of 0.50% to 0.75%. While the move was expected, markets needed to also digest the FOMC’s statement that it would target three rate hikes in 2017, which was more than expected. The 10-year US Treasury bond yield continued to climb upwards after the FOMC announcement, reaching as high as 2.58% this week, its highest level since September 2014. This week’s reports and international news of importance:

BCI: I am currently fully invested and have an equal number of in-the-money and out-of-the-money strikes. Love the market direction but still feel that a cautious approach is justified.

23 Responses to “Executing Exit Strategies in a Timely Manner”