Exit Strategy Selectivity: Can We Implement Too Many Exit Strategies?

Covered call writers, historically, have ignored exit strategies as part of their investment approach. Certainly, not in the BCI community but most everywhere else. As we become aware of the major financial benefits of mastering the position management skill, we must be mindful of the possibility of over-management. Eating a slice of pizza is enjoyable, eating a whole pie can be painful. In this column we will evaluate the frequency with which we should roll down when one of our securities is declining in value. My thanks to Alan P., one of our premium members, for inspiring this article.

For a free copy of the Basic Ellman Calculator click here.

We’re at breakeven…why not roll down every time we reach breakeven?

On initial glance, it may appear too good to be true that every time we reach breakeven, we can roll down and generate option credits and continue to pile up premium profits. Intuitively, we all know that nothing is too good to be true when it comes to investing in the long-term and that there are no free lunches. If there were, I’d want to meet the folks who are constantly taking the other side of our 100% winning trades and thank them…they don’t exist except maybe in the fantasy world of those 3 AM infomercials (don’t get me started!). Our initial takeaway is that we know rolling down will allow us to generate option credits and that this is an invaluable exit strategy in our arsenal.

BCI guidelines for rolling down: 20%/10% guidelines

Disadvantages of constant rolling down when breakeven is reached

This is where understanding the trade execution process and the option Greeks (factors that influence option premium) will put cash into our pockets. Let’s have a look at the options chain on 8/17/2016 when option value is at 54%, NOT 20%, and the initial trade is near breakeven ($61.15): 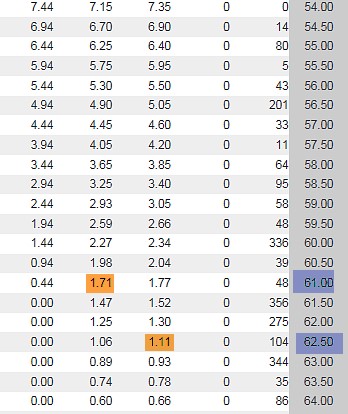 NVDA-Options Chain for Rolling Down

The option chain clearly shows the advantage of rolling down from the $62.50 strike to the $61.00 strike, an option credit of $0.60 ($1.71 – $1.11) representing an additional 1%, 3-week return. Now, let’s dig a little deeper using our knowledge of trade executions and the option Greeks to identify the risks in rolling down in these scenarios.

Paying the difference in the bid-ask spread multiple times

We always buy at the ask (higher price) and sell at the bid (lower price). The difference is pocketed by the market-makers and paid for by us. We must temper and be selective as to how frequently and when we pay the spread to these market-makers.

We should be using online discount brokers to minimize trading commissions but we certainly should not be that kind to our brokers to initiate trades that do not benefit us.

***Locking in greater stock loss every time we roll down

Selling the original call meant that the shares could be worth no more than $62.50 during the contract. By rolling down, shares can be worth no more than $61.00. We cannot ignore the stock side of our trades. If share price rises, we will have to pay for share appreciation in the form of option intrinsic value to capture that rebound. Had we not rolled down, that recovery would be realized.

Every time we roll down and contract time passes, Theta is eroding option premium time value thereby decreasing opportunities to mitigate losses. This is why I generally reserve rolling down to the latter part of a contract.

Rolling down is a key exit strategy in our arsenal but, like all strategies, it has its pros and cons. No free lunches and nothing is too good to be true….it wouldn’t be fair to those on the other side of our trades. But we can certainly be better and smarter than most! Understanding the positives and negatives will guide us to a management approach that will allow us to maximize our investment returns.

For more detailed information on rolling down:

“Strike Price Selection Guidelines” has been uploaded to the “resource/downloads” section (right side) of your member site. This will assist our members in determining which strike price to select based on market assessment, chart technicals and personal risk tolerance.

Global stocks ticked up this week supported by continued improvement in manufacturing and solid US employment figures. West Texas Intermediate crude rose to $54.10 per barrel from $53.10 on increased tensions between the United States and Iran following an Iranian missile test. Volatility, as measured by the Chicago Board Options Exchange Volatility Index (VIX), rose to 10.97 from 10.8 last week. This week’s reports and international news of importance:

BCI: I am currently fully invested and have an equal number of in-the-money and out-of-the-money strikes.  Despite all the bullish signals, I have a neutral to slightly bearish overall market assessment due to concerns about the new administration’s economic policies and their potential negative impact on our stock market. Although more clarity is needed, I choose to take a defensive posture at this point in time.

19 Responses to “Exit Strategy Selectivity: Can We Implement Too Many Exit Strategies?”