Flash Trading- The Pros and the Cons

One of the trading practices discussed in our “David vs. Goliath” analogy comparing Wall Street Insiders to average Blue Collar (retail) Investors is   called flash trading. This article intends to explain flash trading and discuss the pros and cons of the strategy. Here’s how it works:

Flash trading is a controversial computerized trading practice  offered by  some stock exchanges wherein certain traders can utilize  sophisticated,  high-speed technology to view orders which are about to be routed  from one  exchange or trading platform (where the order is not initially  immediately marketable) to another venue quoting at the best price (where the  order is  immediately marketable).  Before the order is routed to an away market, information about the order is “flashed” or displayed (typically for less than 30 milliseconds) on the initial venue’s proprietary data feed to those   traders who subscribe to feed. Put more succinctly, a “flash” order refers to an   order that an exchange posts for a fraction of a second to a select group of traders before the order is published on a rival venue.  Traders who are privy to flash order information have the advantage of   recognizing market movement and sentiment before the broader market (that includes us!).  Thus, one of the primary regulatory concerns in connection with flash trading is that these anointed preferred traders with ultrafast computer technology can trade ahead of these orders and artificially affect the price of a security. In other words, they will benefit from better pricing than you and me. For example, if a preferred trader sees (is flashed) a  buy order for a large block of stocks he may buy “ahead” of this order benefitting from information that you and I didn’t have. This is called front running and is strictly prohibited by the SEC. Many institutional investors who were benefitting (so they thought!) from Bernie Madoff’s strategy concluded he was front running because they refused to believe that he was running a Ponzi scheme.

Flash orders also benefit high frequency traders who seek to profit from liquidity rebates. Many exchanges and ECNs (Electronic Communication Networks) pay liquidity rebates (about one-third of a penny a share) to traders who “post liquidity.” This simply means that traders get paid to route non-marketable limit orders (orders which do not receive immediate executions) to the exchanges that offer such rebates. Because these limit orders are not immediately executed, the exchanges may post or quote these orders to the public, either as a bid or an offer.  Not surprisingly, exchanges that offer liquidity rebates typically charge fees to traders who “take liquidity,” or execute trades against these posted limit orders.  With a flash order, a trading firm can keep its order on a certain exchange for up to half a second without matching an existing buy or sell order on another exchange, which puts it in a position of a liquidity poster rather than a liquidity taker. This dynamic boosts the chance the flash-order trader will complete the trade on the exchange and obtain the rebate before the order is routed to an away market with a better price, in which case it will likely receive an immediate execution and be considered a liquidity taker, not a poster. In the above example, there is an inquiry as to whether there is a trader willing to take the other side of the $50 trade. Perhaps there is someone who wants to “get rid” of his shares quickly and does take the other side. The poster gets the rebate, the buyer gets his price and the exchange keeps the trade at home.

The traders who put the order in allowing it to be flashed can benefit in another way other than rebates….they can send an order designed such that  it immediately cancels after it is flashed, essentially guaranteeing it doesn’t get executed . They do this because their computers can somehow see if there is interest in the order after it is flashed but before it is cancelled….thus they can use the flash order as a way of gleaning market interest without risking execution

It should now be readily apparent that traders aren’t the only ones who benefit from flash trading. Exchanges and ECNs that offer liquidity rebates attract order flow from traders seeking to profit from those rebates. The more limit orders an exchange can quote in a particular stock, the tighter the bid-ask spread is for that stock. A tighter spread means better prices, and exchanges that offer better prices attract even more contra-side order flow, and thus make more money from the resulting executions. In short, exchanges and ECNS utilize flash trading to maintain or increase market share, something the exchanges are constantly in a vigorous battle over.

As of 2009, flash trading represented 2.8 percent of the 9 billion shares traded in the U.S. Recognizing the potential impact posed by flash trading to retail investors, Mary Shapiro, chairwoman of the S.E.C., stated “Flash orders may create a two-tiered market by allowing only selected participants to access information about the best available prices for listed securities.” For these reasons, and in the wake of the recent financial crisis, in September 2009 the S.E.C. proposed banning flash trading to balance the interests of long-term investors and short-term traders. As of the penning of this article, these proposals have not been implemented, though some venues have voluntarily ceased engaging in the practice. Accordingly, it appears that one of the silver linings to come out of this sub-prime/Bernie Madoff/Ponzi scheme debacle is that the SEC appears to be significantly more vigilant in protecting the rights of retail (Blue Collar) investors.

Once again, the economic reports leaned to the negative ending with a disappointing jobs report on Friday:

If there was a silver lining in the economic cloud it was lower gas prices, European countries handling their debt issues and Japan showing signs of recovery from its disasters.

For the past month I have been stressing the extreme volatility we have been enduring in the market as the reason why I am taking a conservative stance selling in-the-money strikes. Take a look at this 1-month, wild-ride DRAMAMINE CHART: 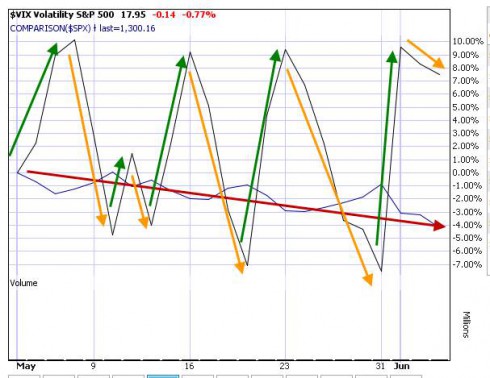 BCI: Cautiously bullish but favoring predominantly in-the-money strikes because of the extreme volatility caused by the above issues.

Hoping for better news next week,

Posted on June 4, 2011 by Alan Ellman in Investment Basics

42 Responses to “Flash Trading- The Pros and the Cons”

Click here to cancel reply.
← What is Our Edge? Plus Stock Chart of the Week
Fundamental Ratios: P/E, PEG and PEGY →