We sell a covered call or cash-secured put and then the underlying company files for bankruptcy. What happens next? How are our positions effected?  Let me premise my remarks by saying how unlikely this scenario is for investors who follow the rigorous screening process of the BCI methodology. But there is a difference between unlikely and impossible so let’s discuss the impact bankruptcy has on our sold call and put options for purposes of furthering the education process.

Options are legal, financial contracts between buyers and sellers. They are not issued by, nor are they the responsibility of the underlying company. Options holders (buyers) have the right to buy or sell shares of stock and sellers of options have the obligation to fulfill those contracts. The risks and rewards of these contracts are contained between the two parties involved therefore the bankruptcy of the underlying company may have significant results for those involved with options. The delivery and settlement of every stock option traded on US exchanges is guaranteed by the OCC, the Options Clearing Corporation.

What happens after a company files for bankruptcy?

If you own put options on stocks of a company that has just declared or filed for bankruptcy, you are in for a huge reward. The delivery and settlement of every stock option is guaranteed by the Options Clearing Corporation. Whoever sold you that right to sell shares of that company at that higher price is obligated to fulfill that obligation, so your profit is guaranteed.

If we sold a put option, we are obligated to buy the shares at the strike price despite the substantial price decline a bankruptcy filing causes.

As the shares drop in price our call options simply expire worthless as the underlying hits rock bottom. The option expires way out-of-the-money

The short call expires worthless and the premium credit is realized. However, the long stock position will convert this to a damaging loss. 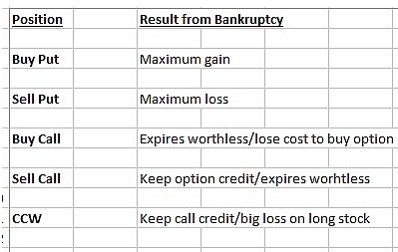 Put buyers and call sellers benefit from bankruptcy filings. Call buyers will lose the cash used to buy the option while put sellers and covered call writers are the big losers. One of the reasons the BCI methodology uses a three-pronged approach to stock screening is to avoid such situations. It is highly unlikely that a company performing on elite levels from all three perspectives (fundamental, technical and common sense) would then move to file for bankruptcy. Highly unlikely but remotely possible.

Global stocks trended sideways this week, slightly up in the US. The Fed appears to be benign regarding future rate hikes and oil may have bottomed. With earnings season approaching, I am feeling more bullish regarding the short-term market performance. The Chicago Board Options Exchange Volatility Index (VIX) dropped to 13.10 from 16.15 last week. This week’s reports and international news of import:

BCI: Moderately bullish, favoring out-of-the-money strikes 2-to-1. Earnings guidance from the last quarter painted a bearish picture moving forward. I believe there will be many more positive surprises due to lowered expectations this quarter (one man’s opinion)

WHAT THE BROAD MARKET INDICATORS (S&P 500 AND VIX) ARE TELLING US
The S&P 500 is currently in an uptrend (higher highs and higher lows) while the VIX (CBOE Volatility Index) is at 13.10. In the past six months, the S&P 500 is up 8% while the VIX has declined by 42%. The near term market trend is BULLISH

28 Responses to “How Bankruptcy Impacts Call and Put Options”