Covered call writing involves first buying a stock or exchange-traded fund (ETF) and then selling call options on those shares. Each contract we sell requires us to buy 100 shares of the underlying. This can be a challenge for some investors who may look for stock substitutes that will lower cost basis and risk. Enter the Poor Man’s Covered Call (PMCC).

What is the Poor Man’s Covered Call?

This is a covered call-like strategy where a long-term option (LEAPS) is purchased in lieu of a stock. Short-term calls are then sold against the LEAPS. The long call gives the option buyer the right to buy the shares at the strike price by the expiration date. Options cost a lot less than shares of stock so the cost basis and cash required are reduced as is the risk. The technical term is called a long call diagonal debit spread (simultaneous purchase and sale of equal number of options of the same class, same underlying security with different strike prices and different expiration months).

Although this strategy simulates the conservative covered call writing strategy, our brokers will require a higher level of trading approval for “spread trading” Check with your brokerage to see what those requirements are and evaluate your ability to meet those prerequisites. 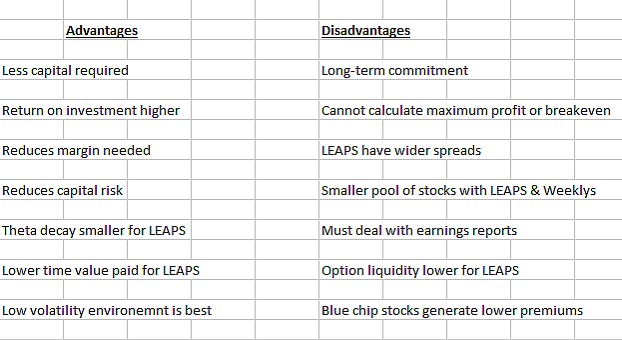 Since this is more of a long-term commitment than traditional covered call writing (it’s more like portfolio overwriting) we are more likely to consider blue chip stocks like those found in the Dow 30, for example. ETFs with similar underlying qualities (like the SelectSector SPDRs, for example) can also be considered. For our initial setup, low beta stocks in a low volatility environment will establish the most solid foundation to initiate these trades.

How a trade is initially structured

Here is the formula:

If we follow this formula, if the trade is closed after share price moves up quickly, we will close at a profit.

Hypothetical example when setting up the initial trade

Feeding this information into the formula:

Long call: Favor far-out expirations with Deltas above .75 (the deeper in-the-money, the higher the Delta).

Short call: Favor out-of-the-money strikes that meet our monthly goals. The time value (also called extrinsic value) of the initial short call should be greater than the time value we pay for the LEAPS

Much like traditional covered call writing the short call must be closed before selling the long call to avoid a risky naked short options scenario. Most management will be on the short call side involving rolling down, rolling out and rolling out-and-up. We have our 20%/10% guidelines in place as with conventional covered call writing and we still factor in earnings reports and ex-dividend dates.

No matter what form the underlying takes, earnings reports are still risky. Since almost all stocks with LEAPS also have Weeklys, we can write calls 48 weeks of the calendar year and avoid the 4 weeks when reports come out. By not writing calls during earnings week, we benefit from price appreciation from favorable reports which should outweigh the losses from negative reports and the lost premium for that week. As a result, we must require the underlyings to have both LEAPS and Weeklys associated with them.

Poor Man’s Covered Call Writing is a covered call writing-like strategy that reduces cost basis and risk. Like all strategies, there are pros and cons to using this strategy and they must be understood and mastered before moving forward with the approach. I, personally, favor traditional covered call writing but realize that it may not be practical in some portfolios so PMCC may represent a good plan B. There are several more nuances and details regarding PMCC, many more than I can include in this one article. I am in the process of writing a webinar with expanded information, more details and real-life examples which I will share in one of our Blue Hour webinars.

The BCI team is grateful for the generous feedback we have received from our members for this event. We will be providing 6 such webinars per year, the next coming between Thanksgiving and Christmas. For those who missed it, we announced these 3 topics for future presentations:

Please continue to send in your ideas for future webinars.

Blue Hour webinars are free to premium members and available for purchase for general members. All presentations are archived on the premium member site.

Global stocks were flat for the week as oil prices surged and a global concern over the health of Germany’s largest lender. Stronger 2nd quarter US growth and signs of improvement in the 3rd quarter were also positives. Volatility, as measured by the Chicago Board Options Exchange Volatility Index, rose to 13.29 from 12.3 a week ago. Oil prices rose due to expectations of an OPEC production cap, with West Texas Intermediate crude rising to $47.90 per barrel from $46.25 last week. This week’s reports and international news of importance:

BCI: My positions for the October contracts favor in-the-money strikes 2-to-1

Click here to cancel reply.
← Exercise Of Options From The Call Buyer’s Perspective
Will My Broker Automatically Exercise Options That Expire In-The-Money? →