RECESSION- A NORMAL Part of the Business Cycle

Generally speaking, the main focus of this column is for Blue Collar Investors to share information that will be useful in generating substantial  income into our investment portfolios. In normal market conditions we locate the greatest performing stocks in the greatest performing industries and use these stocks as vehicles to generate great returns under the safest of conditions. There are certain market conditions that dictate we not sell options and we are currently experiencing such an environment (see figure 1, page 4 of my book, Cashing in on Covered Calls). I am a firm believer, however, that there is never a bad time to learn from our experiences and become better investors even from the horrific predicament our economy is currently experiencing. I recently wrote an article entitled MACROECONOMICS-The Government’s Influence Over our Investment Success that has received national attention from Reuters. This exposure, along with the feedback that I have received from you (thanks for all your kind words) has led me to this current exposition which is sort of a prequel to that one.

Before the government determines its fiscal and monetary policies, it evaluates certain economic indicators and the coordinates of the business cycle our economy is in.For example on Wednesday we were exposed to the following headline: Consumer prices (CPI) fall record 1% on record energy drop. On October 30, 2008 the Bureau of Economic Analysis notified us that the third quarter GDP (Gross domestic Product) decreased by .3 percent (from the second quarter). Media outlets everywhere we turn are announcing that the U.S. has slipped into a recession. Recession…..don’t ever say that “R” word. Life as we know it will come to an end if we’re in a recession! Won’t it? The reality of the situation is that even if we are in a recession, it is a normal part of the business cycle and has been for decades and decades.

Let’s first review the definition of the Business Cycle: The recurring and fluctuating levels of the GDP growth rate over time. On a graph, this is demonstrated by a series of hills and valleys corresponding to the expansion and contraction of business activity. 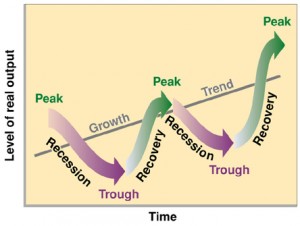 GDP (Gross Domestic Product) is the total value of all consumer goods produced within the U.S. during a given period. It adds up all consumer spending, investments, government spending, and net exports to find the total amount of money spent on goods and services.If the economy is growing at a significant pace, corporate profits will rise thereby causing our equity values to increase. This would be the expansion phase of the business cycle. If, on the other hand, economic growth was contracting, the reverse would be expected to occur.

The Five Stages of the Business Cycle:

3- Peak– Economic growth rate peaks and begins to drop. We usually see a decline in consumer confidence oftentimes due to increased interest and mortgage rates. We should be more conservative in our investment strategy (sell in-the-money strikes for example).

4- Recession…the “R” word- Two consecutive quarters of negative GDP is the most adhered to definition. We are always in a recession long before we know it or until the previous quarters GDP figure becomes public. Consumer demand declines as does corportate production and employment.Needless to say, stock prices decrease and we are bearish investors during this phase.Recessions normally last between 6to16 months with an average of about 10 months. Should a recession last 18 months or more, the economy is said to be in a depression.

5- Recovery– The economy hits bottom and begins to grow. Interest and mortgage rates have dropped causing increased consumer confidence and spending. The stock markets are geared to take off and we must be prepared to take advantage. We’re getting that bullish (out-of-the-money strikes) feeling again.

Most economists would agree that we are somewhere in phase 4 (recession perhaps) and anxiuosly awaiting recovery.It is virtually impossible to precisely predict the future turning points of the business cycle but we do our best by looking at key economic indicators.One that we hear about all the time is inflation.

How Inflation and CPI factors into the Business Cycle concept:

Inflation is the general increase in prices for goods and services. It is measured by the Consumer Price Index (CPI) which I alluded to at the beginning of this article. It is an average of the prices of a basket of goods and services. Changes in CPI are used to evaluate price changes associated with the cost of living. Because inflation normally occurs during periods of economic expansion, stock prices tend to rise at the same time that inflation rates increase. Oftentimes, the government needs to step in to control inflation during periods of economic expansion via its fiscal and monetary policies. For more information on this subject, see my article on macroeconomics.

In summary, a Blue Collar Investor can do his (her) due-diligence in several ways. We locate the greatest performing stocks in the best industries; we identify short-term market tone; and finally we identify the macroeconomics by analyzing the business cycle. Currently, most of us are completely turned off to investing in any segment of our current economy…understood. However, it is never a bad time to learn from even the most eggregious of circumstances; lessons that can make us better investors down the road. What do you think?

Are there any decent looking charts out there? 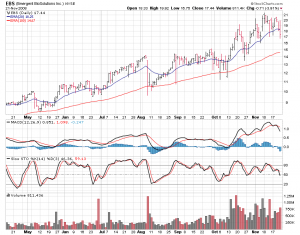 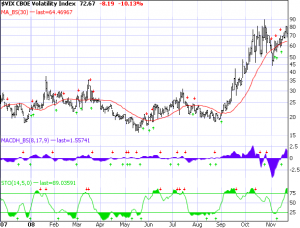 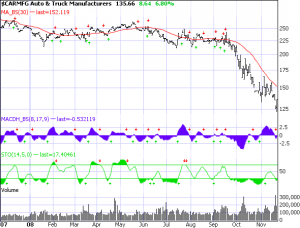 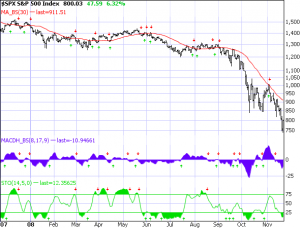 Not a pretty picture but at least Friday was a positive day.

Posted on November 23, 2008 by Alan Ellman in Investment Basics

15 Responses to “RECESSION- A NORMAL Part of the Business Cycle”

Click here to cancel reply.
← MACROECONOMICS-The Government’s Influence Over our Investment Success
The New York Stock Exchange: Part of a Global Conglomerate and a Stock to Watch →