What is a reverse stock split?

This is a reduction in the number of corporate shares along with a corresponding increase in share value. In the above example, a 1-for-2 reverse stock split would result in owning 50 shares at $100.00 per share, still a $5000.00 total value.

Why would a company promote a reverse stock split?

There are several reasons this would make sense, none of which would encourage us to own the stock or exchange-traded fund (ETF).

The chart below tells us everything we need to know why this ETF twice opted for a reverse stock split:

How does a reverse split impact our options?

There is no one formula that will apply to every scenario so we must research these contract adjustments. Here are related free resources:

Let’s view the changes in this specific example:

The multiplier remains 100 so if option price changes by “1” total contract value changes by $100.00

In addition to the newly adjusted contracts (UVXY2), the exchanges begin introducing non-adjusted contracts based on the new market pricing. This creates a scenario wherein some contracts deliver 100 shares while others deliver 20 shares (I’m even getting a headache from this… however, in the interest of education we push on.

When adjusted contracts exist along with standard contracts (100 deliverable), there should be some sort of indication as to which is which. In this case, adding that “2” to contract symbols with an explanatory footnote would do the trick. However, that’s not always the case. In the screenshot below, the options chain shows a $3.00 strike trading between $2.88 – $3.25 for a stock trading at $21.74.  For standard contracts, that is impossible as there is at least $18.74 in intrinsic value. That’s how we know that this is an adjusted contract. 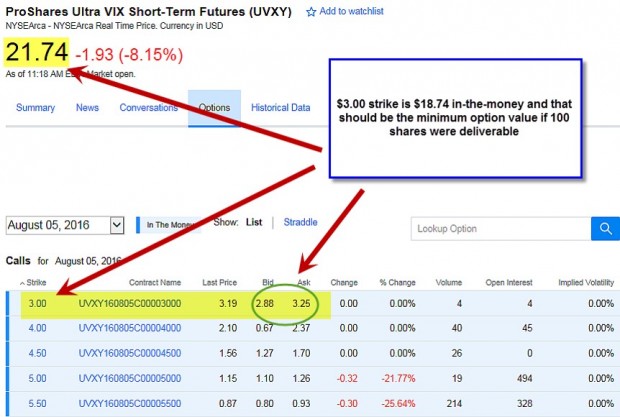 Further down this very same options chain, we see a non-adjusted $20.00 contract with a bid-ask spread we would expect for a stock price $1.74 in-the-money and expiration coming up in a few hours:

Reverse stock splits are generally corporate maneuvers designed to give the appearance of safe, secure and reliable investments. These events will result in contract adjustments for our options and these changes do not always fit one specific formula. It is important to understand the implications of these changes and to carefully view options chains that may not discern between adjusted and non-adjusted contracts. Asking ourselves if the premium amount makes sense for a standard contract will get us to the correct understanding of the contract type.

For more information on stock splits:

Global stocks declined slightly this week while US indices remained flat. The Dow Jones Industrial Average approached the psychologically significant 20,000 mark before consolidating. Crude oil lost about 75 cents on the week, ending around $52.50, while the Chicago Board Options Exchange Volatility Index (VIX) remains historically low, at 11.44. This week’s reports and international news of importance: