Selling Cash-Secured Puts can be used to accomplish several goals; 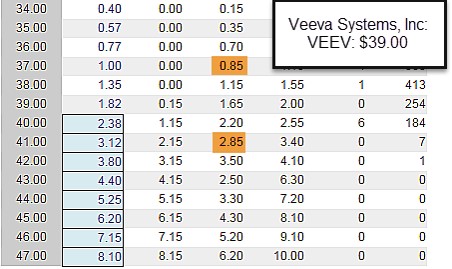 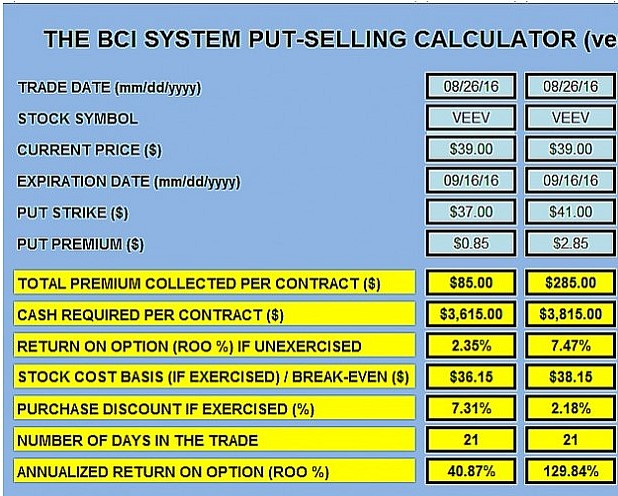 First, notice that the time value components of both strikes are precisely the same. The out-of-the-money $37.00 put is all time value (0.85) and the in-the-money $41.00 put also has $0.85 of time value ($2.85 – $2.00). Given the equality of time value, the strike selection, to a great extent, will be based on our goals which must be identified prior to entering every trade.

Buying a stock at a discount

Since exercise is not an issue, both strikes are in play but since our goal is still cash generation, using the out-of-the-money strikes will give us sound returns and protection to the downside (7.31% in this case).

Using for cash flow only

Here we use the out-of-the-money puts. The more bullish we are, the closer to at-the-money we go. If we are strongly bullish I would favor out-of-the-money covered calls giving us the opportunity to generate two income streams in the same month with the same investment.

The moneyness of put strikes is dictated by strategy goals, overall market assessment, chart technicals and personal risk tolerance. Selecting an in-the-money put strike to generate higher premiums is not a reason for strike selection because the loss of share value on the stock side will counterbalance the additional put premium.

Global stocks continued moving higher on increasing evidence of improved US economic growth and rebounding inflation. Major US indices again rose to record highs during the week, Oil prices dipped, with West Texas Intermediate crude at $53.50 a barrel versus $54.10 last week. Volatility, as measured by the Chicago Board Options Exchange Volatility Index (VIX), edged up to 11.37 from 10.9. This week’s reports and international news of importance:

BCI: I am currently fully invested and have an equal number of in-the-money and out-of-the-money strikes. I remain defensive despite all the positive signs based on the lack of clarity regarding the policies of the new administration.