The Mysteries of a Put Sale

On 8/19/2017, Ron sent me an email detailing a cash-secured put trade he initiated in a virtual account. I saved the email to use in an article because I felt it would be instructive on several fronts. 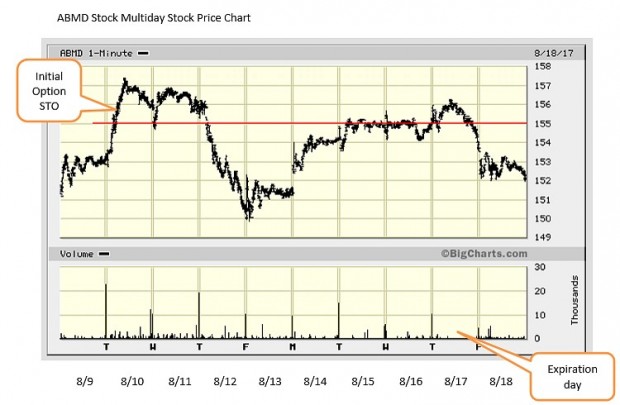 Solving the mysteries of this put trade

Even when a put strike moves in-the-money, exercise will only capture intrinsic value. The option holder would make more money selling the option by capturing both intrinsic value + time value.

Was it really an 8/17 expiration date?

No, it was 8/18. This is a common error made by retail investors and why Ron is so smart using virtual trading initially. The options chain showed 8/17 but the “17” represents the calendar year 2017. Expiration Friday in August 2017 was on the 18th. This is why the option did not expire or get exercised on the 17th.

Buying back options to prevent exercise

The general rule that applies just about all the time is that any option can be bought back prior to 4 PM ET on expiration Friday to avoid exercise. In this case, Ron had until 4 PM on the 18th but thought the option exit strategy opportunities ended a day earlier…lesson learned.

This trade demonstrates the importance of paper-trading before risking even one penny of our hard-earned money. In this example, the moneyness of options, premium composition, expiration timing and exit strategies all factored into the success of the trade.

“How to Select the Best Options in Bull and Bear Markets”

Wishing you much success,

21 Responses to “The Mysteries of a Put Sale”