What Covered Call Writing Has Meant To Me: A Financial Advisor’s Perspective by Guest Author Kevin Crowe

In June 2018 I had the pleasure of having dinner with Kevin, a long-time BCI member and retired financial advisor. His story reminded me of how option-selling not only impacts the investor but also so many of those close to us. In Kevin’s case, it touched members of his family and a large database of clients. This site rarely invites guest authors to post but I felt that Kevin’s history with covered call writing would be both motivating and instructive to retail investors. I asked him if he would be willing to share his story with our community and Kevin generously accepted. During this holiday season and a challenging stock market environment, I felt that this would be an appropriate time to share this story. Now, Kevin’s memoir:

Covered call writing has had a profound influence on my life, the lives of my family, clients and friends over nearly 40 years. I am writing this to share my story with the BCI community.
My name is Kevin.  I am a Bostonian by birth but Charlotte, NC has been my home for over 30 years. I am a retired Financial Services professional of nearly 40 years. During the period that I managed money for clients I used the covered call strategy to provide consistent returns, provide downside protection and steady income streams allowing my clients to retire with dignity and respect.

I first learned of covered calls in the early 1980’s. One day I overheard a colleague say he was writing covered calls for his clients. When I inquired about the strategy, he explained that he was selling Calls on stock the client already owned. He would sell a call at a price above the stock and if the stock price was above the option price (strike Price) at the end of 30 days the stock would be sold, and the client would keep the proceeds from the option and any appreciation of in the stock. He further explained that if the stock dropped in price the client was indemnified against loss equal to the Money (premium) he received for selling the call option.

This had an immediate appeal to my conservative nature and I began to write calls in my own portfolio. Little did I know what an enormous impact this would have upon my family and career.

MY FAMILY
As my daughters began to mature, expenses associated with their maturation began to consistently appear on the horizon.
First out of the box was the need for ortho denture. My wife returned home after a visit to our dentist. She was visibly upset about something She proclaimed that our daughters need braces for their teeth and how was I going to pay for it. My response, ” No worries” I will just sell some covered calls.

Over the next 10 or so years we covered expenses for automobiles, college tuition, weddings and countless other needs, real and imagined. I am happy to say our daughters were eventually able to join the workforce without debt. Needless to say, they have become covered call devotees.

Like many of you I had a wonderful Mom who sacrificed to raise my brother and I. When she retired, she had a small pension and modest savings account and Social Security. The sum total of her income sources was barely sufficient to meet her needs. Since managed her money I began writing OTM (out of the money) calls which provided and nice steady income to cover her living expenses. The calls I wrote were largely on Blue Chip Stocks that she was familiar with. Although she did not completely understand the mechanics of covered calls, she liked the extra cash and was so relieved that she came to refer to Covered calls as ” Pennies from Heaven”.

In early 2002, I had discussion with her about the need for long term care Insurance. After many discussions with her about the valid need for Long term care Mom refused to “spend all that money”. Knowing the futility of arguing any further, I just decided I would out flank her. Several weeks later I approached her again. This time I had to lie to her for the first time in my life so that she would agree to have a LTC policy. I explained to her as an executive with my company, that extended family, were eligible for long term care insurance. She said wonderful. Now the premium had to be paid. I submitted the application and for the next 10 years paid premiums annually using covered calls.

One day I received a call from my brother that “mom” had a stroke. I met with her doctor and what he had to say nearly knocked me down. He said “your mother will live maybe for a year. It is imperative to find a facility for her care after she is discharged from the Hospital. It will be expensive; does she have long term care?”

We were fortunate to find a facility very close to my home. My brother and I did an assessment of how much income she had and how much were here LTC and other cost would be. We quickly realized that even with her LTC policy and other sources that there would still be a monthly deficit. Once again, Covered Calls to the rescue. We were able to make sure my mother had the best of care because she had LTC (paid for by C.C.) and were able to easily cover any other expenses with covered calls. We were able to ” Hit a Double” as Alan Ellman would say using covered calls.

My mother passed away one year after her stroke. We were able to preserve all of her cash and brokerage assets because of the cash we generated.

In 2008 the storm clouds began to gather. Market volatility was rising rapidly, well-known companies were declaring bankruptcy and clients were frightened. My staff and I had been writing calls for years for our clients, but with the market dropping precipitously, we made a course correction as our clients continued to have the need for income but were frightened about having money at risk. We met with our clients and explained to them that we would continue writing calls but that we would be altering the covered calls by selling DIMs, Deep in the Money Calls. Their monthly cash flow would continue, and we might be called away more frequently but because were selling deep in the money calls they would be largely protected to the downside and that if necessary we would do this until the market turned.

So, while the market continued to fall, our clients cash flow never faltered and because of using ITM calls they suffered very little reduction to their portfolio values.
Hundreds of our clients had their cash flow intact and we preserved assets due to covered call competence.

Covered call writing has had a profound influence on the quality of my life and that of my family members and Investment clients. It is a strategy geared to the retail Investors and levels ” the playing field” between us and the Institutional investors. My hope is that this article motivates other retail investors to investigate this strategy to determine if it may improve the quality of their lives as it has for me and my family.

For a 10% discount on all store items use promo code: holiday10

GMI: 0/6- Bearish signal since market close of November 13th, 2018 as of Friday morning

BCI: Selling only in-the-money strikes; moving 25% of my stock portfolio net worth into cash. Still confident in the fundamentals of the US economy and plan to put the cash on the sidelines back to work once the selloff subsides. 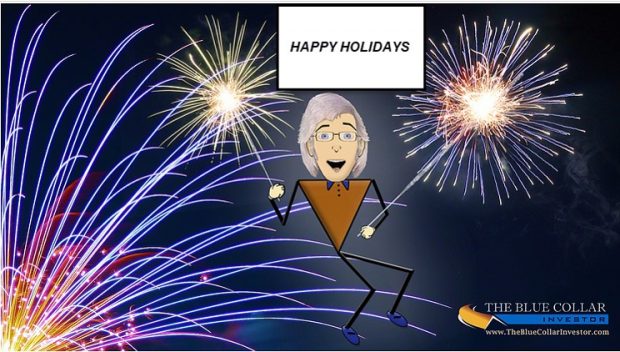 Wishing you a happy, healthy and safe holiday season,

25 Responses to “What Covered Call Writing Has Meant To Me: A Financial Advisor’s Perspective by Guest Author Kevin Crowe”