When And Why Will My In-The-Money Strike Be Exercised?

Covered call writers receive option premiums for undertaking the obligation to sell our shares to the option holder if that holder decides to exercise that right. Understanding when and why exercise will take place is critical to the implementation of appropriate exit strategies and therefore maximizing our option and stock profits.

Let’s first look at our covered call trade from the perspective of the option buyer. As the holder of the call option the buyer’s goal is to make the most money possible. This can be accomplished by exercising the option and buying the stock below market (when the strike price is in-the-money) or by selling the option prior to expiration. If the strike price is in-the-money will the options be exercised early (prior to 4 PM EST on expiration Friday), will they be exercised after expiration Friday or will they never be exercised? To get an understanding of how this works we must first look at the premium of the call option and the equation that defines what the premium consists of:

On August 24th, I published an article on this site showing a trade I made using KORS as my underlying. KORS was purchased for $72.36 and slightly out-of-the-money $72.50 calls were sold. As of September 1st, the share price rose to $74.09, leaving the $72.50 calls now in-the-money. The question now is will early exercise occur and my shares be sold? To get an answer, we look to a current options chain: 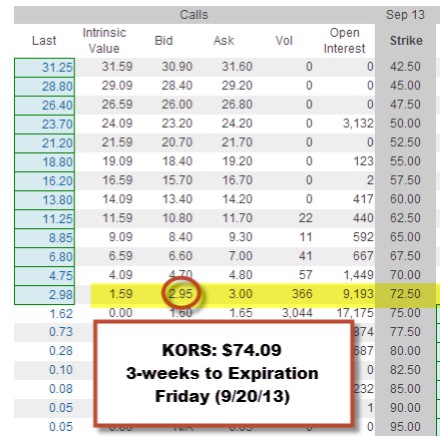 Amount option holder will receive if early exercise is invoked and shares are sold:

Amount option holder will receive if option is sold rather than exercised:

The breakdown of the option premium is as follows:

It is apparent that if the holder chooses the path of early exercise, time value will be lost and that makes no financial sense. Now if there is a dividend distribution prior to expiration Friday in an amount greater than $1.36, early exercise would be much more likely but not guaranteed (many retail investors do not know about dividends and ex-dates).

Are we assured that early exercise will not occur if there is no dividend to consider?

NO. Some investors want to own the stock and will exercise (rarely) even if selling the option will make more sense. We cannot account for other investors making poor financial decisions. These investors should sell the option and then buy the shares at market thereby capturing the time value that early exercise would deprive them of. In these unusual instances, The Options Clearing Corporation (OCC) randomly assigns exercise notices to brokerage firms, which then assigns these notices to their customers (could be you or me!). Our covered call writing decisions should not be based on rare and unusual circumstances but rather on the most likely scenario which is that our in-the-money strikes will not be exercised (barring a dividend issue) prior to 4 PM on expiration Friday. Therefore, if we wanted to hold onto our shares, we would need to buy back or roll the option prior to expiration.

To determine the likelihood of early exercise we need to look at the option premium of an in-the-money strike. Early exercise will result in loss of time value for the option holder and therefore makes no financial sense. Early assignment is possible when there is a dividend distribution or when the holder incorrectly decides to exercise early and the assignment randomly falls to our account.

Philadelphia Chapter of the American Association of Individual Investors

Reservations can be made through Andrew Street at 261 Gypsy Road in King of Prussia, PA 19406

Alan will be one of two speakers at this event.

Skirball Center 9AM to 12PM

As events in Syria and investor fear of the Fed decreasing its expansionary monetary policy, the market remains nervous and unpredictable. This week’s economic reports were a mixed bag but the disappointing jobs report seems to encourage many investors that the current monetary policies will remain in effect at least short-term (bad news viewed as good news…go figure!):

Thanks one and all for your continued support.

9 Responses to “When And Why Will My In-The-Money Strike Be Exercised?”