When Should We Execute Our Option-Selling Trades?

The 3-required skills for covered call writing and selling cash secured puts are stock selection, option selection and position management. We can also add timing of our trades as a secondary factor in enhancing our overall returns. These considerations are different for option-selling compared to traditional buy-and-sell portfolios. This article will highlight how and why to take advantage of the best times to trade to maximize our option-selling profits.

We enter our new positions early in the contract month. This is the Monday or Tuesday after expiration Friday (the 3rd Friday of the month). This is different from the calendar month and is always the month prior to contract expiration. For example, the November 2018 Monthly contracts expired on November 16th. The best time to enter new positions for these contracts were October 22nd or 23rd, the Monday or Tuesday after the October contracts expired. When we sell options, we are selling time value, the component of option premium that consists of implied volatility of the stock and time-to-expiration. If we delay entering our positions, the time decay (Theta) will decrease our initial profits as shown in the screenshot below: 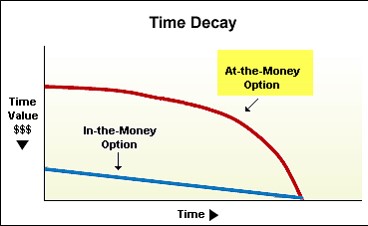 The red line shows how time value is lost later in a 1-month contract for our near-the-money strikes.

Each day, there is frequently early morning and late afternoon volatility. This is related to a reaction to after-hours news, computerized institutional algorithmic trading and day traders closing positions. We want to avoid these hours so that we buy securities and sell options without extreme volatility moving one position from the other. In other words, we want to establish positions with the initial returns based on our option-chain analysis. Therefore, the best hours to establish our initial positions are between 11 AM ET and 3 PM ET.

Exit strategy opportunities can present themselves at any time during an option contract. We must take advantage of these moments as soon as they appear. These trades can be automated. Option positions can be closed (buy-to-sell) by setting limit orders immediately after selling the option using the 20%/10% guidelines. If we sold an option for $2.00, immediately set a limit order to buy-to-close at $0.40 (20%) or less. Change the limit order to $0.20 (10%) mid-contract. If the thresholds are met, the trades will be executed automatically even when we are not in front of our computers. At that point with the short calls closed, we can make decisions pertaining to our next steps as detailed in my books and DVD programs.

***The above bullets are useful for “stock-only” portfolios and are not to be used for our option-selling strategies.

Our option-selling trades are best entered between the hours of 11 AM ET and 3 PM ET early in the Monthly contract. Exit strategies should be implemented whenever those opportunities arise and a good deal of position management can be automated by entering limit orders after initial trade execution has been established.

Over the years, the BCI community has been incredibly gracious by sending our BCI team email testimonials sharing stories as to what our educational content has meant to their families. Moving forward, we have decided to share some of these testimonials in our blog articles. We will never use a last name unless given permission:

The BCI methodology is the simplest, most conservative and, with research provided, the most cost-effective way to “beat” the market. And you will.

Thank you, Barry, your team and all the members who make this community the overwhelming value that it is.

Alan will be hosting a free webinar for the Options Industry Council (OIC) on generating income from selling options. Click here to register for free.

All Stars of Options

How to Select the Best Options in Bull and Bear Markets

This is a paid event hosted by The Money Show

21 Responses to “When Should We Execute Our Option-Selling Trades?”

← Should We Add a Short Put to Our Collar Trades?
Analyzing a Rolling Down Trade During an Extreme Short-Term Market Decline →