Covered call writing exit strategies include scenarios when share price moves up or down. Our main enemy is share depreciation where we need to mitigate losses but we must also have the ability to enhance returns when share price rises under certain specific conditions. This article will evaluate a trade sent to us by Mario G on a stock (THO) that moved from $100.00 to $108.64 per share mid-contract. With two weeks remaining until contract expiration, we must evaluate the opportunity to use the mid-contract unwind exit strategy to generate a second income stream in the same month with the same cash.

Mario astutely noted that THO had a projected earnings report date of 3/6/2017 and therefore would not be including this security in his portfolio for the March contracts.

Since an at-the-money strikes was initially sold, there is no opportunity to generate additional profit from share appreciation. Mario has maximized his 3%, 1-month return and THO can drop in price by 8% and that 3% will still be realized…a nice position to be in. However, as Blue Collar Investors, we dig deeper. What will be our actual time value cost-to-close and can we generate a greater return than that cost-to-close in a completely new position in the two weeks remaining in the contract? For premium members who have access to the Elite version of the Ellman Calculator (also available in the Blue Collar store for non-members), the “Unwind Now” tab can be used for this calculation. If the cost-to-close is such that we can generate a return of at least 1% greater than to actual cost to close, it is worth closing. Some investors may set a higher or lower parameter but that is mine. For example, if the cost to close is 0.5% and we can generate a 1.5% initial profit in a new position, it is worth considering. 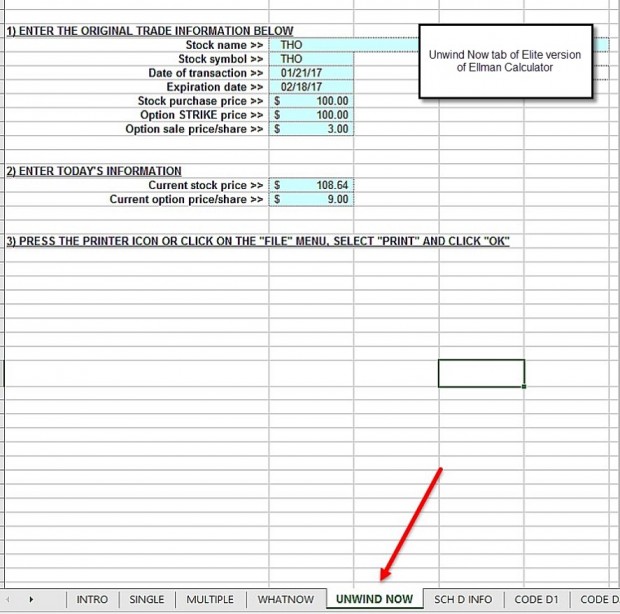 THO: Input into the “Unwind Now’ tab of the Ellman Calculator 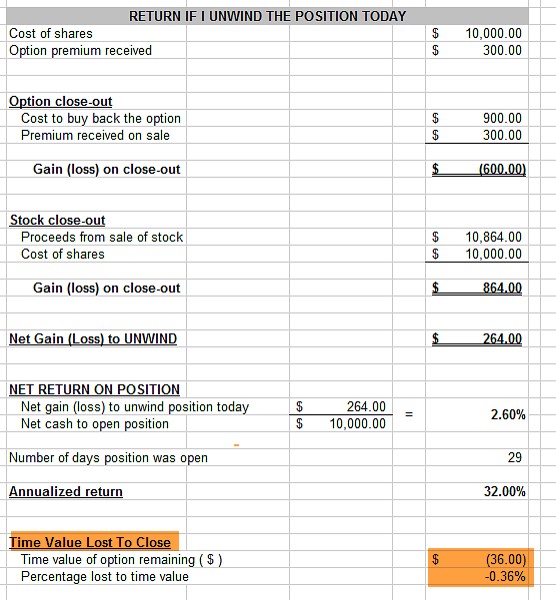 THO: Calculation Results from the “Unwind Now’ tab of the Ellman Calculator

This demonstrates that the time value cost-to-close is $0.36 0r 0.36% My threshold would be 1.36% or higher for initial time value return on a new position or I would allow assignment and congratulate myself on an outstanding trade.

When strikes move deep in-the-money, our maximum returns are close to ensured if no action is taken. Consideration should be given to closing the position in its entirety mid-contract (mid-contract unwind exit strategy) if the time value cost-to-close is near zero and a new position will generate a return at least 1% higher than that cost-to-close.

Thanks to Mario for inspiring this article.

For more information on the mid-contract unwind exit strategy:

(Hard cover versions also available only on this website).

Global stocks moved slightly higher this week along with continued strength in US markets as another impressive earnings season passes. The Dow surpassed the 22,000 level during the week, supported by positive economic data. West Texas Intermediate crude oil prices ended the week near $49, down slightly from last week’s $49.65. Volatility, as measured by the Chicago Board Options Exchange Volatility Index (VIX), declined to 10.03 from 11.0 a week ago. This week’s economic and international news of importance:

BCI: I am currently favoring out-of-the-money strikes 3-to-2.

58 Responses to “When Strikes Move Deep In-The-Money: A Real-Life Trade”