When we sell an in-the-money covered call, we are taking a defensive posture and using the intrinsic value component of the premium to protect the time value initial profit. As an example, let’s look at New Oriental Education (NYSE: EDU) on April 7, 2017:

The results show an initial time value profit of 3.4% (brown field) with a downside protection of that profit of 2.4% (yellow field). This means that EDU can drop up to 2.4% by expiration and a 3.4%, 6-week return will have been realized. From an option-seller’s perspective, in-the-money strikes offer an alternative that can be employed when markets are bearish or volatile, when chart technicals are mixed or when the option-seller has a low risk tolerance.

This begs the question then as to why option-buyers are willing to spend the additional cash to own these strikes. After all, we are getting an insurance policy protecting our time value and that protection is paid for by the option-buyers, not us.

Reasons why in-the-money strikes are purchased 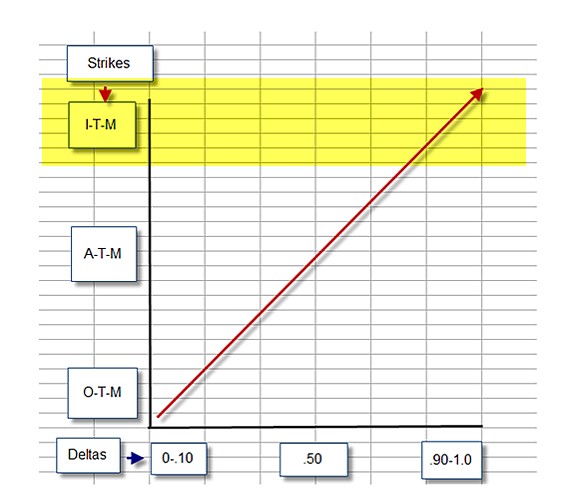 ITM Strikes have the Highest Deltas

A Delta approaching “1” means that the options will change in value nearly dollar-for-dollar with the underlying security. If the option holder is anticipating a significant share appreciation by contract expiration, it could result in an impressive percentage return because of the much lower cost basis of the option compared to the underlying asset.

Frequently money managers will seek a Delta-neutral portfolio to mitigate against market risk. This where positive and negative Deltas neutralize each other. For example, if stocks were shorted resulting in negative Deltas, buying ITM options to mitigate with positive Deltas may be appropriate.

The moneyness of an option changes based on the price of the underlying security. If an option buyer purchased a $50.00 call when share price was $48.00, that option was out-of-the-money at time of trade execution. If shared price then moved to $52.00, that same strike is now in-the-money. The Options Clearing Corporation matches up buyers and sellers of options and those trade executions were probably not executed at the same time.

Global stocks were flat for the week. An increase in volatility was a result of concerns that White House turmoil could impact President Trump’s pro-growth agenda. Adding to volatility was a terrorist attack in Barcelona that killed 14. These events moved the Chicago Board Options Exchange Volatility Index (VIX) back up to 14.26. The price of West Texas Intermediate Crude oil dropped to $47.20 a barrel from $48.20 last week. This week’s economic and international news of importance:

BCI: I am currently favoring in-the-money strikes 2-to-1. The stock market has been incredibly resilient given the global and domestic political concerns. It is not clear how much longer this durability will last.

Click here to cancel reply.
← Determining the Delta of our Strikes Using the Airport Formula
Naked Options versus Covered Options: Where Should We Take a Stand? →