Selling options (covered call writing and selling cash-secured puts) will result in a positive outcome in the first four of the following five scenarios:

Although it is important to enhance gains in the first four situations, it is critical we learn how to mitigate losses when the stock price is declining significantly. Because the BCI approach to selling calls is slightly different than how we approach puts, the 3% guideline will have application for put-selling only. Let’s first define the 3% guideline for put-selling:

If share price drops below the out-of-the-money put strike (lower than current market value) we sold and the stock is under-performing the overall market, we buy back that put option.

This is a defensive maneuver used to avoid catastrophic losses. Generally, closing this put position will result in a net debit because put value increases as share price decreases. Our goal is to keep loses small and then use the cash now freed up to secure another put position with a different underlying security.

Example of the 3% guideline for put-selling

Reasons why the 3% guideline is an asset when selling puts

In the BCI methodology, we select mainly out-of-the-money puts to generate monthly cash flow. The reason we sell puts is to avoid taking possession of the stock. If we sold near-the-money or in-the-money put strikes, the chances of exercise are much greater defeating the purpose of favoring puts over calls. There are exceptions to this rule. For example, when puts are sold in lieu of setting limit orders to buy a stock at a discount, near-the-money or in-the-money strikes are given more consideration.

Also, if we set goals for initial profit to be in the 2-4% range, targeting a 3% below strike price is reasonable to avoid catastrophic losses. It is true we usually will incur a net debit after closing the short put, but it will be a manageable loss. 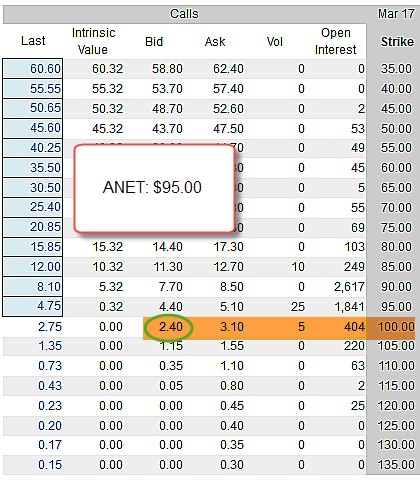 The 3% guideline has near universal application when selling puts but not when writing covered calls. The reasons relate to strike price selection differences, willingness to own the underlying security and strategy goals.

***For detailed information on mastering all three aspects of put-selling and covered call writing check out our books and DVD programs in our BCI store.

Global stocks moved up impressively this week. The price of West Texas Intermediate crude oil moved up to $46.35 a barrel from $44.50 a week ago. Volatility, as measured by the Chicago Board Options Exchange Volatility Index (VIX), dropped to 9.51 from 11.75 last week. This week’s economic and international news of importance:

BCI: I am fully invested in the stock portion of my portfolio currently holding an equal number of in-the-money and out-of-the-money strikes. Leaning to moving to a more bullish position when the August contracts begin.