Locating Stocks During the Heart of Earnings Season

Never write a covered call or sell a cash-secured put when there is an upcoming earnings report prior to contract expiration. This is one of the most important rules in the BCI methodology. Adhering to this guideline can create challenges during the heart of earnings season when most companies publicize their financial statements. In our BCI community, when difficulties present themselves our response is “bring it on” With earnings season now upon us, we will use this week’s article to demonstrate how to use our premium member reports to circumnavigate earnings reports challenges. I am writing this article prior to production of the reports published at the end of the October contracts. I strongly urge our members to use the reports dated 10/19 and 10/21 for ETF and stock selections for the November contracts.

Stocks that reported during the October contracts will be eligible for the November contracts. These stocks are highlighted in gold in the previous week’s report:

The red arrow points to one of the five candidates with inadequate option open interest so there are four candidates eligible for the November contracts in this area. We also find two more stocks that report in the December and January contracts as we scroll down the report:

Stocks Reporting After the November Contracts

In addition to the six eligible candidates located so far, many of the stocks that report during the November contracts have Weekly options associated with them. This means that we can use the securities in the three of the four contract weeks. Granted we will lose some premium income but it will be worth it to avoid earnings report risk. The screenshot below shows some of these potential candidates with Weekly options: 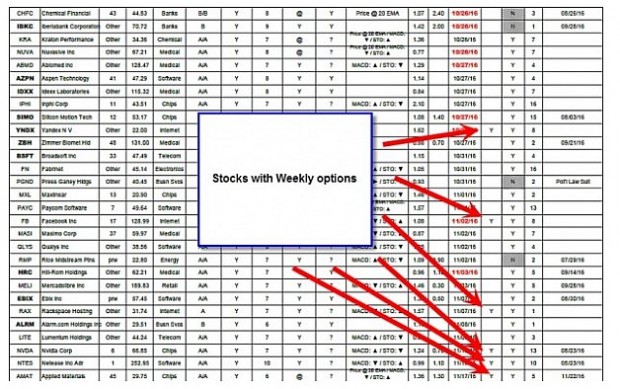 Exchange-traded funds (ETFs) do not represent earnings report risk since they are baskets of securities with some reporting favorably and others unfavorably and they tend to balance themselves out. Each report normally produces between 20 -25 eligible candidates to select from: 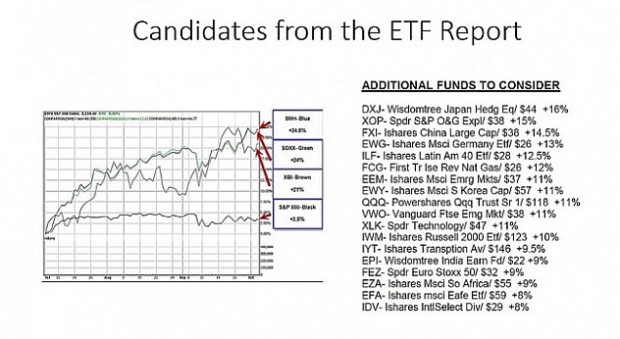 It is critical to avoid the risk of an earnings report disappointment. Since most securities report during earnings season (January, April, July and October) there are apparent challenges funding our option-selling portfolios four months per calendar year. We overcome these challenges by using stocks that report in other contract months, by using stocks with Weekly options and by incorporating ETFs into our portfolios those months.

Global dropped slightly this week, weighed down by a firmer US dollar and rising long-term interest rates amid concerns over the Chinese economy. Volatility, as measured by the Chicago Board Options Exchange Volatility Index (VIX), rose to 16.12 this week from 13.4 a week ago. Oil prices held steady above $50 per barrel. This week’s reports and international news of importance:

BCI: My positions for the October contracts continue to favor in-the-money strikes 2-to-1. I’m leaning slightly defensive because of the upcoming election and Fed watch.

The charts point to a neutral to slightly bearish outlook. In the past six months the S&P 500 rose by 4% while the VIX rose by 17%.

22 Responses to “Locating Stocks During the Heart of Earnings Season”

Click here to cancel reply.
← Will My Broker Automatically Exercise Options That Expire In-The-Money?
Leveraged ETFs and Margin Accounts for High-Risk Traders Only →