Sophia Loren once said, “It’s better to explore life and make mistakes than to play it safe. Mistakes are part of the dues one pays for a full life.”  I presume she was speaking about love and romance rather than options trading, but her advice is sage in both situations.

I follow Loren’s advice in my options trading.  I like to explore new strategies and understand that I can’t always play it 100% safe otherwise I might miss out on ways to make higher returns.   And yes – I do make mistakes.  Luckily, there are several rules when trading covered calls that can reduce the number of mistakes one makes.  Although women tend to make the same mistakes over and over again in relationships (at least that’s what the ladies’ magazines will tell you), in options trading making a mistake can be a valuable lesson which will make you a more successful and profitable trader.  And you don’t have to fall in the trap of making the same mistake twice.

The members-only area of The Blue Collar Investor (BCI) website contains a list of the ten most common mistakes of covered call writers.  I’m here to tell you that even experienced covered call writers make mistakes from time-to-time.   The mistake I made three months ago?  I wrote a covered call during a contract period where there was an upcoming earnings report.

I had made a nice credit early in the year selling a call spread (buying and selling call options on the same stock with the same expiration but different strikes) as Netflix’ s (NFLX) share price was declining.  In late June, NFLX made a reversal and what appeared to be an uptrend began.  After looking at the chart and discovering that calls were selling at a juicy premium, I decided to write an at-the-money covered call on July 5.  I bought 200 shares of NFLX at $77.77 per share for a $15,554 debit and simultaneously sold two Aug 18 $77.75 calls for a $1,436 credit.  (Had I bothered to check that July 24 was the earnings date, I would have understood why the call premium was so high.)  Below is chart and as they say “a picture is worth 1000 words” 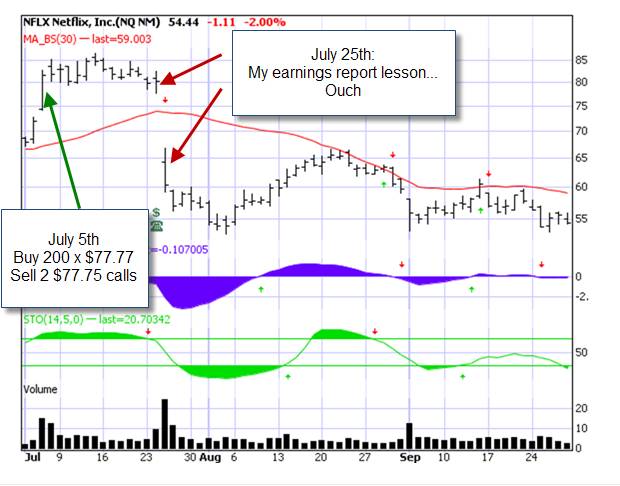 NFLX gaps down after an earnings report

As you can see from the chart, on July 25 NFLX’s stock price plunged, and then continued to decline.  Unfortunately, the stock has continued to stay mostly range-bound (near $55 a share at the time I wrote this article), well below the $77.77 I paid for the shares!  In the case where the stock price plummets like this, even BCI’s recommended exit strategies for how to manage the call position will not take the painful sting out of this insect bite!   There is a silver lining to this story, however.  I took a relatively inexpensive kick in the gut which will remind me not to ever make this mistake again. 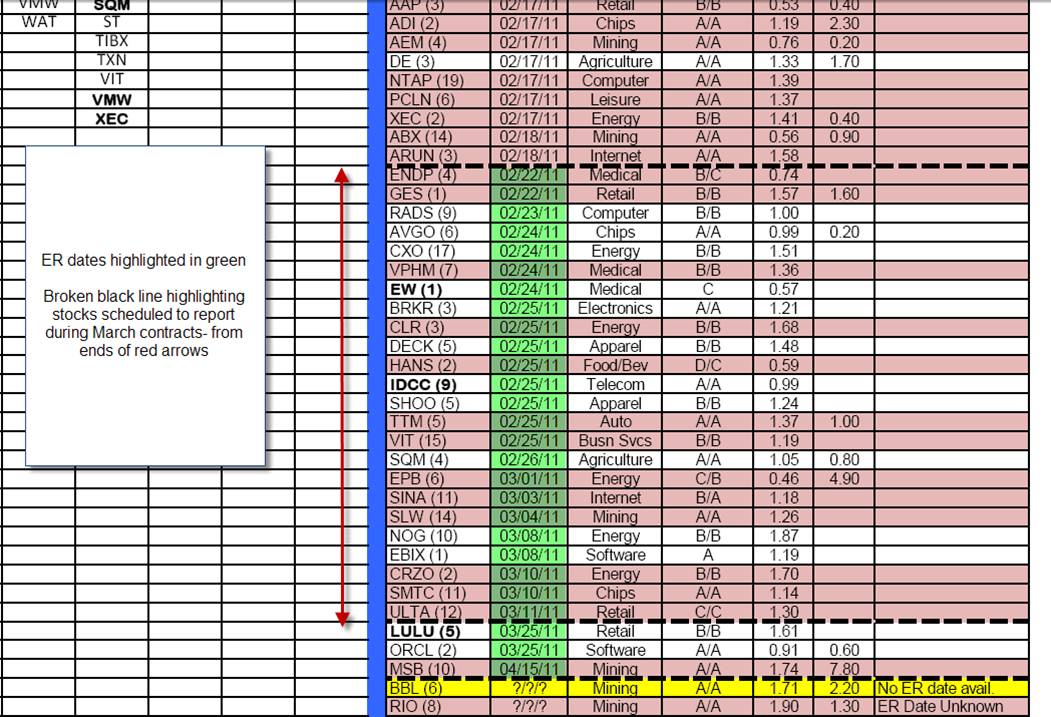 However, once you are in a position, before you roll the call into the following month, you must remember to check when the next earnings announcement is and consider closing your position.  And if you do make a mistake, remember what Loren said.

(Laurie has agreed to write periodic articles on our BCI site about covered call writing from a woman’s perspective. We welcome Laurie to the BCI community-Alan)

Chart of the week:

In our BCI methodology we have a strict series of fundamental, technical and common sense screens (one of which is avoiding earnings reports that Laurie alluded to above).  Below is a chart for AMGN, a stock currently on our premium running list, which depicts the bullish signals we look for when evaluating covered call candidates: 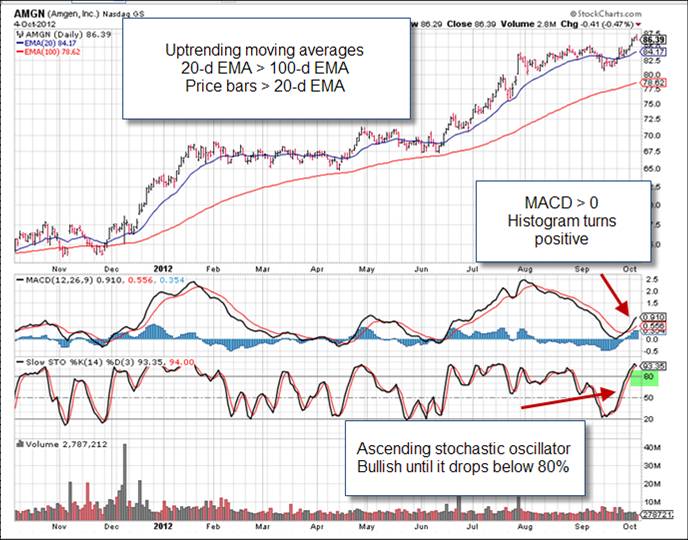 Premium members will note that our running list shows the following for AMGN:

Once a stock meets our fundamental, technical and common sense screens, we check the calculations to see if it meets our financial goals.

This week’s economic reports leaned to the positive:

BCI: My personal concern of a weaker earnings season tempers my short-term outlook to cautiously bullish, laddering ITM and OTM strikes about 50/50.

My best to one and all,