What is “Left Tail Risk” and How is it Impacting our Stock Portfolios?

What’s going on here? Stock prices are historically inexpensive. Bond yields need a magnifying glass to detect. Earnings reports have been positively surprising for eleven consecutive quarters. There are trillions of institutional and retail investor dollars sitting on the sidelines waiting to propel the market directly to the moon. So why is the market trending sideways?

Global concerns are anticipating the possibility of what the Wall Street insiders call left tail risk. To explain this phenomenon we must also look at how financial planners and institutional traders model their portfolios.

Many financial planners will set up the investment portfolios for their clients based on the Modern Portfolio Theory (MPT). I discuss this in detail on pages 93 – 96 of my latest book. MPT is a portfolio optimization methodology which attempts to maximize our portfolio expected returns for a given amount of portfolio risk, or stated differently, minimize risk for a given level of expected return by selectively choosing the proportions of various assets.

Risk is defined as the standard deviation of return which sheds light on the historical returns of the various assets. It shows how much variation or dispersion there is from the average. A low standard deviation indicates that the data points tend to be very close to the average or mean, whereas high standard deviation indicates that the data points are spread out over a large range of values. There is more risk in the latter. This is reflected in our option premiums as well in that the more risk in the underlying, the greater the premium returns. 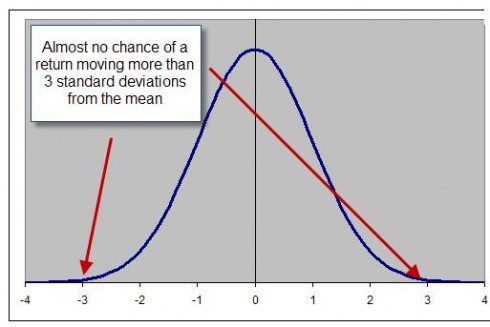 This concept of portfolio development and our financial results can be impacted by the phenomenon known as tail risk. This occurs when the portfolio value can move more than 3 standard deviations from the mean. These events are usually triggered by a severe economic or financial crisis that seems to erupt unexpectedly. They tend to spread panic across markets, creating a downward spiral of declines affecting a broad spectrum of investments. Because they are so widespread and their magnitude so difficult to predict, left tail events (negatively impact our portfolios) can have a devastating result on portfolio returns. When tail risk rears its ugly head the distribution is not normal, but skewed, and has fatter tails. The fatter tails increase the probability that an investment will move beyond three standard deviations and create more risk which, when it is to the downside, is referred to as left tail risk. The chart below compares a normal standard deviation bell curve and a curve with tail risk: 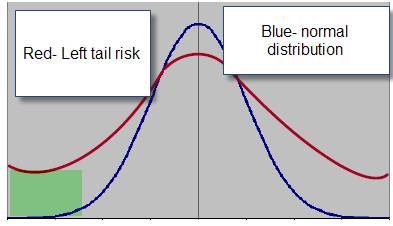 The green shaded area between the red and blue lines reflects the area of left tail risk or the greater chance of a negative movement past 3 standard deviations. If the red line results in a positive result past 3 standard deviations (right side of the graph) it is referred to as right tail risk. Left tail risk is inhibiting institutional investors from moving all that cash into the market. As a result, liquidity is depressed, bid-ask spreads are wider and favorable trade executions for the “big boys” becomes more difficult and the process snowballs.

Examples of market shocks that resulted in left tail risk: 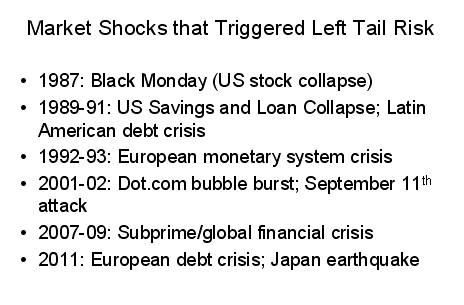 The prospect of left tail risk is impacting our current stock investments as institutional investors cannot depend on normal distribution models for their investments. This is keeping trillions of investment dollars on the sidelines and creating unusual market volatility which is no friend of conservative covered call writers. Blue Collar Investors can elect to stay on the sidelines or take defensive actions such as writing in-the-money strikes, buying puts or selling cash-secured puts  (premium members see the emergency management report in the “resources/downloads” section of the premium site). Having an understanding of concerns of institutional investors and the models they use for their investments decisions will make us all better and more educated investors.

Issues in Greece and a weak jobs report low-lighted a week of mixed but not so hot economic reports:

The S&P 500 remained above its recent trading range having bounced off support two times: 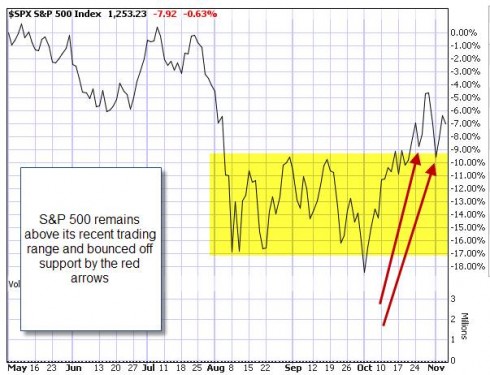 The VIX moved up from 25 to 30 barely staying within our comfort level:

Posted on November 5, 2011 by Alan Ellman in Investment Basics

51 Responses to “What is “Left Tail Risk” and How is it Impacting our Stock Portfolios?”

Click here to cancel reply.
← Investor Psychology and the Need for Structured Plans
Rolling Strategies On Or Near Expiration Friday →