Why Use Technical Analysis: An Example Of A Complete Technical Breakdown

Technical analysis or fundamental analysis…which should we use in the stock selection process for covered call writing? Many sophisticated investors can make an impressive argument for one or the other. I say why not use both? As most of you know, in the BCI methodology we use actually three types of screens: fundamental analysis, technical analysis and common sense principles (like avoiding earnings reports). Most would agree that institutional investors (mutual funds, hedge funds, banks and insurance companies) have a major impact on the price of our shares. These players love companies that produce strong earnings and revenues. They scrutinize the 3 major financial statements of these corporations before delving in. In my view, since fundamentals are important to these impact players, it should also be important to us. So our first series of screens are fundamental in nature. Common sense principles are just as critical as the other two screens and are detailed in my books and DVDs  and perhaps will be  the subject of a future blog article.

That leaves technical analysis, the subject of this week’s article. If a company is fundamentally sound, why bother? The reason has to do with the myriad of other factors that can impact share price in between financial statement reporting. Global issues, political factors, economic reports and corporate news to name a few. Technical analysis will alert us to changes in market analysis of a particular equity. A company can be fundamentally sound but technically collapsing.

Enter Sodastream International Ltd. – Ordinary Shares (NASDAQ: SODA). This company was previously on the Blue Collar Premium Watch List and once responsible for some pretty terrific returns for many of us. At the end of June, SODA was removed from our “running list” because of a complete technical breakdown. It wasn’t fundamental-related because the earnings report is not due out until July 31st. It appears that the collapse and subsequent share depreciation was related to corporate news and perhaps some market psychology (fear based on rumors). There was an analyst downgrade and rumors regarding a potential acquisition by Coca Cola. Remember, the fundamentals of this company are still strong. Let’s look at the technical chart using the parameters detailed in my books and DVDs: 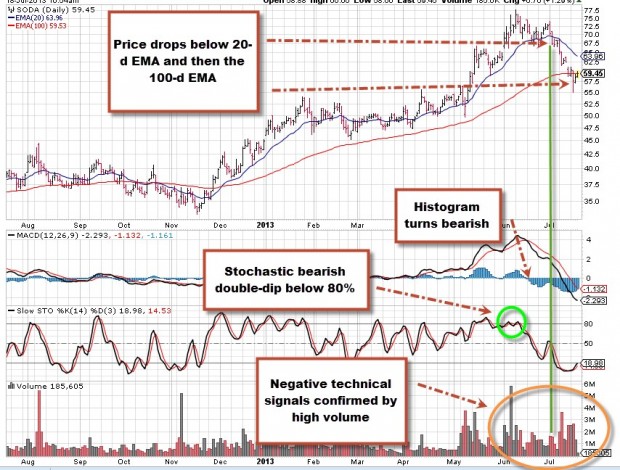 How do we manage a covered call position when there is a complete technical breakdown?

The first step to take is to follow the 20/10% guideline as set up in the BCI methodology. Curling up into the fetal position and feeling sorry for ourselves is not one of our choices! Following this guideline is easy and automatic. Next we research the cause of the collapse. An excellent site I use for researching stock news is:

Most of the time, when there is a total technical breakdown we are going to close our entire position…buy back the short option and sell the long stock. Then immediately put this cash to work in a completely new covered call position. I call this “converting dead money to cash profits”

What if the collapse was due to a market over-reaction?

We must still take action to protect our hard-earned money. They say, “You can’t fight city hall” Once again, we buy back the option and, at least, roll down to generate some additional downside protection of our investment. If the price continues to decline, sell the stock or roll down again but don’t freeze and take no action. A complete technical breakdown in conjunction with negative news is too serious a circumstance for us to freeze and take no action. We all work very hard for our money and should protect it in every way possible.

Technical analysis and the Premium Report:

A stock that is experiencing a complete technical breakdown will be removed from the Premium “running list” as was SODA. The BCI team does a complete technical analysis on all covered call candidates after 4PM EST on Friday and the report shows those stocks that passed all technical screens and those with “mixed technicals” as shown in the screenshot below: 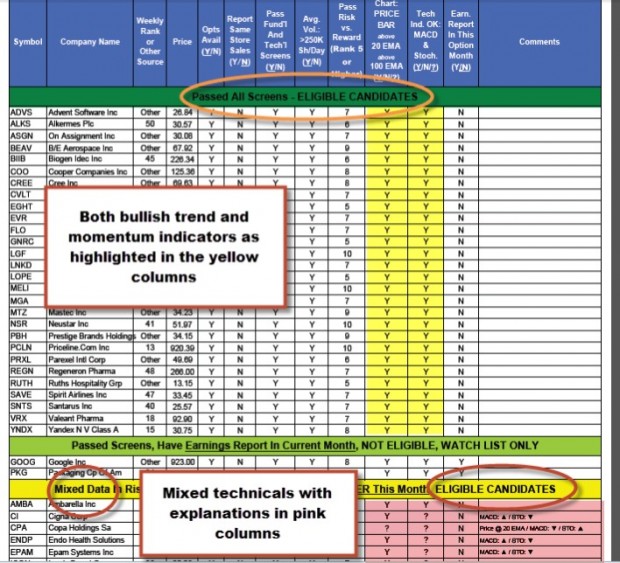 A complete technical breakdown, especially in conjunction with negative corporate news, is a serious matter that requires us to be proactive in our position management. At the very least, rolling down with share depreciation is required. Most of the time unwinding the entire position and using the cash to establish a new position is most appropriate.

There were two major headlines this week. First, Fed Chairman Ben Bernanke told the House Financial Services Committee that he will consider slowing QE (bond buying) only when economic conditions justify. He does not foresee this happening in the near future. The other event was the Chapter 9 bankruptcy filing by Detroit. The reports show a sluggishly improving economy:

Thank you for your continued support.

14 Responses to “Why Use Technical Analysis: An Example Of A Complete Technical Breakdown”