Stocks eligible for our covered call writing and put-selling portfolios are screened in a 3-pronged approach: fundamental analysis, technical analysis and “common sense principles” like avoiding earnings reports. One of the categories under the common sense umbrella is “banned stocks” due to monthly same store retail sales. This list, once 80-long, is now down to 8 companies as the others opted out of reporting on a monthly basis and reverted to quarterly reporting. Monthly reports like these create the same type of risk as do earnings reports. If they disappoint, share value can take a major hit and wipe out our profits for the month.

Recently, one of our members, Ryszard from  Tempe, Arizona, was kind enough to share with me that airlines have analogous monthly reports that can create a high level of risk. These reports are known as capacity reports and are published in the first or second week of every month depending on the airline. Airlines report ASM or available seat miles as their maximum capacity and then these monthly capacity reports reflect the actual percentage of ASM used. Like earnings and revenues, analysts make predictions of these reports and if they disappoint, we can get hurt. I back-checked and found that disappointing capacity reports occur frequently enough where I felt the protection of banning these stocks was justified. Here is the updated list of “banned stocks” 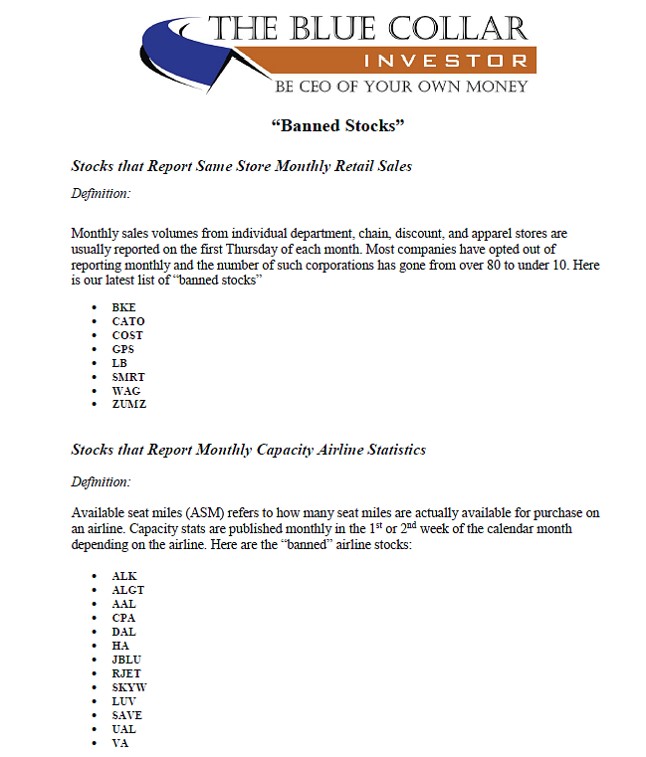 For our premium members, these stocks are automatically screened out and will never appear in our watch (running) list. To those of you screening the stocks yourself, print out the list and keep in by your computer for reference. We will continue to update all our members should we locate additional securities that may not fit our risk profiles. Thanks again to Ryszard for sharing this information.

I’ve been invited to speak at the AAII Investor Conference at Bally’s Hotel Las Vegas, Nevada. This is the American Association of Individual Investor’s national meeting and my presentation is scheduled for Sunday November 8th @ 4PM.

First register for free with the Money Show (click above link)

This week’s reports were again mixed but still supporting an expanding economy:
For the week, the S&P 500 fell by 1.6% for a year-to-date return of 1%, including dividends.

BCI: Cautiously bullish using an equal number of in-the-money and out-of-the-money strikes. A great jobs report on Friday made investors nervous that the Fed may raise interest rates sooner rather than later.