Beta: Another Tool to Enhance our Covered Call Returns

When we defined the Greeks in a previous article concerning investment basics, it included a discussion of the price sensitivity of the option premium as it relates to the underlying equity, time and other factors. One of the rules was that (all other factors being equal) an increase in share volatility will increase an option premium. An equity with greater volatility will be associated with an option premium which generates greater profit but is also associated with higher risk.

One way to measure the volatility or systemic risk (market risk) of a security is to compare it to the market as a whole; the S&P 500 being the most commonly used benchmark. This is known as beta. Beta stats are calculated using a process known as regression analysis wherein the “market” is assigned a number of “1″. Beta is the tendency of a stock’s returns to respond to changes in the market.

If a stock has a beta of 1.5, it is considered 50% more volatile than the S&P 500. If the market appreciates by 8%, the expected return of that equity, based on its beta, would be 12%. On the other hand, if the market declines by 8%, that equity would be expected to decline by 12%. There you have the two faces of enhanced volatility…greater potential returns with enhanced risk. If an equity had a beta of .5 and the market was up 8%, one would expect that security to appreciate by 4%.

There is no such thing as a panacea in the stock market. This ratio does have its flaws and should not be relied upon solely in determining the risk of our investments. Here are the drawbacks:

The drawbacks are more significant for longer term investments. Beta can be extremely useful to us as 1-month covered call investors. For our purposes of selling 1-month call options, beta is a good measure of risk.

Implementing beta into our decision-making process:

Premium members can access beta information directly from the running list on pages 3 and 4 of the Weekly Premium Report as seen on the graphic below: 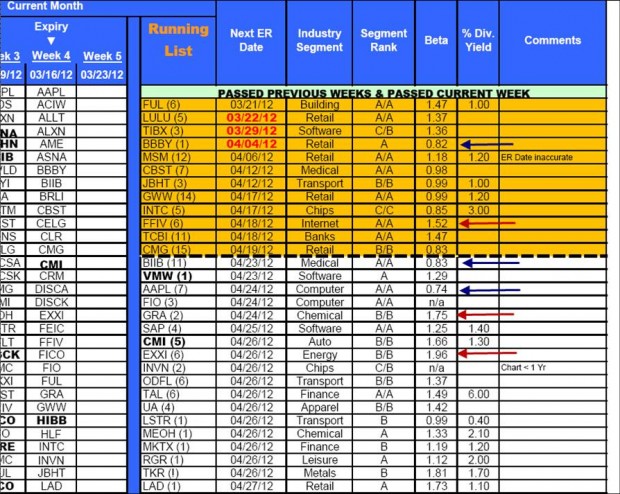 Beta stats from the Premium Report

Beta and the Premium Report

Note the relatively high beta stocks indicated by the red arrows and the relatively low beta equities highlighted by the blue arrows. Depending on your overall market assessment, this information can help determine your stock and strike selection. General members can access beta information from several free sites such as:

Beta is simply one tool in our arsenal. Market conditions will dictate whether we should lean towards high or low beta stocks. It should be used in conjunction with all our system criteria. No one factor will make our investment decision evident. By continually throwing the odds in our favor using sound fundamental and technical analysis along with common sense, we will watch our profits rise and our successes dominate our portfolios.

Summary:
IBD (Thursday): Market in correction
BCI: This site remains bullish but due to a gap-up in the VIX which has since subsided and global concerns we will now lean to a position of favoring ITM strikes.
My best to all,
Alan ([email protected])
www.thebluecollarinvestor.com

Posted on April 14, 2012 by Alan Ellman in Investment Basics

18 Responses to “Beta: Another Tool to Enhance our Covered Call Returns”