When selecting stocks and options for covered call writing and put-selling we factor in volatility, both implied and historical. Historical Volatility (HV) is the actual volatility of a security over a given time period. HV is calculated by determining the average deviation from the average price based on one standard deviation (expected to be accurate 67% of the time).  Implied volatility (IV) is a market forecast of the underlying stock’s volatility (in either direction) as implied by the option’s prices. It is also usually based on one standard deviation and a one-year time frame.

How volatility is factored into our option-selling decisions

IV is a critical factor in determining the amount of premium we receive when we sell an option. In essence, we are selling volatility. The higher the IV, the greater the premium but the more risk we are subjected to. Changes in IV are measured by the Greek Vega. It is defined as the amount an option price is expected to change for every 1% change in volatility. We can quantify the amount of volatility risk we are incurring by setting a goal for our one-month (feel free to change the time frame) contracts. I use 2% – 4% as a guideline for near-the-money one-month strikes. This will restrict the amount of volatility risk I am incurring. In bull market environments, I will raise that goal level a bit and in bear markets I may lower the parameters.

We factor in historical volatility through the eyes of beta. This is a measure of market risk or volatility compared to the market as a whole. It is usually compared to the S&P 500 over a one-year time frame (this is what BCI uses) but the benchmark and time frame will vary from vendor to vendor. Beta stats are highlighted in our Weekly Premium Member reports as shown in the screenshot below: 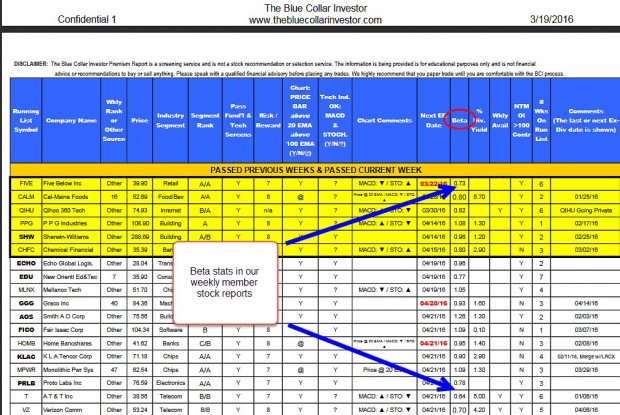 Which is more significant to option-sellers…IV or HV?

Over the years, I have stressed that IV is a primary factor and HV is a secondary factor in our option-selling decisions. We are incurring short-term obligations and need as much feedback regarding near-term price movement as possible. If there are market forces or events that will be impacting our underlying’s price movement, we need to know that information. It is more essential to have that data than the projected price movement over a much longer time frame. Stated differently, the future is more significant than the past although I have no issue with viewing historical data as well.

IV and HV during earnings season

To make this point, let’s view a comparison chart taken from iVolatility.com for Apple Computer (AAPL). The chart covers the following earnings reports:

Notice that during earnings season (pink fields) there are large discrepancies in IV and HV. Now this is no shock to us as we would expect volatility to increase as investors await a positive or negative report. However, it does point out that if there is an event on the horizon that may impact our share price, it will influence our investment decisions and therefore represents data we want to have at our disposal. IV is much more likely to supply that information than is HV.

One of our BCI mission statements is to have a system that enhances returns to the highest possible levels and reduces risk while simultaneously remaining user friendly and time efficient. This includes prioritizing the parameters we include in our screening process. This article is intended to make a case that implied volatility should be stressed more than historical volatility as they relate to short-term option-selling.

Global stocks declined this week as five members of the US Federal Reserve’s rate-setting committee suggested that a rate hike could come as early as April while Federal funds futures are pricing in a rate hike in late 2016 to early 2017. The Chicago Board Options Exchange Volatility Index (VIX) moved up to 16.15 from 14.74 last week. This week’s reports and international news of interest:

WHAT THE BROAD MARKET INDICATORS (S&P 500 AND VIX) ARE TELLING US
The S&P 500 is currently in an uptrend (higher highs and higher lows) while the VIX (CBOE Volatility Index) is at 14.74.
The near term market trend is BULLISH