When studying our option trading basics, we learn that most stock options have four expiration cycles. Some securities also have long-term options (LEAPS) as well as weekly and quarterly expirations. Some of our members have noticed that there are certain actively-traded securities that have additional expiration months in addition to the ones we are already familiar with. This is a result of  the Additional Expiration Months Pilot Program.

On November 1, 2010, after receiving SEC approval, the International Securities Exchange introduced additional expiration months on 20 actively-traded option classes on a pilot basis. These securities have a total of six different expiration months aside from any LEAPS series. The result will be that a selected issue will always have four consecutive near-term months as well as two more based on its expiration cycle. For example, after a November expiration, a stock on the January cycle (1st month of each quarter) would typically have expiration months available for December, January (the two near-term months); April and July (the two more from the January cycle). As a result of the Pilot Program, February and March expirations are added.

Once the December contracts expire, the October series is added as part of the January cycle (1st month in the 4th quarter) and so the available expirations would look like this (four consecutive + two more):

Below are the 20 classes selected for the pilot along with the expiration month(s) that will be added.

Now when Blue Collar Investors view an options chain and see 6 expiration months instead of 4, we know it was selected for the Additional Expiration Months Pilot Program. In October of 2011, this pilot program was retired. I spoke with Market Data Control at the ISE and was informed that even though the pilot program has been retired the ISE still generates the additional expiration months for the original list of twenty. They do not anticipate this list to expand.
***Premium members: This list is archived in the “resources/downloads” section of your premium site.
Upcoming live events:
Saturday April 14th: Atlanta, Georgia
Tuesday May 8th: Long Island, New York
Details to follow.
Market tone:
Our economy continues to recover as reflected in this week’s economic reports and news:

In the past six months the market has been trending up and the VIX or volatility index has been reflecting investor confidence. The chart below clearly reflects both technical positives for our stock market: 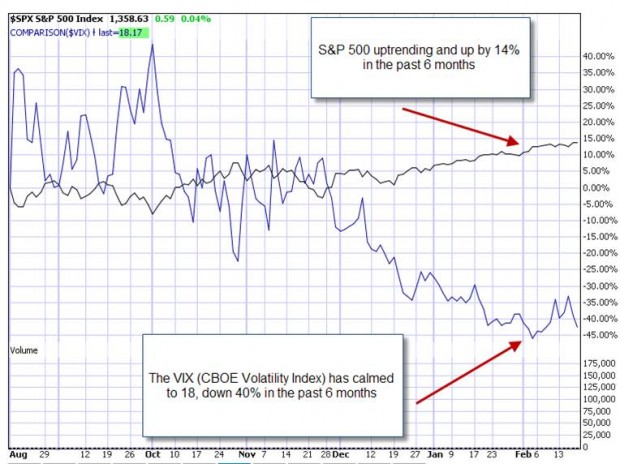 Posted on February 18, 2012 by Alan Ellman in Option Trading Basics