Wait a minute! What if I buy a call option instead of the stock and then sell a call option on that option? I’ll be spending less money than outright purchase of the equity and still generate cash from the sale of the call option! This idea has come to many of you and as a result of your inquiries, this article had to be written. Although not a true covered call write, purchasing a long-term option (more than one year out), called  LEAPS, and then selling call options against that position, is an alternate strategy similar to CC writing. Technically, these trades are known as calendar spreads so perhaps we should start off with some definitions:

LEAPS– Long-Term Equity Anticipation Securities. These are option contracts with expiration dates longer than one year. Not all stocks and ETFs have these type of options associated with them.

Calendar Spread–  Simultaneously establishing  long and short options positions on the same underlying stock with different expiration dates. For example, you buy the December, 2010 $20 call and sell the April, 2010 $20 call on the same equity.

Horizontal Spread– A  spread where both options have the same strike price as in the above example but different expiration dates. The terms calendar and horizontal spreads are interchangeable.

Diagonal Spread– A long and short options position with different expirations AND strikes. For example, you buy the December $20, 2010 call and sell the April, 2010 $25 call.

Concept behind this strategy:

The investor establishes the long option position by purchasing (usually) I-T-M LEAPS and then selling a near-term, slightly O-T-M call, the short position. Trades are constructed such that, if assigned, the difference between the spread ($5 in the above case where the $20 call was bought and the $25 call was sold) + the short premium collected, exceeds the cost of the long option. If unassigned, where the price of the stock does not exceed the strike price of the short call, we then continue to write calls and generate a monthly cash flow. The problem in this second scenario is that if the stock price falls, the premiums generated from the short call drops unless we write for a lower strike, which may result in a loss for this long-term strategy as the spread (difference between the two strikes) declines.

Let’s take a look at the options chain for a highly traded equity, INTC: 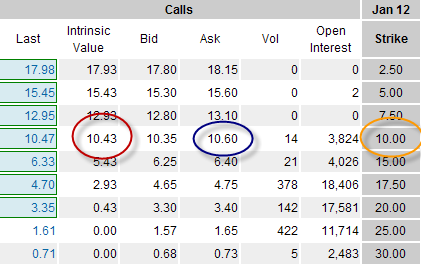 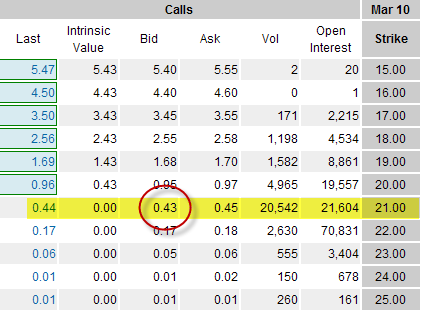 Let’s do the math, if assigned:

If the shares are not assigned (price of stock NOT greater than the strike of the short call ($21), our profit is $43/$1060 = 4.1% and we’re free to sell another option. As noted above, this works well as long as the share price does not dramatically decline thereby reducing the returns on the short options. We also must bear in mind that the long call (LEAPS) is a decaying asset and there will become a time when we no longer own the right to purchase INTC at the $10 strike (when the option period expires). If we continue to generate monthly returns of $43, how long will it take us to retrieve the $1060, if never assigned? Here’s the math:

Our option is good for about 22 months, so if the option ultimately expires worthless and the spread has decreased, we lose! Diagonal spreads work best for rising stocks where we can take advantage of the difference in the original strike prices.

You do NOT capture stock dividends

Purchasing LEAPS and selling a call option on that position is NOT a true covered call write. It is an alternate strategy that has its pros and cons. For most Blue Collar Investors, covered call writing is the better path to take. But to some investors who fully understand the nuances of diagonal spreads, this may be a viable alternative.

Sleeping with the PIIGS? 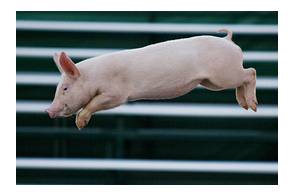 On many financial programs recently we have heard experts discussing whether companies had exposure to the “PIIGS”. Is this a misspelling of a bad joke? Actually it isn’t. PIIGS is an unflattering acronym for the Eurozone countries of southern Europe known for similar economic environments, high spending, large public sector workforces and high debt:

Since these nations use the euro as their currency, they cannot use independent monetary policy to counteract the economic downturn. Europe isn’t thrilled with the term “PIIGS” so Jamie Dimon, J.P Morgan CEO made matters worse by referencing these countries as the “GIPSI” nations (not sure who should be upset here). Is there not a voice of reason out there? How about Citigroup officials who recently called these the GIIPS countries? That may work but then we need a board meeting to decide if the first letter has a soft “J” or a hard “G” sound. Anyway, exposure to these countries is a negative for a corporation and that is why this discussion has become so prevalent.

With the European debt crisis, our debt ceiling issues, our politicians appearing to get crazier every day and earnings season upon us, we continue our bumpy ride in the stock market. This week’s economic reports leaned to the negative with some calming news regarding inflation:

For the past year this site has been bullish on the market but in times of volatility selling in-the-money strikes to garner additional protection. A 1-year, longer-term chart explains my bullish position: 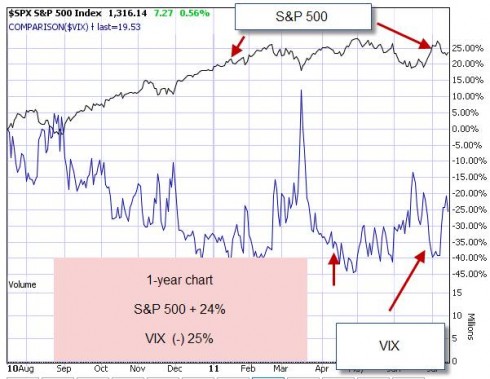 This chart clearly reflects a calming VIX and an ascending S&P 500, the market benchmark.

However, a look at the shorter term, 3-month chart highlights the market benchmark in a trading range (relatively flat) and the VIX in a volatile yet ascending pattern: 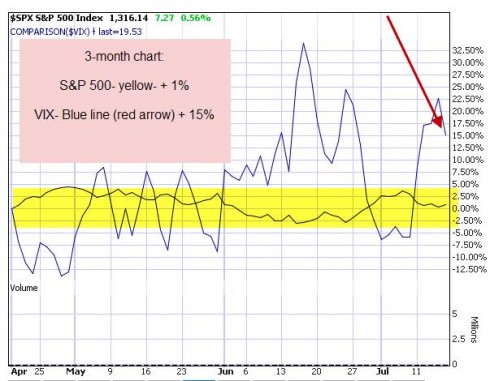 So we have a longer term bullish picture with a shorter-term riskier pattern.

Posted on July 16, 2011 by Alan Ellman in Stock Option Strategies

Click here to cancel reply.
← The Case for 1-Month Options
Setting Up Your Portfolio Using the Ellman Calculator and the Premium Report →