Covered call writing is a strategy we use to generate consistent monthly cash flow, re-invest profits and ultimately to become financially independent. We strive to beat the market by using sound fundamental, technical and common sense principles. But why are we getting paid more than treasuries, CDs or money market accounts? The answer is that we are generating these high returns for undertaking risk. The whole basis of the BCI methodology is to undertake modest risk and mitigate that risk through a series of guidelines and principles set forth in our books and DVD Programs. Wouldn’t it be great if we were to receive these higher returns and not be required to undertake any risk? That was a rhetorical question…deep down inside we all know that there is no legal way of accomplishing that goal. But it’s always fun trying to find that ultimate strategy that even the most sophisticated of computers has yet to uncover.

Recently, I responded to a comment made by Tony and felt it was worthy of a blog article because of the impressive thinking that went behind the inquiry as well as the lessons learned. The question presented was the following strategy, a “can’t-lose” approach to covered call writing?

Principles used to develop this strategy

Tony used his knowledge of the advantages presented to us of using in-the-money strikes. We can generate a time value component of the option premium which represents our initial profit and also have an insurance policy to protect that profit in the form of the intrinsic value component of the premium…intrinsic value protects the time value. It appears 0n the surface that if share depreciates and the position is closed as the strike is approached that we are fully protected and cannot lose (do you sense a “but” coming?).

The reality of options and why there is no free lunch

The chart below shows the time value components for in-the-money and near-the-money strikes for FB: 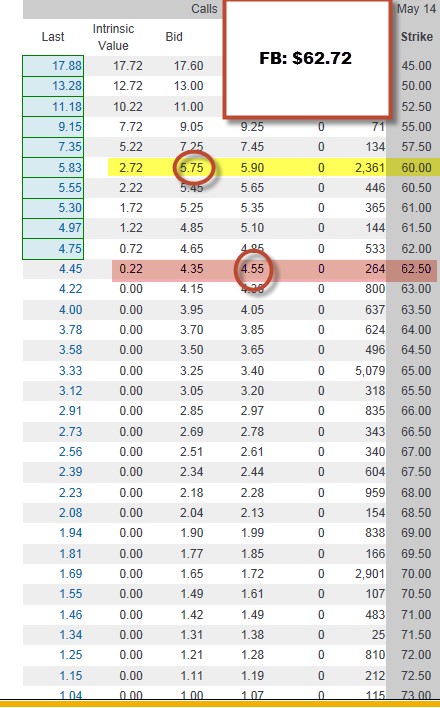 If we thought about it and there was, in fact, a “can’t lose” strategy, who are the folks taking the other side of our trades? They can’t win! Eventually, they would wise up and such trades would no longer exist. We trade in markets, hopefully we all trade in fair market conditions. Our edge (“the BCI edge”) over everyone else is the due-diligence we execute regarding the major 3 aspects of covered call writing:

This is what gives us our edge in this low-risk, but not no-risk, strategy.

With thanks to Tony.

Economic news continues to be mildly positive as it has for the past few years as recovery and expansion continues to support our stock market:

Wishing all our members a happy and healthy holiday weekend.

Leave a Reply to Adrian