Evaluating the Performance of our Mutual Funds and Financial Advisors

Utilizing a portfolio of mutual fund investments is a topic I have addressed in my book, Stock Investing for Students. Investing with these securities represents a longer-term investment plan than covered call writing and selling cash-secured puts. A significant number of retail investors use financial advisors to select various mutual funds for their portfolios in hopes of generating the highest possible returns. In exchange for their management skills and guidance, these advisors are paid a commission frequently based on a percentage of the net worth of our portfolios, usually between 1-2%. Let me premise this article by stating that there are many outstanding financial consultants who are worth every penny of the fees we pay them. I understand that there are hard-working retail investors who would prefer to have a professional manage their hard-earned money. I get it. However, I will never stop stressing the importance of educating ourselves to the point where we can at least evaluate the performance of the investments these advisors have put us in and therefore the success or lack thereof of our money managers. In this article, I will highlight one approach to such an evaluation process to generate a “report card” for the mutual funds in our portfolio and therefore for our wealth managers or ourselves if we selected the funds. First some definitions.

Mutual Fund: Mutual funds are investment vehicles that allow us to pool our money together with other investors to purchase a collection of stocks, bonds, or other securities that might be difficult to recreate on our own.

Actively-managed Mutual Funds: These funds utilize the human element, such as a single manager or a team of managers, to actively manage a fund’s portfolio. They depend on analytical research, forecasts, and their own judgment and experience in making investment decisions.

Passively-Managed Mutual Funds: These funds operate the opposite of active management, better known as “indexing”, where a fund’s portfolio mirrors a market index. They are normally associated with low operating expenses and low portfolio turnover.

Developing our “report card” for our mutual funds and financial advisors

If we are paying a fee (well-deserved in many cases) to our advisors, then we would expect that the actively-managed mutual funds selected for our portfolios would out-perform index-based mutual funds (“the market”) by at least the amount of the fees we are paying them. If this is the case, these specialists are worth their weight in gold. However, if the funds are under-performing the overall market performance, should we not re-evaluate who we are trusting with our hard-earned money?

In May of 2015, I read an article titled Kiplinger’s 25 Favorite No-Load Funds. A no-load fund is a mutual fund in which shares are sold without a commission or sales charge. The reason for this is that the shares are distributed directly by the investment company, instead of going through a secondary party. The article is typical of other such financial advisory publications. The goal of this article is to show a 1-year performance comparison of this list of actively-managed mutual funds to a broad market benchmark index fund. For the benchmark fund, I have selected Vanguard 500 Index Fund Admiral Shares (VFIAX). I made this selection based on the facts that the S&P 500 is universally accepted as a reflection of the broad “market” and Vanguard funds generally have very low expense ratios (low administrative costs). 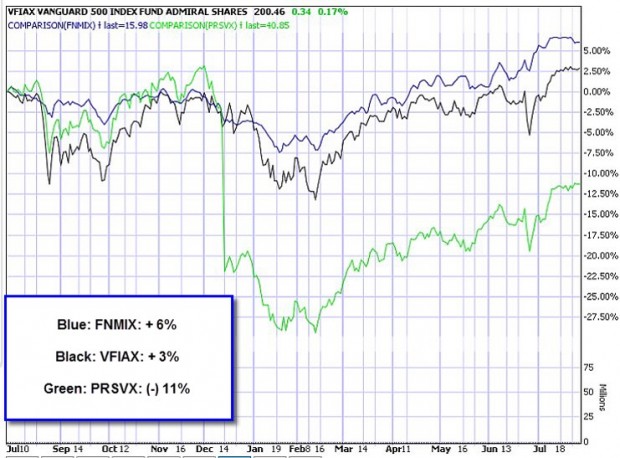 Our brokerage sites may have the tools for comparison charts or free sites like www.stockcharts.com (Perf Charts). 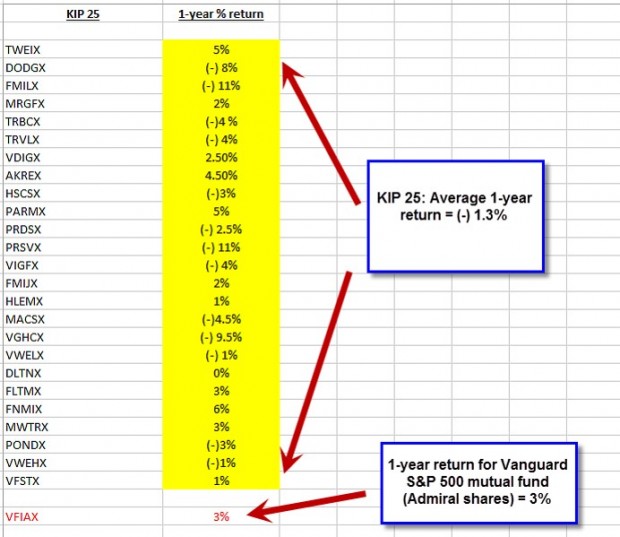 The spreadsheet shows that, over a 1-year time frame, the KIP 25 declined in value by 1.3%, on average. In that same period, the benchmark index fund appreciated in value by 3%.

This exercise is in no way a commentary on Kiplinger Advisory service. It is fair to assume that competent advisors would move clients in and out of funds as new information becomes available. However, it is fair to say that this brief exercise does highlight the importance of having the ability to evaluate the performance of both our securities and that of our advisors. Generally, index funds with low expense ratios will outperform actively-managed mutual funds although there are exceptions to this rule.

Global stocks extended gains this week assisted by upbeat economic data and continued hopes for US fiscal stimulus. Oil prices solidified, with West Texas Intermediate crude rising to $53.90 from $53.25 before the holidays. The Chicago Board Options Exchange Volatility Index (VIX) was little changed at 11.28. This week’s reports and international news of importance:

Wishing you the best in investing and a HAPPY NEW YEAR,

← Rolling Out-and-Up After Understanding the Math
Over-Trading Our Option Positions: Good for Brokers, Not Good For Us →