The KORS initial public offering was the topic du jour among my girlfriends at a holiday party last December.  The ladies I know who invest in stocks were trying to figure out how to get in on the IPO before the share price surged.   It is human nature to want to invest in companies you like, especially when you are a consumer of their products!  My favorite purse is a Michael Kors.  Every time I carry it, its caramel-colored, buttery leather causes my friends and acquaintances to pepper me with compliments.

So why not invest in this fab company?  Especially when my friends were planning to do so?  First of all, just because I like to “buy and wear” a company’s clothes and accessories doesn’t mean I want to “buy and hold” its stock.  I used to invest in only stocks but when I evolved into a covered call writer, my emotions took a back seat to logic.  Successful covered call writers are logical and follow rules.  Although writing out-of-the money calls can be an income supplement to buy-and-hold investing, typically the covered call investor isn’t wed to a specific company for any serious length of time.  We are generally looking for maximum return, with minimum risk, within a defined time period.

Some of my friends bought stock the day of and day after the IPO but I held out.  The Blue Collar Investor advises caution when attempting to trade a stock with little or no trading history.

In the face of a tepid stock market, KORS had a successful IPO. Its shares opened at $25, up 20% from its $20 offering price, and closed the first trading day at $24.20.  (Contrast that with the Facebook IPO.)  If you had gotten in at that time, you would have earned a great return.  But had you bought the stock later, perhaps in late February or March, your investment would have stayed flat through mid-August. Unless you were writing covered calls, your money wouldn’t have been working for you.

Earnings season is here and as the chart illustrates, in two of the three quarterly earnings events, the stock gapped up significantly.  Will that happen again on November 13?  I don’t know, but what I do know is that I was delighted to see KORS show up as a fairly strong covered call candidate on the BCI premium report!

It was like waiting nine months for a beautiful purse I had been coveting to go on sale.  On Oct 15 I submitted an order to buy 200 shares at $53.87 and sell 2 Nov 17 calls with a $55 strike price at a premium of $2.92 a share.  Typically OTM calls wouldn’t have such a high premium but since earnings are announced within the November options cycle, that partially explains the high price.  KORS had been on the BCI Premium Service “running list” for ten weeks and had a fairly high and constant segment rank of B/B. 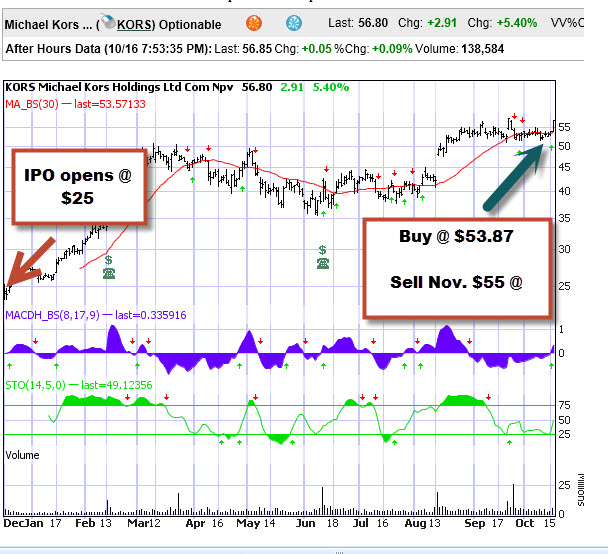 Here is what the profit and loss chart tells me:

My max gain is $810 which I will realize if the stock stays above $55 by expiration.  The high premium gave me lots of downside protection and I break even if the stock goes down to as low as around $51.  Since I want to be out of the position before the Nov 13 earnings announcement, I need to determine what my potential gain could be if I closed the position before then.   The red line shows max gain if I stay in through expiration.  The white line is what the gain would be on Nov 12 under various potential prices of the underlying stock.

I’m typically satisfied if I make 70-80% of maximum gain for any position so I think my plan to sell the stock and buy back the call before the earnings announcement will provide me a nice reward with little risk.

I am humbled to announce that I have been nominated as a finalist in the Author’s Show contest “50 Great Writers You Should Be Reading”  If successful, I will be included in an upcoming publication of the same name.Many thanks to YOU, our members,  for “putting me on the map”  and to the Author’s Show for this honor.The voting runs from November 2nd to November 11th. My three books are currently ranked 1, 2 and 3 on Amazon.com on the subject of covered call writing. As many of you know, I have been writing weekly blog articles on this site for the past five years and guest blog for Seeking Alpha and OilPrice.com. If I have earned your vote, here are links to the contest information and to the vote page:

Live in the Chicago area?

I will be the keynote speaker on Saturday November 10th:

The good news is that economic reports are looking positive for our recovery. However, global, political and climate-related issues are making investors nervous and market tone tenuous:

BCI: This site is taking a cautious approach at this time, favoring in-the-money strikes, low-beta stocks and ETFs. Less experienced investors should consider keeping at least some cash on the sidelines until a more definite market tone can be established. We are still long-term bullish.

I hope you are all well and safe.