When studying covered call writing we learn to master stock investing as well as option trading basics. Then we become elite investors by focusing in on the inter-relationship between the two. In this regard, a story most of us have been following the past two weeks has been the initial public offering (IPO) of Facebook (FB). The initial sale price was set @ $38 on May 18th. After opening, the stock price skyrocketed to $45 and settled at the end of the first day of trading at $38. Was this a coincidence? At the time I started writing this article, the price was down to $28.19. This week’s article will explore the role of options in the price behavior of Facebook that first day and introduce the Greenshoe option, perhaps a new name to many of our members.

A Greenshoe option is a provision contained in an underwriting agreement that gives the underwriter (Morgan Stanley was the main underwriter , in this case) the right to sell investors more shares than originally planned by the issuer (Facebook, in this case). The purpose is to provide price stability as the underwriter has the ability to increase supply and compensate for price fluctuations if demand increases.

On May 18th, Morgan Stanley sold $484 million shares of FB @$38 per share and simultaneously bought 421 million shares from the company and investors @ $37.58 generating an initial 1.1% profit which represented the underwriter’s fee. Not bad!

In essence, Morgan Stanley shorted 63 million shares of FB which represents the greenshoe. From Facebook’s perspective, shorts eventually need to be covered resulting in upward pressure on the stock price. It also provides market liquidity if there is great demand for the stock. Now from Morgan’s perspective this was not truly a “naked short” because of the greenshoe option which gave them the right to go back to Facebook and purchase an additional 63 million shares @ $38 (less fees). So what were the possibilities?

1- The IPO is a huge success and the price moves higher. Then Morgan sells those shares to the anxious buyers.

2- The IPO is a dud and the price declines. Now Morgan will cover the short by buying back shares @ market price. This buying action will tend to support share price at least for that first day. It was, in fact, no coincidence that on May 18th whenever the price declined to around $38, large blocks of shares were purchased.

To further support this scenario, look at these stats from Friday, May 18th:

Common sense tells us that most of that buying was Morgan Stanley attempting to support the share price of an unsuccessful IPO.

On Monday, May 21st, it appears that the greenshoe was exhausted as the price plummeted to $34 as shown in the chart below:

When an IPO is introduced there is a lot of speculation and excitement regarding the direction and strength of a price movement. Many retail investors will buy a stock like Facebook because it is ubiquitous and synonymous with success. It’s tempting to hand over our hard-earned cash to be part of the American dream. Understood. Now, with the knowledge of the role of greenshoe options for the underwriters we can watch the price action of the stock on the first day of trading. An initial pop is understandable, almost expected. When we subsequently see a drop in share price and then buying to keep the price at or about the original IPO price we can make the leap that the greenshoe effect is kicking in. That gives us an opportunity to get out at the $38 price. True, that may be a loss but $38 seems a whole lot better than the under $28 I’m staring at today as I type these words.

Covered call writing is not only a great investment strategy for many investors but also represents a fabulous educational background to learn and understand the practical application of stock and option investing. Although the Facebook story is not directly related to our covered call writing investing at this point in time it does represent an interesting story where we can put our knowledge and skills to practical use in understanding a dynamic that few others can comprehend.

The term “greenshoe” comes from Green Shoe Manufacturing, the first company to allow underwriters to use this strategy. This is the company we know today as Stride Rite Corp.

June 12th: I will be the keynote speaker for the New York City Private Investors Group at the ING Direct Cafe:

Admission is FREE and non-members are welcome.

Cashing in on Covered Calls:

Cashing in on Covered Calls

This week’s economic reports were predominantly negative and suggesting a slower recovery than previously anticipated:

You don’t need me to tell you that the market technicals have broken down with the S&P 500 down 6% in the past 6 months while the VIX has climbed by 55% in that same time frame: 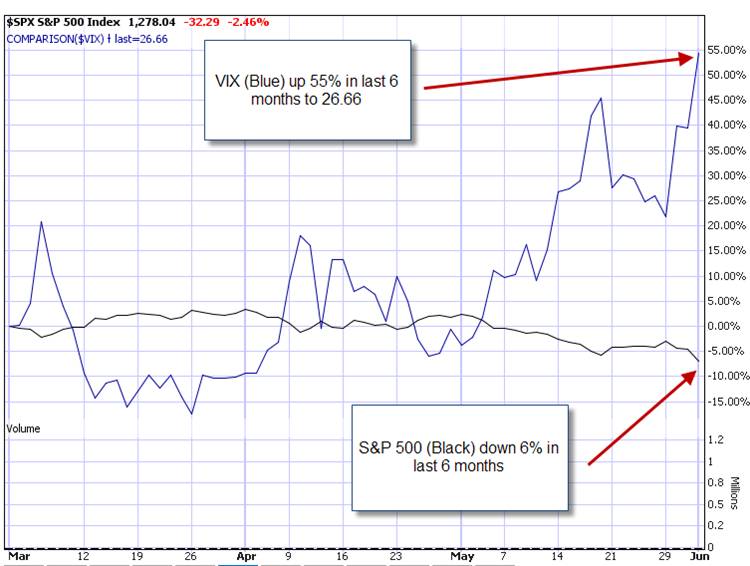 BCI: Cautiously optimistic on the US economy but concerned about market volatility and signs of an even more sluggish recovery. Add to that European concerns and a Congress in gridlock we have a higher level of risk than in normal market conditions. As a result this site is using ONLY low beta stocks or ETFs with ONLY in-the-money strikes. It is more critical than ever to use every exit strategy opportunity when indicated.