An integral part of understanding option trading basics, is mastering the components that influence option value. Many option traders will look to make money as a result of a discrepancy between an option’s current market value and its theoretical value. In other words, is the option overpriced or undervalued? If, for example, an option is calculated to be underpriced an investor will purchase it and look to sell it when market forces return it to the higher, more appropriate value. An analogy would be if you found a real estate property on sale for $100k in an area where similar homes were selling for $120k…buy low and sell high. In order to utilize this approach, we would first need to determine the theoretical value (a mathematically derived estimate of the value of the contract) of the option to determine if it is priced fairly.

The most well known of these option pricing models is the Black-Scholes Model introduced by Fischer Black and Myron Scholes in 1973. The following option and underlying characteristics need to be known for the calculations:

Parameters used for the Black-Scholes Model:

These parameters are entered into the formula developed by Black and Scholes and a theoretical value for the option is calculated and then compared to the current market value. There have been several variations of the Black-Scholes Model developed since 1973 but the original remains the most popular amongst traders. There are several assumptions made by this model some of which have come under criticism:

A discussion of the Assumptions of the Black-Scholes Model:

1)  The stock pays no dividends during the option’s life

The model assumes that the option can only be exercised on the expiration date. We, in fact, use American style options which allow the option to be exercised at any time during the life of the option, making American options more valuable due to their greater flexibility. This limitation is not a major concern because very few calls are ever exercised before the last few days of their life. This is true because when you exercise a call early, you lose the remaining time value on the call and collect only the intrinsic value.

This assumption suggests that people cannot consistently predict the direction of the market or an individual stock. The Black-Scholes model assumes stocks move in a manner referred to as a random walk. Random walk means that at any given moment in time, the price of the underlying stock can go up or down with the same probability. The price of a stock in time t+1 is independent from the price in time t.

4) No commissions are charged

Usually market participants do have to pay a commission to buy or sell options. Even floor traders pay some kind of fee, but it is usually very small. The fees that individual investor’s pay is more substantial and can often distort the output of the model.

U.S. Government Treasury Bills 30-day rate can be used since the U. S. government is deemed to be credible enough. However, these treasury rates can change in times of increased volatility.

The Black-Scholes model assumes that markets are perfectly liquid and it is possible to purchase or sell any amount of stock or options at any given time.

This assumption suggests returns on the underlying stock is normally distributed, which is reasonable for most assets that offer options.

Effect of changing market conditions on an options theoretical value:

1) As the stock price rises, the call value rises and the put value falls and vice versa.

Volatility used in the Black-Scholes Model: 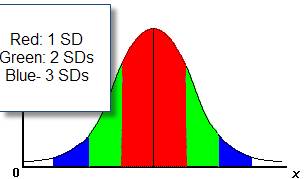 The method used by most options traders to determine the theoretical value of an option is the Black-Scholes Model. Certain parameters are fed into the equation and several assumptions are made to calculate the figure. It is important to understand the strengths and weaknesses of this model as we apply it to our investment strategies. For covered call writers it is more important to understand the relationship of the parameters to option and stock value rather than actually calculate theoretical value which is of more value to the traditional options trader.

With the election thankfully over attention has turned to the “fiscal cliff” which requires congressional agreement (an odd concept!) on tax policy and national debt. This understandably has negatively impacted our markets as has continued concerns over the European debt crisis. This week’s economic reports:

BCI: This site is taking a conservative and cautious approach as we wait for the debate over the fiscal cliff. We are using in-the-money strikes, low beta stocks and ETFs. Those new to investing with stock options may want to keep some cash on the sidelines.