Maximizing covered call writing returns requires the use of a series of exit strategies. One of the most common mistakes covered call writers are guilty of is not managing trades during the contract cycle. I was guilty as charged when I first started using this great strategy and learned my lessons the hard way. I share my experiences with our BCI community in hopes that our members will develop the skills to maximize returns without having to pay for those lessons.

One of my favorite exit strategies is “hitting a double” (my term, not found in Wall Street insider books). By being prepared to use this strategy we can actually generate a second income stream IN THE SAME MONTH with THE SAME CASH.  When we “hit a double,” we buy back the option (buy-to-close) assuming it meets our 20%-10% guidelines, and simply watch the stock price without taking additional immediate action. Here, the goal is to wait for the underlying equity to appreciate in value in a relatively short period of time after the initial buy-back of the option, thereby driving up the option value. If this occurs, we can sell the exact same option (same strike and expiration date) and generate a second income stream from the same option, or, in other words, “hit a double.” Over the years, I have actually also hit a few “triples,” wherein the same option was sold three times prior to its expiration!

As s rule of thumb, we attempt to “hit a double” when the market tone and stock technicals are mixed to positive earlier in the contract period (especially during the first week or early in the second).

Real-life example of “hitting a double:”

The chart below depicts an actual example of when I “hit a double” with respect to a prior covered call position in Blue Coat Systems, Inc (BCSI), which ultimately generated an additional $868 into my account. Bear in mind that the additional $868 does NOT include the original $992 I “earned” when I sold the option for the first time. First, let’s look at the chart for BCSI as it existed at the time this exit strategy was implemented: 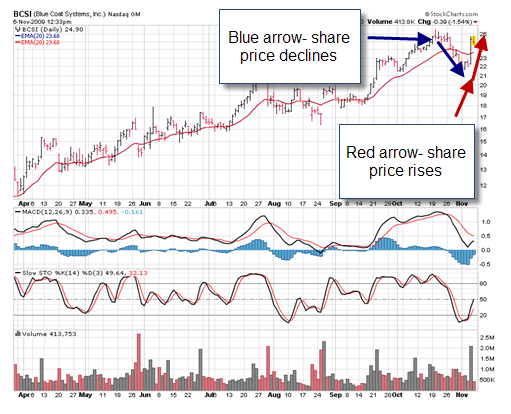 “Hitting a Double” with BCSI

Note how BCSI took a big plunge (blue arrow) and then recovered quickly over the next two weeks (red arrow). Here are the four prongs of this one-month investment:

As demonstrated in the above-referenced example, the “hitting a double” exit strategy is best utilized when the underlying equity, and thus, the option premium, will appreciate in value in a relatively short period of time after having declined in value.  If, however, the price of the underlying equity does not appreciate in this manner, we can then look to roll down, or alternatively, to possibly implement our third exit strategy, which involves selling the stock and “converting dead money to cash profits.”

Link to my upcoming live seminar in Chicago:

This week’s reports told a story of slower growth but increasing consumer confidence: