One of the three required skills for covered call writing and put-selling is the selection of the underlying security. Along with this we also must avoid quarterly earnings reports. Since most corporations report earnings in similar time frames (known as earnings season) the number of eligible candidates is dramatically reduced during these time frames. The BCI way is NOT to moan about these challenges but rather to develop a methodology to circumvent and overcome them. Here are some of the strategies we have developed regarding enhancing the number of eligible underlying securities during the heart of earnings season when employing monthly options:

In this article, I will discuss how to use Weekly-expiring options in conjunction with our Premium Reports to enhance the number of eligible stocks while still adhering to our rule of avoiding earnings reports.

Premium Report (page 3 shown) at the start of the November, 2015 contracts 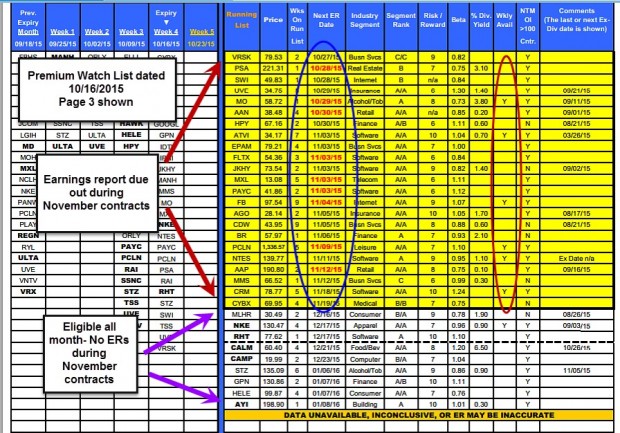 We will focus in on page 3 of this report with the understanding that there are a few more candidates on page 2. Please note the following:

There are six stocks in the gold rows that also have Weeklys. Since this is a 5-week contract, each of these six securities will be eligible for four of those five weeks. Here is a breakdown of how we can use this approach to add more eligible securities: 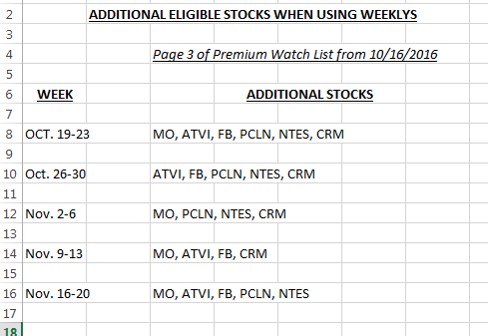 By using our Premium Watch Lists and Weekly options, we can enrich the quality and quantity of eligible stocks during the heart of earnings season. All the required information is located on pages 2 – 4 of our Premium Reports.

US economic indicators were modestly positive but global reports pointed to challenges regarding slower growth. Reflecting relatively calm markets, the Chicago Board Options Exchange Volatility Index (VIX) trended down to the 15 range after beginning last week near 20. This week’s reports:

BCI: Cautiously bullish but maintaining a defensive posture selling at least 50% in-the-money strikes and deeper out-of-the-money puts. The market was flat to slightly down in 2015. For those of us who were able to generate a decent profit for the year selling options…congratulations as all ther hard work and due-diligence has paid off. For those starting out, the market historically rises by 8-10% which provides an environment much easier to generate significant returns.

The BCI team wishes you a happy and healthy New Year and a lucrative 2016,