Is Covered Call Writing a Zero Sum Game? Let’s Do the Math

Many assume that covered call writing is a zero sum game because we have traders executing equal but opposite trades using the same underlying security. As a covered call writer, we may sell 5 contracts of AAPL which means there is a buyer out there who just bought our contracts. If we win, they lose and vice-versa, right? Well, let’s examine, the Blue Collar way. We will set up two hypothetical scenarios, first for naked options and then for covered call writing and see if either can be viewed as a zero sum game.

Naked option trading: Stock price moves up to $53.00 by expiration

The call buyer paid $1.00 for the option which is now worth $3.00 in intrinsic value resulting in a profit of $2.00. The call seller generated an initial profit of $1.00 and now is required to either buy back the option for $3.00 (plus a small time value premium) or buy the shares at $53.00 to deliver them at $50.00. Either way, there is a net loss of at least $2.00. This scenario does appear to be a zero sum game given no exit strategy execution and leaving both positions until contract expiration.

Covered call writing: Stock price moves up to $53.00 by expiration

Assuming no exit strategy executions, the call writer generates a profit of $1.00 on the sale of the option and shares are sold at $50.00, the price paid for the stock, netting a profit of $1.00. The call buyer paid $1.00 for the option which is now worth $3.00 in intrinsic value resulting in a net profit of $2.00. This does not appear to be a zero sum game.

Covered call writing: Stock price moves down to $47.00 by expiration

Is it possible for one position to make money and the other to lose money?

Yes, if share price moves down less than the option premium originally generated, the covered call writer will make a profit while the naked option buyer will be in a losing position. Let’s say share prices declines to $49.50. The covered call writer will have a net credit of $0.50 per share or $50.00 per contract. The option buyer will lose the $1.00 paid for the option which expires worthless. 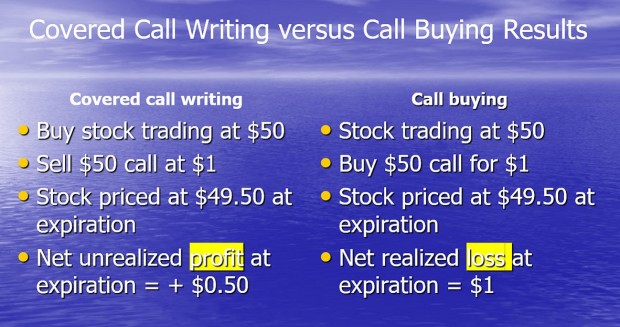 This article was inspired by several of our members who inquired about zero sum games and offered different perspectives on their opinions regarding the topic. This article offers a mathematical perspective. Most options are closed and so only a small percentage actually last to expiration. Also, many option traders have an arsenal of position management techniques that will mitigate losses and enhance gains. A fair takeaway would be that naked option trading with positions left until expiration can reflect a zero sum game while covered call writing does not.

Global stocks were little changed on the week withstanding presidential elections in France and South Korea and political turbulence in Washington. West Texas Intermediate crude oil rose modestly to $47.50 a barrel from last week’s $45.50.   This week’s reports and international news of importance:

BCI: I am currently cautiously bullish, favoring out-of-the-money strikes 3-to-2.

46 Responses to “Is Covered Call Writing a Zero Sum Game? Let’s Do the Math”