LEAPS are long-term options with expirations usually greater than 1 year. 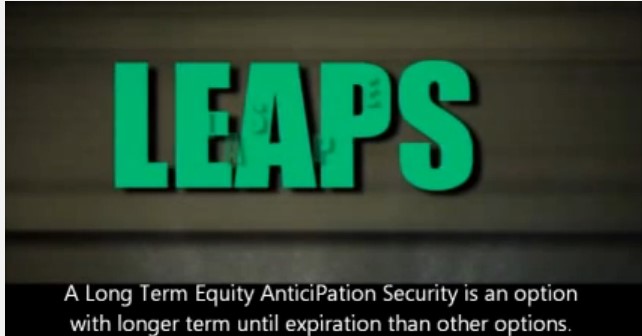 Some investors buy LEAPS instead of stocks to then write covered calls on this leveraged type of security. This is related to, but not recisely the same, as traditional covered call writing. The best term to describe this strategy is called a calendar spread where you simultaneously establish long and short options positions on the same underlying stock with different expiration dates.

Here’s how the strategy is set up:

There are many ways to generate profits in the stock market and using LEAPS as stock surrogates when using a covered call writing-like strategy is one of them. This strategy is a bit more complicated than traditional covered call writing (my personal preference) and has its pros and cons. Each aspect of the strategy should be mastered before considering risking your hard-earned money employing it.

Many of our members have asked me if I was hosting a seminar at The Las Vegas Money Show this month. The folks at The Money Show were generous enough to invite me to speak at this great event but I had a previous commitment to host a private webinar in May. I also wanted to devote a solid month and a half to finishing my 5th book relating to selling cash-secured puts, a book many of you have been asking for. This week I completed the first draft and expect to have the book published before the end of the year.

Thanks to your incredible support, The Blue Collar Investor has been growing faster and stronger than we ever believed possible. That has attracted many other experts to request to do joint ventures with us that will allow us to provide more and enhanced information and tools for our members. Keep an eye on this site as we expect to be making several exciting announcements regarding these enhancements in the near future.

My next live seminar will be in Orange County, California on June 14th. I’ll provide a link once I receive it from the investment club.

BCI: We have a choppy but stubbornly-holding stock market with mostly favorable economic reports and positive earnings for our corporations once again. This site remains moderately bullish and selling an equal number of in-the-money and out-of-the-money call options.

14 Responses to “LEAPS As Stock Surrogates And Covered Call Writing”

Click here to cancel reply.
← Vega: An Option Greek And How It Impacts Our Option Pemiums
Covered Call Writing With A Twist: Selling 2 Calls Per 100 Shares →