MACD: A Lagging and Momentum Technical Indicator: Part I

Technical analysis is as much an art as it is a science. No one parameter, by itself, will allow us to make our buy/sell decisions. However, when all the indicators are used together, they paint a picture that is critical to maximizing our covered call success. A review of these indicators periodically can be a valuable reminder as to the significance and importance of these tools. One of the most simple and reliable of these parameters is the Moving Average Convergence Divergence, or MACD.

MACD is one of the most basic and effective “momentum” indicators that also serves as a trend-following indicator. So let’s call the MACD a trend-following momentum indicator. Momentum is defined as the rate of acceleration of a stock’s price and trend in an upward or downward direction. The MACD is formed by subtracting a longer-term exponential moving average (EMA) from a shorter-term EMA (which are trend following indicators). The resulting plot forms a line that oscillates above and below zero without any upper or lower limits.   So what does the MACD tell us?  In short, MACD gives us prior notice before two EMAs cross.  This notice can be used to discern bullish (buy) and bearish (sell) signals, as described in detail below.

The stock’s 26-d EMA is subtracted from its 12-d EMA. The resulting line created by these price points is called the MACD. A 9-d EMA of the MACD itself is also plotted and acts as a “trigger line.” A 9-day EMA is used so we can get a quick reading on the potential changing momentum of an equity’s price. The subtraction of the trigger line from the MACD itself is the basis for the MACD Histogram, an even quicker indicator than the MACD ( to be detailed in next week’s blog). Let’s look at a chart (bottom quarter) which depicts these parameters:

The black arrow shows the MACD itself (black line); the red arrow shows the trigger line (red line); and the blue arrow points to the MACD Histogram (light blue bars). Note how the MACD oscillates above and below the zero line, which is also known as the “centerline.”

There are three types of bullish signals that can be detected from the MACD: (1) positive divergence; (2) bullish moving average crossover; and (3) bullish centerline crossover.

1- Positive Divergence– the MACD begins to advance while the security itself remains in a downtrend (Figure below):

Note how the red arrows depict the MACD (black line) crossing above the trigger line (red line), with the histogram (light blue bars) turning positive. The price of the stock then skyrockets (long red arrow). Whenever the MACD itself crosses the trigger (9-d EMA) the histogram will be positive (discussed next week).

3- Bullish Centerline Crossover (Figure below) – the MACD moves above the zero line (centerline) and into positive territory. This can be used as a confirmation of the positive divergence and bullish moving average crossover rather than choosing any one of the three.

As the MACD (black line) moves above the zero line (red arrows), the stock heads north (blue arrows). Using a combination of these bullish signals can produce a more meaningful signal than using just one. I favor the MACD Histogram by itself as it is an earlier indicator of a price change and easily viewed on a chart. The three just described can serve as confirmation when evaluating stocks in more detail.

Utilizing a combination of the three bearish signals above will provide a more reliable indicator of a negative price change in the equity. Once again, when it comes to MACD I generally view the histogram which I will discuss in a future article.

Let’s take a look at a bullish MACD picture for a stock currently on our Premium Stock List: CRZO: 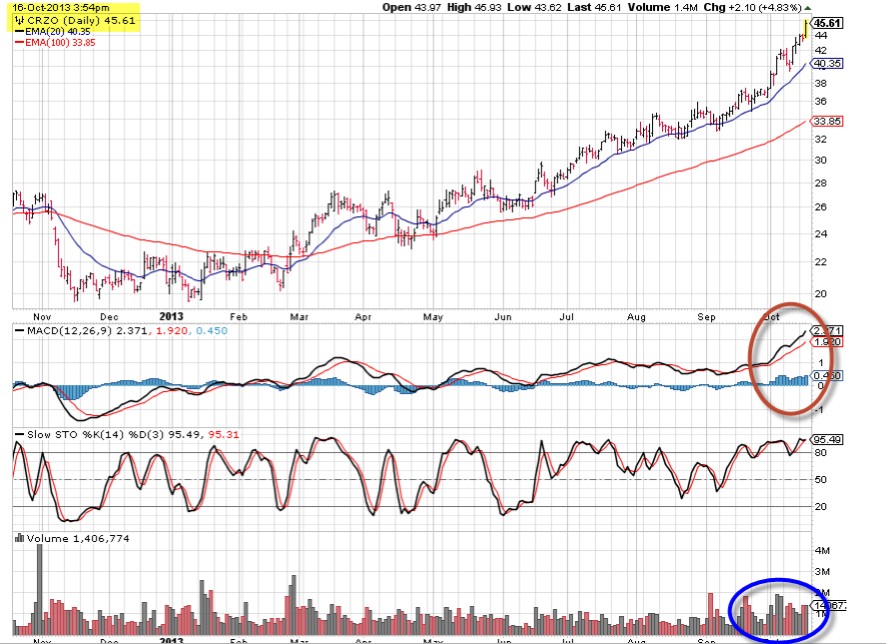 Note that this bullish MACD indicator is also on high volume strengthening the sigificance of this parameter.

With treasury borrowing authority extended to February 7th and the funding of our government guaranteed through January 15th, the markets relaxed a bit…at least for now. Because of the recent shutdown, most economic reports that normally would have come out this week, didn’t:

Yours from the great state of California,

Posted on October 19, 2013 by Alan Ellman in Technical Analysis

8 Responses to “MACD: A Lagging and Momentum Technical Indicator: Part I”