Technical analysis is a critical part of our covered call writing success. We use it for both stock selection, exit strategy execution and timing of our trades. We screen stocks fundamentally and technically via the IBD 50, SmartSelect Scan and MSN Scouter. We make sure we have industry diversification and cash allocation equality. Earnings reports and same-store-monthly retail sales reports are avoided as are companies that trade in low daily volume amounts. Ultimately, we create a watch list of the greatest performing stocks in the greatest performing industries.

In our Blue Collar System, we use moving averages, MACD, the Stochastic Oscillator and Volume to ascertain the technical health of our equity. For me the moving average is king of these parameters with the others playing confirming roles. Each indicator by itself will not suffice, but as a whole they paint a very important picture relating to our buy-sell decisions. First, some key terminology.

When selling 1-month options, I prefer the ema to the sma because it provides a quicker response to a change in the stock price. It also avoids false positives where a stock may jump above the sma but not above the ema. In the chart of AAPL below (taken from www.stockcharts.com), the red line represents the ema and the blue line depicts the sma. Note how the ema starts moving up faster as the stock price appreciates and how the ema would have avoided the false positive in February where the price momentarily breaks through the sma but then drops dramatically:

The parameters I like to use (for covered call writing) are the 20-d and 100-d EMAs. The 20-d approximates the number of trading days in the 1-month contract. The 100-d represents 20 weeks (5 trading days/week) or five months and gives us a longer term perspective to compare with the shorter term 20-d ema. When viewing the moving average indicator, we like to see the 20-d above the 100-d ema and the price bars at or above the 20-d ema. This shows a positive upward momentum and favors (but does not guarantee) continued price appreciation. Moving averages are considered lagging indicators which means they trail the price action of a stock. Thus MAs confirm trends but do not predict them. However, once a trend is identified, we want to be part of that wild ride to cash profits! Here is that same chart of AAPL with the 20-d and 100-d EMAs:

Notice that at the end of March the short term (20-d in blue) moved above longer term (100-d in red) and then stock went to the moon with the price bars at or above the 20-d ema.

When to use moving averages-practical application:

Moving averages have little value when the stock price is in a period of consolidation. In these instances, we turn to our confirming indicators or exclude the stock from consideration. When the stock is downtrending, we opt for another equity. If the security is trending upwards, the price bars are at or above the 20-d ema and the short term ema is above the longer term ema, this is a strong buy signal. The signal is even stronger if confirmed by MACD, Stochastics and volume. Most winning stocks never make a serious breach of the 20-d ema which is now considered support for the share price. This is indicative of institutional support for that equity. On the other hand, when a stock drops sharply below support on high volume, these major players (mutual funds, banks, insurance companies, pension funds etc.) are starting to move out of this stock and so should we.

Moving Averages and the Premium Report:

Moving average information is an inherent part of our weekly premium reports. In the column headed by the term “chart”, a “Y” ranking means the following:

I have highlighted in the chart below equities that meet this criteria as of 4PM EST on the last trading day of the week (Pink columns).

If a stock is trading right at the 20-d ema but not above it, the cell is filled with a “?” and a comment is left stating “Price @ 20 EMA”. I have highlighted this in the “green” rows below: 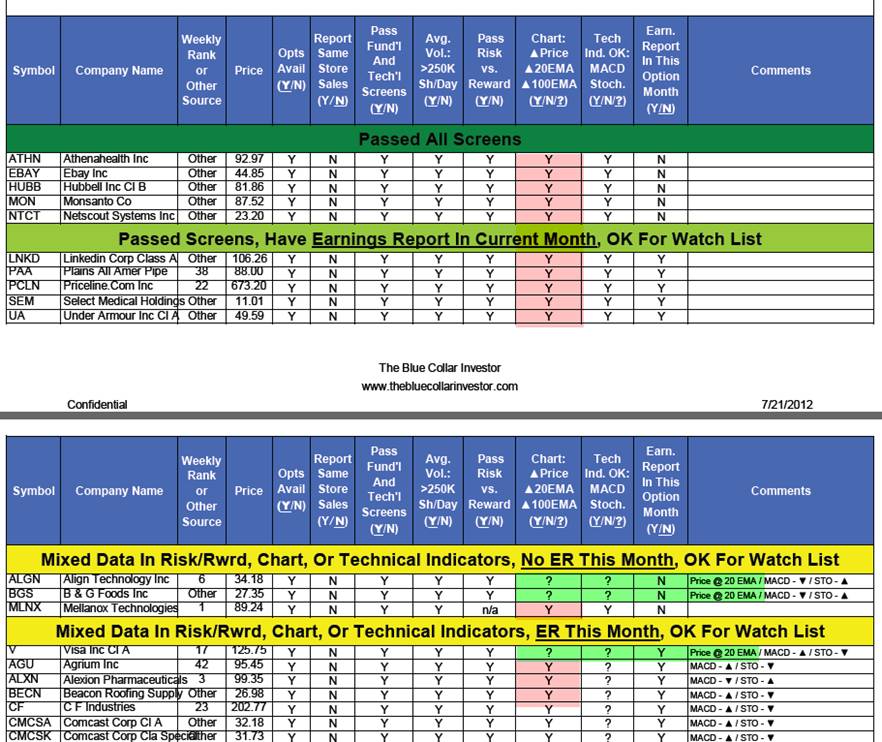 Moving averages are effective tools for identifying and confirming trends as well as support and resistance. This facilitates our trading system as it assists in making our buy-sell decisions. Since it is a lagging indicator, it is not predictive of change as let’s say the MACD is. But as they say on Wall Street, “the trend is your friend” and we want as many friends as possible when investing our hard-earned money. As with all technical tools, moving averages should not be used alone, but rather in conjunction with our other technical indicators.

More information on technical analysis and the confirming indicators are found in Chapter 8 of Cashing in on Covered Calls and Chapter 4 of Alan Ellman’s Encyclopedia for Covered Call Writing.

This week’s economic reports were highlighted by a positive jobs report on Friday which propelled the market into positive territory for the week:

BCI: Cautiously bullish on the economy and the stock market using an equal amount of in-the-money and out-of-the-money strikes. This week many investors re-visited the flash-crash memories of May, 2010 when trading in six equities was halted after an electronic trading system run by Knight Capital malfunctioned. Regulatory agencies are reviewing this matter. This appears to be an isolated incident and does not alter this site’s market assessment.

Posted on August 4, 2012 by Alan Ellman in Technical Analysis

17 Responses to “Moving Averages And Our Covered Call Selections”