Selling out-of-the-money cash-secured puts is a fantastic way to buy a stock at a discount. It can be used in lieu of setting limit orders. If exercised, our cost basis is the put strike minus the put premium generated. If unexercised, we get paid not to buy the stock! For example, if a stock is trading at $32.00 and we sell the 1-month $30.00 out-of-the-money put for $1.00, the following is true:

A concern is that the underlying stock may increase in value and the put will not be exercised. This is not a tragic result because we are getting paid not to purchase the stock. Had we set a limit order, we would not have realized this profit. 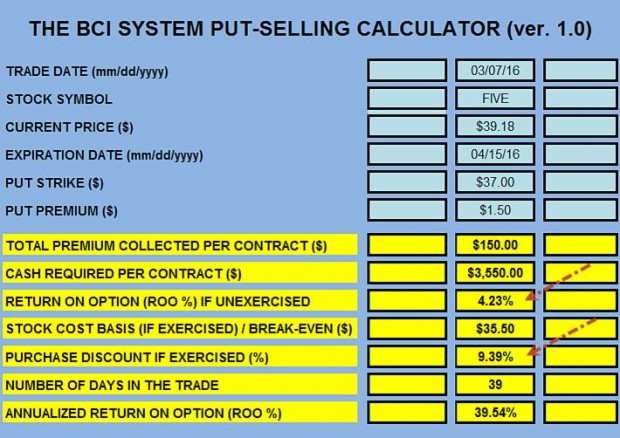 The calculator shows that, if unexercised, we will generate a 4.23%, 5-week return. If exercised, we purchase the stock at a cost basis of $35.50, a 9.39% discount from share price at the time the put was sold.

If the price of FIVE rises, the put premium will decline because of its negative Delta and the chance of assignment declines. Can we make more money? YES. Part of the BCI methodology for put-selling is the 20%/10% guidelines where a put is bought back when the premium declines to 20% (in the first half of a contract) or 10% (in the latter part of a contract) of its original sale price. If share price accelerated to $42.00 in the first half of a contract and put price decreased to $0.30 (20% guideline), we would buy back that option putting ourselves in a position to role-up and generate more cash.

Given the hypothetical that we want to either generate cash flow or purchase a specific stock (FIVE, in this case) at a discount, we can roll up to a strike closer “to-the-money” and generate another option credit. Our original strike was about $2.00 out-of-the-money so a similar strike if share price was now $42.00 would be the $40.00 strike. The premium would be expected to be somewhat lower than $1.50 as Theta is eroding time value. Let’s say we can generate $1.20 on such a put sale. It could be slightly more or less but the concept is the same. After the initial put sale of $1.50, we now generate an additional option credit of $0.90 ($1.20 – $0.30). This is an additional unexercised return of 2.3%. Our total 5-week unexercised return would then be 6.53%. Furthermore, since we are dealing with a put strike closer to-the-money, there is greater chance of exercise, one of our goals.

Cost basis if exercised after rolling up

When selling options, position management is critical to achieving the highest levels of profit. We use exit strategies to mitigate losses and enhance gains. In the example shown in this article, returns were enhanced by rolling up when the 20%/10% guidelines were realized.

The registration and information pages are almost ready for our Premium Members. I’m really looking forward to our new Blue Hour webinar series, free to Premium Members. The topic of our first presentation will be Portfolio Overwriting where we will discuss ways to enhance portfolio returns for long-term buy-and-hold portfolios using covered call writing. Barry Bergman, the BCI Director of Research, will be answering questions live as I host the webinar. I will also address certain selected questions sent to us from members who register. Premium Members who cannot view the presentation live will be able to access the seminar on the Premium Member site as it will be recorded and available to all Premium members, also for free. My team will be beta-testing the site this week and we’ll send out an email to all members when registration is open. This first webinar will be available only to Premium members. Future webinars will also be available to non-members for a modest charge. Member rates will increase on September 1st however all members registered prior to that date will be grandfathered into the current lower rates and will see no rate increase.

Global recovered most of their post-Brexit losses this week, aided by a promise to ease monetary policy by Bank of England Governor Mark Carney. Oil prices recovered as well. The Chicago Board Options Exchange Volatility Index (VIX) declined to 14.80 from 24.45 last week when it rose dramatically after the Brexit vote. This week’s reports and international news of importance:

BCI: Cautiously bullish and now fully invested with 2/3 of my portfolio in individual stocks and 1/3 in ETFs. I have not sold any covered calls this contract month as a result of the Brexit vote and will wait for the July contract expirations to sell calls on the August contracts. I will adjust my positions using the next two Premium Stock and ETF Reports as/if needed to stay fully invested. After the initial market over-reaction, many professional traders elected to short stocks (sell shares they did not own by borrowing them from a broker) in anticipation of a steeper market decline post Brexit vote. They also expected a much longer recovery period. As a result many of these professional traders found themselves buying shares towards the end of the week to mitigate their losses as they “covered” their bearish positions.. This added to the market gains for the week.

Click here to cancel reply.
← Why We Should Avoid ATM and ITM Put Strikes in Bear Markets + A Discussion of Brexit
The Relationship Between Delta and the Time Value of our Options →