Russell Rebalancing Day: A Cause for Concern?

Covered call writers and put-sellers are aware of the value to avoiding risky events like earnings announcements. An impending FDA announcement regarding the efficacy of a new drug being tested is another example. This article will define and explore the potential concerns of trading on or though Russell Rebalancing Day.

What is Russell Rebalancing Day?

This is the annual reconstitution of the Russell Indexes, where the index provider makes rule-based changes to the its indexes, to ensure that market shifts that have occurred in the past year reflect that investors continue to have the most accurate market benchmarks. It usually occurs mid-calendar year.

What are the Russell US Indexes?

Notable changes in the past year

One of the busiest trading days of the year

With approximately $6 trillion in assets tracking the Russell indexes as of December 31, 2015, Russell Reconstitution is a notable event for US equity investors. The annual Russell rebalance, traditionally one of the busiest trading days of the year: according to Bloomberg, last years rebalance helped propel a near record turnover of over 15 billion shares, as a result of the $10 trillion in stocks currently linked to the various Russell indices, many of which will be forced to find new owners after an index recomposition. In fact, in four of the last five years, reconstitution day ranked in the 10 busiest trading sessions. 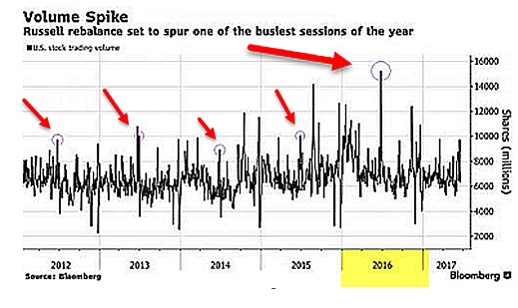 Is this a high-risk event we should avoid?

Surprisingly no. Despite the traditional annual surge in volume, the rebalance rarely leads to spikes in volatility or major market moves: since 2008, the S&P 500 has moved more than 0.5% on the day of rebalancing only twice, in 2011 and 2016. The reason why the transition at the end of the rebalancing day rarely leads to turmoil is because investors are prepared for the changes.

High-risk events like earnings and FDA announcements should be avoided as they lead to increased implied volatility in the underlying securities and therefore make us susceptible to additional market risk. Russell Rebalancing Day does result in a substantial increase in trading volume and liquidity but does not cause a significant change in volatility risk so trading can proceed normally during this annual event.

Global markets moved up this holiday-shortened week with the CBOE Volatility index closing  down at 9.67. This week’s economic and international news of importance:

BCI: My portfolio makeup remains in a neutral bias, selling an equal number of out-of-the-money and in-the-money calls. Waiting to see how the vote on the new tax plan plays out before taking a more bullish stance. Outside of this concern the global economy is performing well.

54 Responses to “Russell Rebalancing Day: A Cause for Concern?”