Selecting the Best Put Strike Based on Overall Market Assessment

Selling cash-secured puts requires us to master the three required skills: stock (or ETF) selection, option selection and position management. This article will highlight how to select a put strike based on our overall market assessment.

Each investor must establish criteria for determining market tone and categorize this parameter as bullish, neutral or bearish.

For most of us who use puts to generate monthly (or weekly) cash flow or to buy stocks at a discount, we focus in on out-of-the-money put strikes. These are strike prices lower than current market value. In addition to generating put premium income, we will also have downside protection if share price should decline. Near-the-money (slightly below current market value) will generate the highest initial premium returns but give us the smallest amount of downside protection. These should be favored in neutral to bull market environments. Deeper out-of-the-money put strikes (much lower than current market value) should be considered in bear or volatile market scenarios.

We must first set a range for initial premium returns. Let’s say our range for initial returns is from 1-4% per month. To evaluate a real-life example, I have selected Applied Materials (AMAT), a stock on our Premium Stock List as of 5/17/2017. 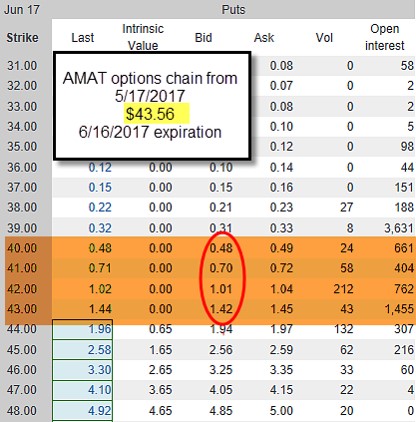 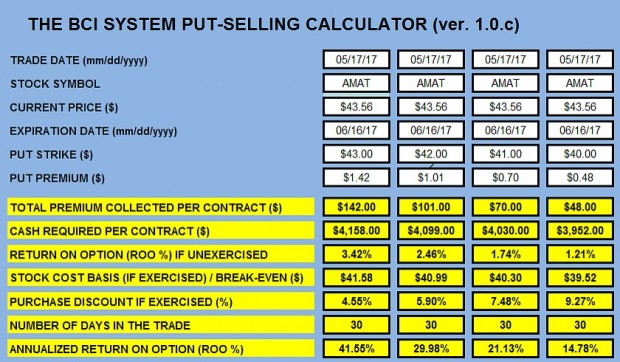 In a bull market environment, we would favor the $43.00 which yields a higher unexercised return. With a positive market tone, shares are less likely to move below the strike. In a bear market, we would favor the $40.00 strike where share value would have to decline by more than 9.27% before we start losing money. View these decisions as a negotiation where we base our choices on the tone of the market at the time. We can adjust on a monthly basis. Chart technical will also play a role in our bullish/bearish strike price decisions.

One of the main parameters we use when selecting strikes for put-selling (as well as covered call writing) is overall market tone. The deeper out-of-the-money we go, the lower the returns but the more downside protection we have. The closer to-the-money we go, the higher the initial returns and the lower the downside protection. One size does not fit all.

DuPont has a new ticker symbol

DD is now DWDP: DuPont from our Blue Chip Report:

All Stars of Options (just added)

Using options to Generate Monthly Cash and to Buy a Stock at a Discount.

The club charges $10 at door to cover expenses.

Global stocks rose modestly this week. The price of West Texas Intermediate crude oil rose to $49.87 from last Friday’s 47.59 while the Chicago Board Options Exchange Volatility Index (VIX) declined to 10.17 from 12.34. This week’s economic and international news of importance:

BCI: I am currently favoring in-the-money strikes 2-to-1.

Click here to cancel reply.
← Why Would a Call Buyer Exercise, Rather than Sell, an In-The-Money Call Option?
Earnings Reports and Rolling Options →