A covered call trade can be initiated by first purchasing the underlying stock or exchange-traded fund (ETF). It can also be launched by first selling an out-of-the-money (OTM) cash-secured put and allowing exercise if the put strike is in-the-money (ITM) at expiration. This article will highlight a real life trade with LogMein, Inc (LOGM) which began by selling a put option.

LOGM passed the required BCI screens as an eligible option-selling stock when it was trading at $106.50. The $100.00 OTM put was sold. Here is a screenshot of the BCI Put Calculator: 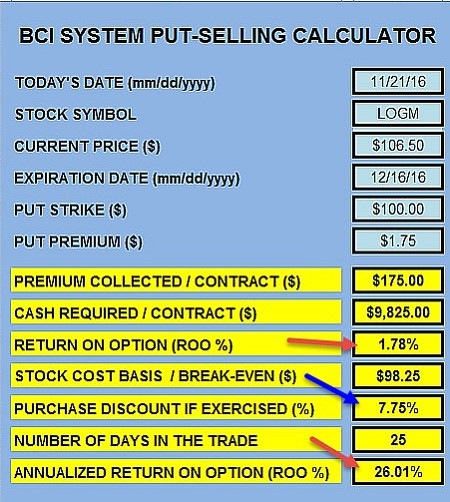 A defensive in-the-money covered call was selected since the chart pattern was no longer bullish. Here is a screenshot of the Ellman Calculator results from this call sale:

Overview of the series of trades 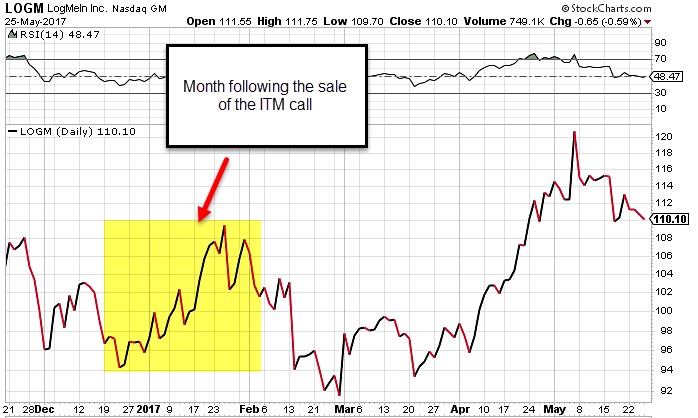 The put trade allowed us to by the stock at a 7.75% discount and the call trade put us in a position to generate a cash profit while allowing for additional downside protection. If the price of LOGM remained above the $95.00 call strike (which it did), a 4% 9-week profit will be realized even if the share price had declined by 10.8% (from $106.50 to $95.00).

Premium members: The June edition of the Blue Chip Report naming the best-performing Dow 30 stocks to consider for option-selling has been uploaded to your member site (“resources/downloads” section).

Global stocks rose this week, especially in the US where record highs were recorded. West Texas Intermediate crude fell to $48.95 a barrel from $50.30 a week ago as OPEC extended its output cap for another nine months. Volatility, as measured by the Chicago Board Options Exchange Volatility Index (VIX), slipped to 9.81 from 10.80 last Friday. This week’s reports and international news of importance:

BCI: It is remarkable how resilient the market has been despite the shocking political events taking place almost on a daily basis. I am currently holding an equal number of in-the-money and out-of-the-money strikes.