Should We Favor Put-Selling Over Covered Call Writing?

Many consider covered call writing and selling cash-secured puts the same strategy with the same risk-reward profiles. To me, they are similar with slight differences that must be understood to make a decision as to which strategy to favor. In the end, it will be like selecting between an ice cream sunday topped with whipped cream and one with hot fudge…both great and a simply matter of preference. That said, there are both similarities and differences and for those of you have my book, Alan Ellman’s Selling Cash-Secured Puts, I invite you to view the comparison chart on page 214. In this article, we will highlight two of the more common reasons given for favoring put-selling over covered call writing. Counter arguments will then be presented.

When we enter a covered call position, we have an opportunity for two income streams when we sell an out-of-the-money call, one from option premium and one from share appreciation up to the strike. Let’s say XYZ is trading at $47.50 and the $50.00 out-of-the-money call and the $45.00 out-of-the-money put both generate $1.00. The initial returns are similar with the put-sale generating a slightly higher initial return (since the put premium is deducted from the required cash to secure the put obligation). Our maximum profit from the put sale is locked in at 2.2% whereas the covered call has $2.50 of potential additional profit if share price moves to the $50.00 strike. If that occurs our new covered call profit would be $3.50/$47.50 = 7.4%, well above the 2.2% put profit. That additional $8.75 covered call commission now looks like money well spent when comparing it to the $250.00 per contract earned if share price moves to the strike.

Let’s play devil’s advocate a second time on this one. A proponent of put-selling may say that we counter the share appreciation potential from covered call writing by selling an in-the-money put and generate a higher premium and therefore a higher return. This is true and may work out but the basis of favoring put-selling with this argument is that the investor does not want to purchase the shares and by selling an in-the-money strike, there is a greater chance of those shares being “put” to us. Now we can avoid this by buying back the put but that would cost us an additional $12.50 in commissions using the hypothetical fees above. There is a possibility that in this scenario we are actually paying higher commissions for a put sale.

If a trader is favoring in-the-money puts, it would be best utilized in a bull market environment where there is an increased chance that share price will move above the put strike thereby eliminating inevitable exercise. However, in a bull market why not go with an out-of-the-money call and generate both income streams?

When share price rises, put strikes move deeper out-of-the-money while call strikes move deeper in-the-money. The argument suggests that the put bid-ask spreads will be tighter (closer) than those of call options. This is absolutely true but you know there are counter-arguments coming.

The two questions that come to mind are: 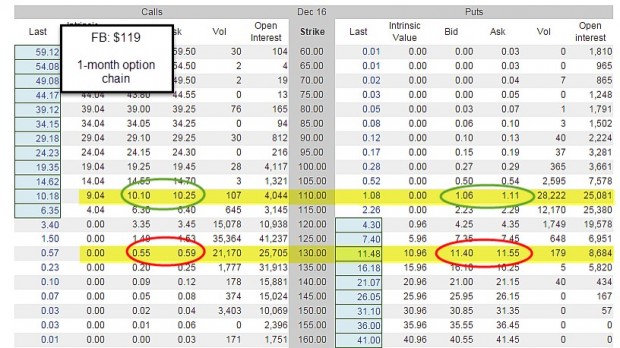 If share price moves up, the $110.00 strike would be $9.00 in-the-money on the call side and $9.00 out-of-the-money on the put side. The spread is $0.15 for calls and $0.05 for puts. Let’s give put-selling a $10.00 per-contract advantage in this regard. Now remember the $250.00 potential profit from share appreciation covered call writing offers when selling out-of-the-money strikes when factoring in spreads and determining the best strategy to utilize.

Furthermore, share value can also go down (has that ever happened to any of you?…me too). As an example, we look at the $130.00 strike which is $11.00 out-of-the-money for calls and $11.00 in-the-money for puts. Here we see a spread of $0.04 for calls and $0.15 for puts, similar to the above scenario when shares price rises. Even more egregious is the much higher cost to close the short puts ($11.55 versus $0.59) resulting from put value increasing when share price declines.

While it is true that put-selling may involve lower commissions than covered call writing and tighter spreads when share price rises, we must look at other pros and cons of these strategies and all circumstances in order to make an informed decision. I have made it clear over the years that I favor covered call writing but selling cash-secured puts (I generally do not favor margin accounts for most retail investors) is a wonderful strategy that can make us a lot of money when mastered. In bear markets, I use put-selling to enter a covered call trade (PCP strategy in my books and DVDs). It ultimately boils down to whether you like whipped cream or hot fudge.

Global stocks rose this week because of improved economic growth, especially in Europe. Slumping oil prices is a concern with the price of West Texas Intermediate crude falling to nearly a six-month low, ending the week near $45.50, down from $49.00 last Friday. Volatility, as measured by the Chicago Board Options Exchange Volatility Index (VIX), held steady at 10.57. This week’s reports and international news of importance:

BCI: With a solid earnings season and a positive employment report, I am moving to a slightly bullish portfolio tone favoring out-of-the-money strikes 3-to-2.

37 Responses to “Should We Favor Put-Selling Over Covered Call Writing?”

Click here to cancel reply.
← Calculations When an Unexpected Earnings Report is about to be Released
Is Covered Call Writing a Zero Sum Game? Let’s Do the Math →