In the BCI methodology for covered call writing we use predominantly 1-month options. The reasons are as follows:

When we look at a typical options chain we do note that there are several additional choices other than 1-month options and because these choices are not always the same from stock-to-stock, an explanation is required.

All options are defined by an expiration month and date (the third Friday of the month, except for some quarterly and weekly expirations of some securities) after which the contract becomes invalid and the right to exercise no longer exists. When options began trading in 1973, the CBOE (Chicago Board Options Exchange) decided that there would be only four months at a time when options could be traded. Stocks were then randomly assigned to one of three cycles:

The foregoing cycles proved to be a workable concept until options gained in popularity, increasing the demand for shorter-term options. In 1990, the CBOE decided that each stock (with options) would have the current and following months to trade, PLUS the next two months from the original cycle (hope your head isn’t starting to spin). Let’s simplify things by looking at the chart below: 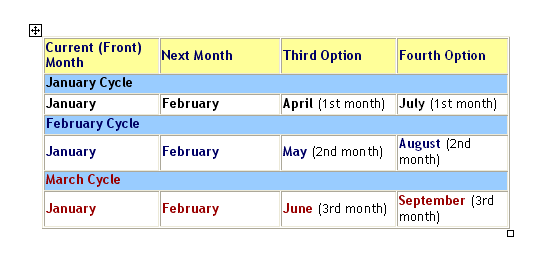 If the current month is January, we see that all options are available for both the current (January) and next month (February). The last two option expiration months available will depend on their original placement in one of the three cycles:

Now, if your head has stopped spinning and you’re feeling a bit better, I ask you NOT to put away the Tylenol, at least not yet! Here come the LEAPS (Long-term Equity Anticipation Securities), which are options with longer-term expirations. Only the more heavily traded securities such as Microsoft have these types of derivatives. LEAPS will have options with more than four months of expirations, with some having up to seven months to choose from. LEAPS can further complicate these cycles, however, those of you who follow the BCI system of selling predominantly 1-month call options need not be concerned with these extended expiration periods. However, intelligence does breed curiosity, so for those of you interested in learning more about LEAPS and potentially using these longer-term options as part of your covered call writing strategy, a more detailed discussion of same is included in my latest book, Alan Ellman’s Encyclopedia for Covered Call Writing.  For purposes of this article, simply take note that the vast majority of stock options will fall into the four month cycle depicted in the chart above. To determine which cycle an equity is assigned to you must look at the third and fourth expirations out as all securities will have the current and next month options available.

Lately, another breed of options has gained in popularity…the weeklys. They behave like monthly options in every respect except that they only exist for eight days. They are introduced each Thursday and they expire eight days later on Friday (with adjustments for holidays). Option traders should be diligent in checking expiration dates when viewing options chains on securities that have LEAPS and weeklys.

Most recently, we have seen the introduction of mini options which have only 10 shares (instead of the standard 100) per options contract. Although these only exist for 5 securities at the time this article is being written, that population will definitely expand and so even more diligence is required when examining options chains. Here is a screenshot of the options chain for Apple computer showing the new mini options: 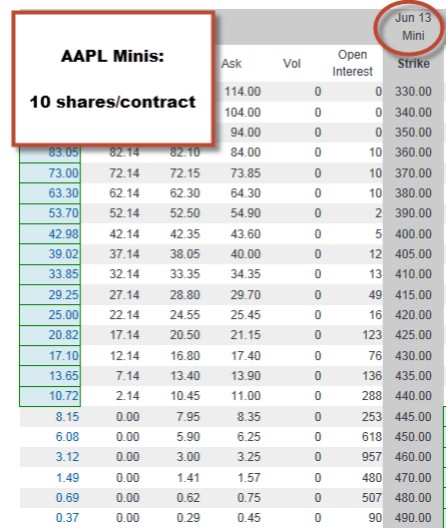 Most stocks still have the traditional 4 expiration choices but with the demand for more option products many have more. It is important to carefully determine the exact expiration date before entering into a covered call trade.

I’ll be taking the summer off for live events and then get back into action in September in Philadelphia.

Premium members may have noticed that we have enhanced the organization of the premium reports so that all reports are on the left side of the page organized by stock (5 recent reports), ETF (5 recent reports) and High Dividend Yield Stocks with LEAPS (most recent quarterly report) reports:

The market got a bit nervous this week as many worried that the Federal Reserve was about to decrease its bond buying program which now stands @ $85 billion per month. A change would be based on unemployment dropping below 6.5% and inflation moving above 2.5%. Here are this week’s mostly favorable reports:

Thanks to one and all for your continued support and loyalty.

Posted on May 25, 2013 by Alan Ellman in Investment Basics, Option Trading Basics

Click here to cancel reply.
← Should I Roll My Option When The Stock Price Is DEEP In-The-Money?
Examining A Covered Call Trade →