Technical Analysis and Covered Call Decisions: Looking Back At KORS

Technical analysis is an integral part of our covered call writing decisions for both stock and option selections. It also impacts our exit strategy decisions. KORS has been a favorite of Blue Collar Investors for quite some time as a frequent member of our Premium Stock List. For the week of September 16th through the 20th, KORS was ‘bumped” from our Premium Watch List because of weakening technicals and BCI members were wondering whether to roll the option at expiration Friday. Here is a look at the bearish-leaning price chart that week: 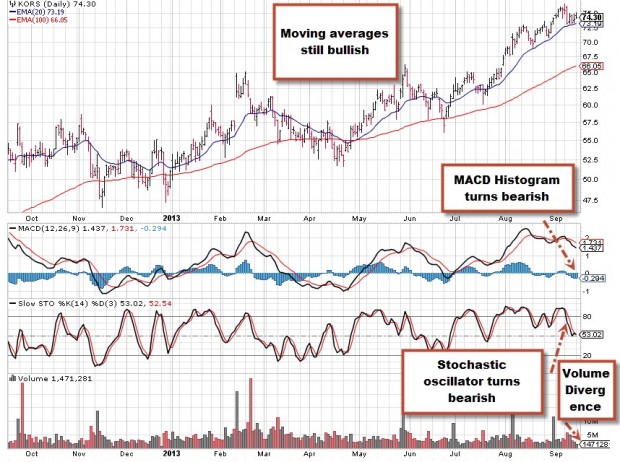 Since the price of this equity had been rising, most of our members were faced with the decision to either roll the option or allow assignment. The earnings were not due out until November 5th. One of our BCI guidelines is to roll out rather than out-and-up if technicals are mixed. Here is a screenshot of an options chain I created when KORS was trading @ $74.30 and considering rolling out to the $72.50 strike: 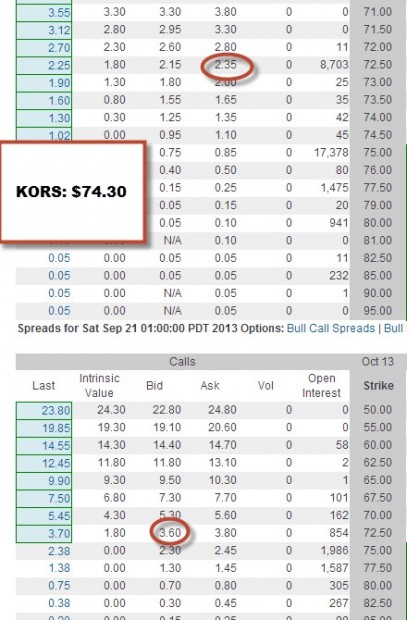 When feeding this information into The Ellman Calculator we generate a 1.7%, 1-month return (21% annualized) with 2.4% protection of that profit. If those stats meet your goals, rolling out should be considered.

Next, let’s take a look at a chart from that date moving forward:

Technicals are important but not our only considerations. We also view our overall market assessment and personal risk tolerance to make our final covered call writing decisions.

Technical analysis plays a vital role in our covered call writing decisions. We are more inclined to take a bullish stance when technicals are all confirming and bullish and a conservative approach when the technicals are mixed. There are no guarantees that this approach will work every time but it will absolutely throw the odds dramatically in our favor.

On January 17th, 2014 we will be raising subscription rates for both monthly and annual memberships. Current members will be grandfathered in to the current lower rates and need to take no action to retain this lower fee schedule. All new members who subscribe prior to January 17th will also be grandfathered in to the lower rates. Thanks for the positive feedback we have received for the new and enhanced version of our Premium Stock reports.

The Federal Reserve’s announcement to reduce its bond-buying program gradually was embraced by the stock market in a big way. This was a concern of mine the past few weeks and the reason I turned more conservative in my covered call positions in the past contract period. That’s now behind us. The economic reports for the week were generally positive:

Wishing our BCI community a happy new year and a prosperous and healthy 2014,

11 Responses to “Technical Analysis and Covered Call Decisions: Looking Back At KORS”