Technical Market Theories:More Tools for the Technical Analyst plus Industry in the Spotlight

Chapter 8 in Cashing in on Covered Calls is devoted to technical analysis. This is a method of predicting future stock price movements based on observation of historical stock price movements. We use it to identify trends and for our buy/sell decisions.  The parameters I chose for my system include moving averages, MACD, stochastics and volume. These indicators paint a picture that allow us to enhance our investment decisions.

Another set of tools available to the technical analyst are the numerous theories regarding market activity. They, too, reference historical patterns in the market that may signal a bullish or bearish sentiment. The purpose of this article is to present an overview of some of these theories and the rationale behind them.

This theory states that a larger short interest is the predecessor of an increase in the price of a stock.

A short sale is the sale of a stock  not owned by the seller. It is borrowed from the broker and eventually must be replaced. The seller anticipates a decline in equity value and realizes a profit by covering (buying back) the short sale at a lower price in the future.

Short interest is the number of shares sold short that have yet to be covered. Shares ultimately will need to be purchased. Also, some short sellers fearing an increase in stock price, may cover their positions sooner than anticipated. This is called a short squeeze. A rising short interest is considered a bullish indicator.

This is the ultimate insult to everyone in our group! This theory is based on the assumption that the small investor is always wrong (bring it on!). Since these investors usually buy and sell in odd-lot amounts (less than 100 shares) and have low risk-tolerance (the theory continues), they tend to buy high and sell low. A bullish signal is when odd-lot sell orders increase relative to odd-lot buy orders.

Also called the Breadth of Market Theory, this theory states that the market direction can be determined by the number of stocks that have increased compared to those that have decreased in value. It is considered bullish if more shares are advancing than declining.

This theory states that the market is in an upward trend if one of the averages (industrial or transportation) advances above a previous significant high and is accompanied by a similar advance in the other. A major trend is identified only when BOTH the Dow Industrial and Dow Transportation Averages reach a new high or a new low. Without this confirmation, the market will return to its previous trading pattern.

Industry in the Spotlight:

Who says that there is a recession? One of the best performing industries over the past few months is the Casino and Gaming Group. I recently had family gatherings in Atlantic City as well as in Las Vegas and I can attest to the fact that the gamblers are out in full force. That’s not to say that this group didn’t take a big hit during the heart of the recession, but it appears to be recovering very nicely of late. The industry ranks in the top 10% of new institutional money flowing into its group’s equities. Here is a current chart of this industry: 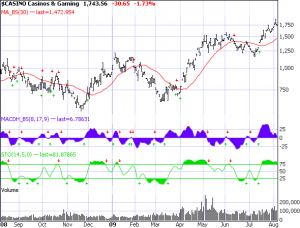 Note how we have identified a trend which is confirmed by all supporting indicators. The top-performing security within this industry is WMS. Here is the current chart of that stock: 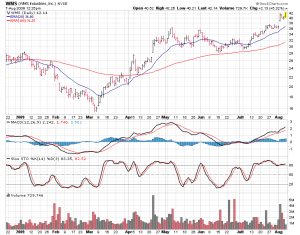 They say a picture is worth a thousand words! Another good performer in this industry is ASCA.

Although service-sector business activity, personal income and real consumer spending declined, there were some positive reports. The manufacturing index as published by the Institute of Supply Management (ISM) increased for the seventh straight month. Also, the jobless rate in July dropped to 9.4% from 9.5% in June, the first decline since April of 2008. For the week, The S&P 500 rose by 2.3% for a year-to-date return of 13.6%.

Video now playing on the homepage:

Posted on August 8, 2009 by Alan Ellman in Technical Analysis

15 Responses to “Technical Market Theories:More Tools for the Technical Analyst plus Industry in the Spotlight”