Stock and ETF (exchange-traded fund) selection is one of the three required skills needed to achieve the highest level of success when selling options. Covered call writers and put-sellers have varying degrees of personal risk tolerance and trading styles. As a result, over the years and based on member feedback, the BCI team has added additional screening service reports for our members along with our core stock reports. Since we are beginning a new contract month and because we have had such a large growth in premium membership recently, I thought it would be beneficial to write an article showing how we can fund our covered call writing and put-selling portfolios using three of our reports. The securities shown do come from our most recent reports but do not include the 11/18/2016 stock report which was not produced at the time I am writing this article. These are not necessarily specific recommendations but rather intended to show one of the many ways these screened reports can be utilized. In this article, we will fund a portfolio with $100,000.00 cash available.

Reports used to fund our portfolio

Screens for the top-performing exchange-traded funds over the past 3 months that have adequate option liquidity. We will focus in on page 4 of the report that charts the top 3 Select Sector SPDRs which will utilize the top one third of the S&P 500 from a performance perspective. Here is a screenshot taken from the 11/16/2016 report: 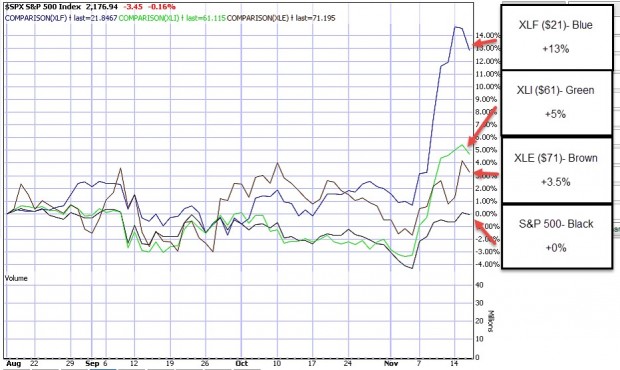 Quarterly screen for top-performing Dow 30 stocks. Eligible candidates have out-performed the S&P 500 over the past three months as well as the past one year. Here is a screenshot taken from the 4th quarter, 2016 report: 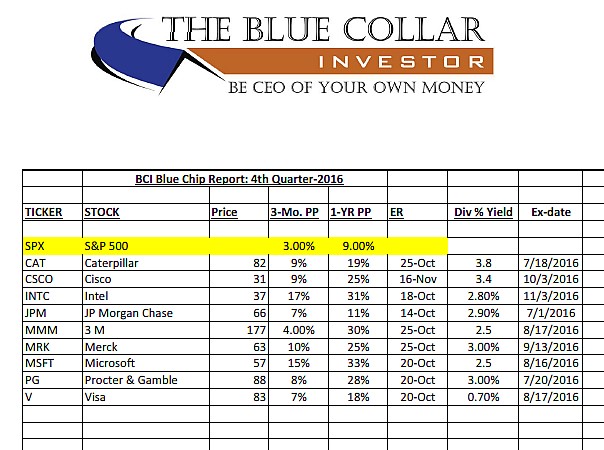 This report is the foundation of the BCI methodology. It involves fundamental analysis, technical analysis and common sense screening. Here is a partial screenshot taken from the 11/11/2016 report:

Blue Chip Report (watching prices as we are allocating about $8,000.00 per position; avoid expensive stocks)

Stock report (favoring bold, high industry ranks of “A” or “B” and diversification)

Shares will cost $95,087.00 leaving $4913.00 for commissions (must use online discount brokers with LOW commissions) and exit strategy opportunities. 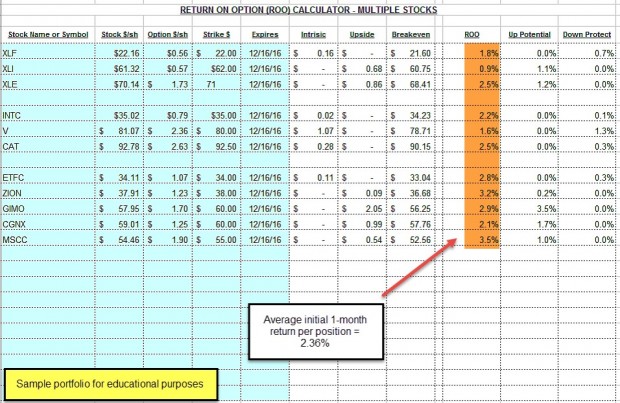 The overall portfolio initial 1-month return average is 2.36% The stock report (bottom five securities) offered the highest initial returns followed by the blue chip report (middle three) and then the ETF report (top three) …no surprise there. Here’s the breakdown of the averages from each report:

Keep in mind that I did not have available this weekend’s stock report which I will be using to fund my personal portfolios next week. Also, the stats were taken on Friday morning but should be reflective of typical returns.

There are many ways to screen for option-selling candidates. This article presented three screens that can be utilized based on personal risk tolerance and strategy goals. I favor the BCI Premium Stock Reports in my portfolios and the ETF Reports in my mother’s one portfolio. There is no right or wrong here as long as our decisions are non-emotional and based on sound fundamental, technical and common sense principles. Finally, (and I know you saw this coming), once our positions are entered, we must be prepared for potential exit strategy opportunities.

Premium members login and scroll down on the left side as shown in the screenshot below (top screenshot). General members can purchase a seat at the Blue Collar store (https://www.thebluecollarinvestor.com/store/) as shown in the lower screenshot:

***Thanks for submitting so many great questions. I will respond to 3 or 4 as part of the webinar presentation.

Global stocks moved up this week on continued hopes that looser US fiscal policy will quicken the pace of global economic growth. Volatility, as measured by the Chicago Board Options Exchange Volatility Index (VIX) fell to 12.85 from 15.5 a week ago. Oil prices rose slightly ahead of a meeting between Saudi and Russian oil ministers, who are trying to broker a production cut. This week’s reports and international news of importance:

BCI: The market has successfully absorbed the election results and so it’s back to business as usual for The Ellman portfolios. I plan to fully fund my portfolios and that of my mother with securities selected from the 3 reports alluded to in this article. I will take a cautious approach by selling an equal number of in-the-money and out-of-the-money strikes.